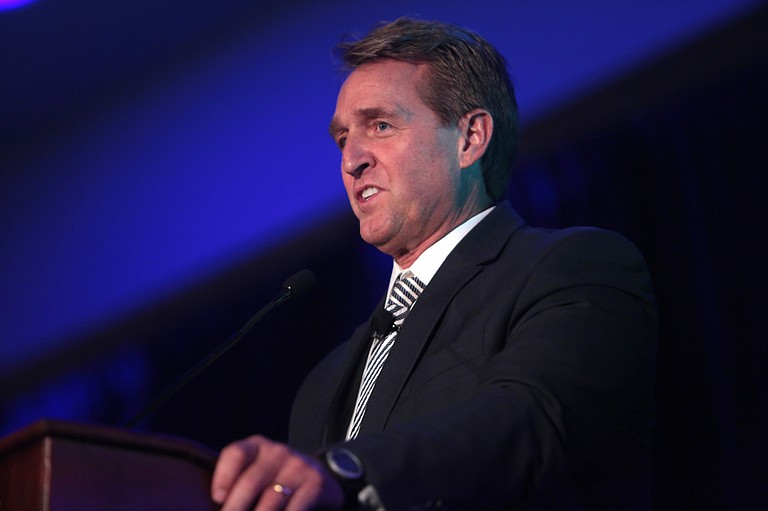 Sen. Jeff Flake, R-Ariz., who has introduced his own immigration legislation, said it was unlikely the Senate would accept a proposal slashing legal immigration, noting that any DACA legislation will have to attract Democratic support. Photo courtesy Flickr/Gage Skidmore

WASHINGTON (AP) — The Trump administration is finalizing the details of a set of immigration principles that could upend efforts to come up with a permanent fix for the status of young immigrants who came to the country illegally as children.

The principles, according to people familiar with ongoing discussions, were expected to include elements of proposed legislation that would dramatically reduce legal immigration rates. Also to be pursued was an overhaul of the green card system to prevent extended family members, including siblings and adult children, from joining permanent residents in the U.S.

It remained unclear whether the principles, which were expected to be announced in the coming days, would serve as a broad immigration wish-list or specific demands the White House expected in exchange for signing legislation for the Deferred Action for Childhood Arrivals program, or DACA.

Under a phase-out plan announced last month by President Donald Trump, more than 150,000 young people covered by DACA, often known as "Dreamers," whose permits were set to expire before March 5 were given the chance to submit renewals — provided they arrived by midnight Thursday.

Trump gave Congress six months to come up with a legislative replacement for the program. It shielded from deportation hundreds of thousands of young people, many of whom were brought into the U.S. illegally as children, and allowed them to work legally in the country.

While final numbers won't be available until next week, DHS spokesman David Lapan said that about 118,000 of the roughly 154,000 people eligible for renewals had submitted their applications by mid-day Thursday. That left 36,000 — or about 23 percent of those eligible — outstanding. Facilities processing applications were prepared to accept courier deliveries until midnight, he said.

But Ali Noorani, the executive director of the immigration advocacy group National Immigration Forum, said that, if those expectations held true, there was little chance for a DACA deal.

"If the president winds up tying these elements to the DREAM Act," he said, Trump would wind up responsible "for deporting 800,000 young people, which pretty much nobody wants except Stephen Miller," Trump's hard-line senior policy adviser, who was working on the principles.

Immigration advocates spent weeks trying to publicize Thursday's DACA deadline. Earlier this week, dozens of DACA recipients traveled to Washington to try to pressure members of Congress to vote on the Dream Act, which would provide an eventual path to citizenship.

"This is a landmark opportunity to fix the DACA problem and once and for all fix the vagaries of this immigration system that really doesn't work," he said.

But Sen. Jeff Flake, R-Ariz., who has introduced his own immigration legislation, said it was unlikely the Senate would accept a proposal slashing legal immigration, noting that any DACA legislation will have to attract Democratic support.

"With the deadline we have with DACA, I think it's unrealistic to think we can do broader immigration reform like that," he said. "I don't see that happening."