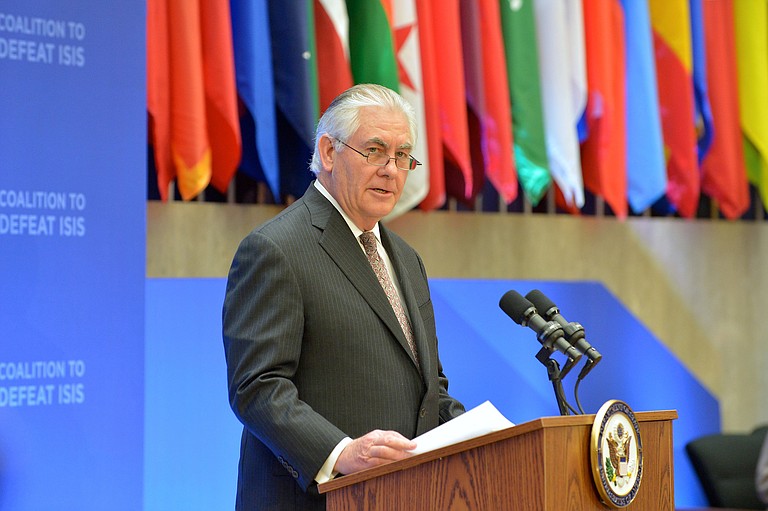 WASHINGTON (AP) — The Trump administration readied new sanctions Tuesday on North Korea, a day after declaring it a state sponsor of terrorism in a move to put additional pressure on Pyongyang's nuclear program.

North Korea has joined Iran, Sudan and Syria on America's terror blacklist, a largely symbolic step as the administration already has the authority to impose virtually any sanctions it wants on Kim Jong Un's government over its nuclear weapons development.

As part of its "maximum pressure" campaign, President Donald Trump said the Treasury Department would impose more sanctions on North Korea and "related persons" starting Tuesday, without hinting who or what would be targeted. The move is part of rolling effort to deprive Pyongyang of funds for its nuclear and missile programs and leave it internationally isolated.

"It will be the highest level of sanctions by the time it's finished over a two-week period," Trump said.

Secretary of State Rex Tillerson said Monday the pressure campaign was starting to bite in Pyongyang, which is already facing unprecedented U.N.-mandated sanctions over its nuclear and ballistic missile tests. Tillerson said anecdotal evidence and intelligence suggests the North is now suffering fuel shortages, with queues at gas stations, and its revenues are down.

The United States has been applying sanctions of its own as well.

Lu said Tuesday that the situation is "highly sensitive" and that it would be "helpful to bring all parties back to the negotiation table instead of doing the opposite."

Da Zhigang, a North Korea expert at the Heilongjiang Academy of Social Sciences, said the move "will arouse diplomatic reactions and hatred toward the U.S. from North Korea" and could even prompt the North to resume missile tests.

An editorial Tuesday in North Korea's ruling party newspaper, Rodong Sinmun, called Trump a "heinous criminal" who had insulted the dignity of the country's supreme leadership and its socialist system during his recent visit to South Korea. The editorial, carried by the state-run news agency, threatened "merciless punishment." It did not mention the terror designation.

In September, Trump opened the way for the U.S. to punish foreign companies dealing with North Korea. He issued an executive order expanding the Treasury Department's ability to target anyone conducting significant trade in goods, services or technology with the North, and to ban them from interacting with the U.S. financial system.

Bruce Klingner, senior research fellow on Northeast Asia at the conservative Heritage Foundation, said Treasury could be preparing more designations against North Korean entities related to the terrorism listing, or possibly Chinese or other companies violating the September order.

A potential target would be Chinese banks that serve as North Korea's conduit to the international system. Such a move would irk Beijing, whose help Trump is counting on to put an economic squeeze on Pyongyang. China recently sent its highest-level envoy to North Korea in two years to discuss the tense state of affairs on the Korean Peninsula.

Tillerson urged China, which accounts for 90 percent of North Korea's external trade, to take unilateral steps to cut fuel supplies to its wayward neighbor. China, which is calling for dialogue to ease the nuclear tensions, is reluctant to exert economic pressure that could destabilize the North.

Tillerson acknowledged a two-month pause in the North's rapid tempo of nuclear and missile tests and said there was still hope for diplomacy. With tougher sanctions in the offing, he warned Kim, "This is only going to get worse until you're ready to come and talk."

The terror designation, however, is likely to exacerbate sour relations between Washington and Pyongyang that have turned uglier with name-calling between Trump and Kim. North Korea shows no interest in talks aimed at getting it to give up its nukes.

North Korea has been on and off the terror list over the years. It was designated for two decades because of its involvement in international terror attacks in the 1980s, then taken off in 2008 to smooth the way for nuclear talks that soon failed.