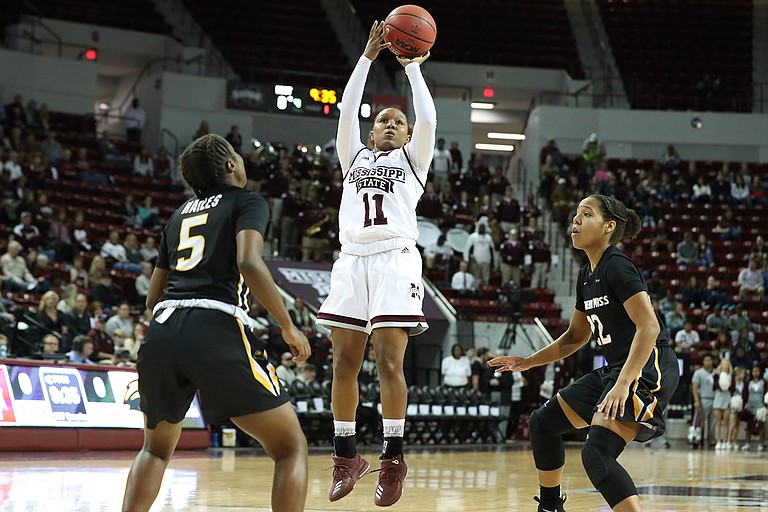 The seventh-ranked Bulldogs have used a four-guard lineup that has been giving teams problems, and it was successful once against in a 91-56 victory over Southern Mississippi on Sunday.

"The four-guard lineup is evolving and I think it's here to stay," Mississippi State coach Vic Schaefer said. "When we make shots the way we did, it's not only fun to watch but it's fun to coach. I can't say that I've ever coached a team that shot the ball as well as they have."

Thanks to a career-high 29 points from Roshunda Johnson, the Bulldogs rolled to a 3-0 start with the blowout win in front of 5,321 fans at Humphrey Coliseum.

The Bulldogs also got a double-double from Teaira McCowan with 17 points and 10 rebounds. Victoria Vivians had 15 points and Blair Schaefer finished with 10 points and seven rebounds.

Johnson made 11 of 20 shots from the field, including 5 of 11 from 3-point range. She also had two steals defensively.

"I've still got a lot to work on but coach told me that I had to have a good defensive ball game," Johnson said. "I felt like my defense led to my offense."

Mississippi State played well on both ends of the floor as they took control of the game in the first quarter with a 31-8 advantage. The Bulldogs were outscored in the second quarter but still had a comfortable 48-26 halftime lead.

"I thought in that first quarter that they could win a national championship. They shot the cover off of the ball," Southern Miss coach Joye Lee-McNelis said. "If you can shoot it the way they did to start the basketball game, it shows how good they really are."

Morgan William had her 500th career assist and continued to build on her school record with nine of them against the Golden Eagles. She has 24 assists and zero turnovers so far this season.

Mississippi State had a 44-28 rebounding advantage. The Bulldogs also forced 26 turnovers and had 25 assists. The Bulldogs made 13 of 29 3-point attempts (44.8 percent).

Mississippi State: The Bulldogs won all three of their games at home to start the season and will travel to Mexico for the Cancun Challenge next week.

Southern Miss: This was the first setback of the season for the Golden Eagles, who won their previous three games before Sunday.