Gone But Not Forgotten in Mt. Olive Cemetery 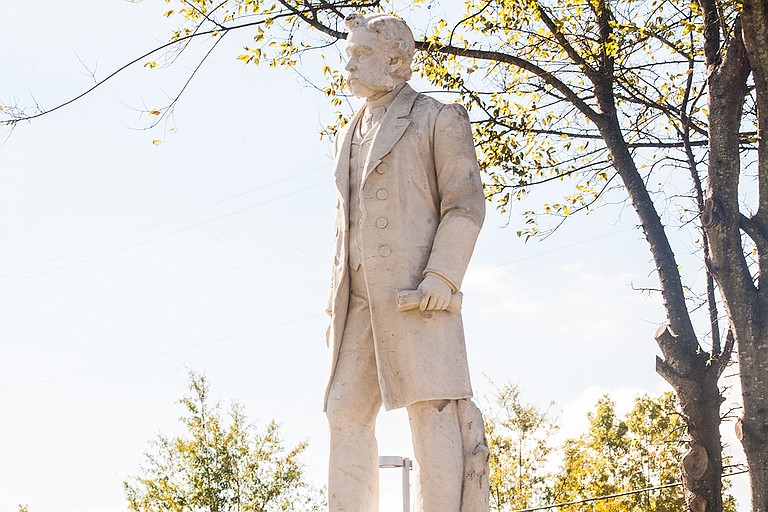 JACKSON — As a boy growing up in west Jackson, Larry Thurman said he used to go down to Mt. Olive Cemetery on John R. Lynch Street to play around the statue of James (Jim) Hill, a former slave who was elected during Reconstruction as Mississippi's secretary of state from 1874-1878, becoming one of the few African Americans elected statewide in Mississippi.

Coming of age during the wave of segregation, Thurman is a proud 1972 graduate of Jim Hill High School, where he now teaches. On Nov. 9, he stood admiring that same statue, which has been newly refurbished, hoping that it offers his students, who also stood in the cemetery laughing and joyful, "renewed pride and respect for an area that once thrived and served African Americans when nobody else would."

Amid a national discussion on which monuments of old white men should stay or go, Jackson State University unveiled two refurbished ones that day dedicated to Mississippians who achieved benchmarks they would not even have dared to dream of before the South lost the Civil War. Or since Reconstruction ended, in Hill's case; state voters have not elected another black person to statewide office since a federal compromise ended Reconstruction in 1877.

The other refurbished monument is for Ida Revels Redmond, who was an organizer around women's self-improvement and social services for youth, voter-registration drives and solutions to other inequities. She was the daughter of Hiram Revels who was the first African American to serve in the U.S. Congress for Mississippi in 1870 and 1871. Her son, Sydney Revels Redmond, was an NAACP lawyer.

About halfway through a hour-long program on Nov. 9 celebrating the statues at nearby Jackson State University, Heather Wilcox, a neighborhood development assistant at JSU's Center for University-Based Development, stepped to the podium at the Amour event space. She got visibly emotional, choking back tears as she thanked her family and loved ones who supported her research and statue-preservation efforts.

"It made me emotional because we're in the state of Mississippi," Wilcox told the Jackson Free Press later. "To know that there was servitude and there were slaves and many of them are buried in the cemetery, and that we have these beautiful statues that we want to pay homage to, but they weren't able to be built anywhere else but a cemetery—it makes you emotional, it makes you cry."

Historic African American cemeteries are the only place where statues of black people would have been erected in the early to mid-1900s. They were out of the public eye and never visible to the deceased people who had dedicated their lives to swimming upstream against currents of racism and the structural discrimination that made them second-class citizens in the South.

Wilcox's research on Mt. Olive Cemetery is documented in a 33-page pamphlet including 1,461 records of individuals buried there likely between 1909 and 1943. The locations of the 268 identifiable burial sites are also online at jsums.edu/cubd.

The men buried there had a range of jobs from blacksmiths and brick masons to physicians and even umbrella repairers. Many of the men and women lived in the Washington Addition neighborhood south of the cemetery and adjacent now to Jim Hill High School. Nearly a quarter of those buried in Mt. Olive were children under age 5. Approximately 77 percent of the African American women whose jobs are known were domestic laborers.

Virginia Ford, who is buried in Mt. Olive, was a midwife and later became a school teacher at Smith Robertson School, Jackson's first public school for African Americans. Ford's mother, Mary Green Scott, was born into slavery, and the homes they lived in, respectively, are the cornerstone of a restoration project. Scott, as well as Ford's husband, are also buried in the Mt. Olive Cemetery.

Wilcox hopes that their legacy among others in the cemetery will not be forgotten. "Today, I feel like we really told their stories, and we helped carry on their legacy," she said, "and we're really excited about that."

Stuart Rockoff, executive director of the Humanities Council, said Mt. Olive was selected as an "ideal bicentennial project" for their grant program because it uplifts the story of the west Jackson African American community, especially given the national conversation surrounding Confederate monuments.

"Monuments aren't the same as history," Rockoff said. "They are a version of history. So to call attention to things that present a fuller picture is just wonderful."