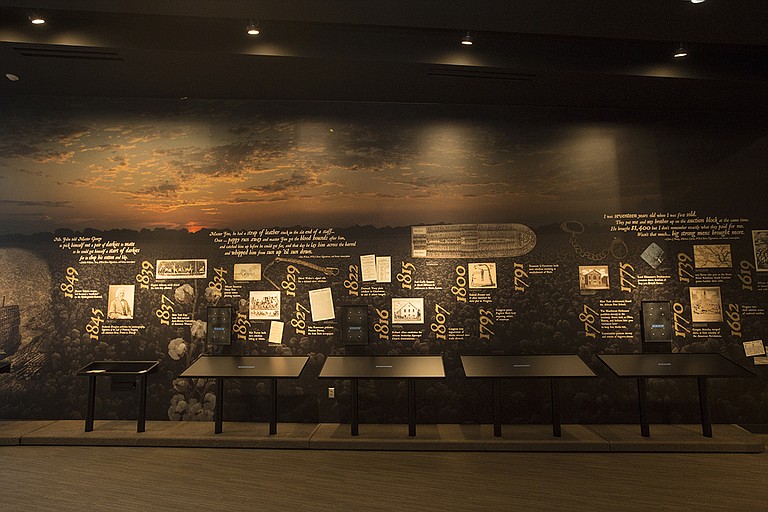 The Mississippi Civil Rights Museum and the Museum of Mississippi History—two entities under a single roof—are opening Dec. 9 for the state's bicentennial in downtown Jackson. Photo by Imani Khayyam.

JACKSON, Miss. (AP) — The family of a man killed in 1966 by the Ku Klux Klan received a private preview Friday of the Mississippi Civil Rights Museum that is opening next month.

Vernon Dahmer (DAY'-mur) of Hattiesburg was targeted because he encouraged fellow African-Americans to register to vote during the Jim Crow era.

His widow, 92-year-old Ellie Dahmer, toured the museum with four surviving children and several other relatives. It includes a gallery with photos and descriptions of how the Dahmer home was firebombed. Pieces of the family's burned pickup truck are also on display.

"I think Mississippi's come a long ways to even want to put something up to portray what really happened to people during the civil rights movement," Ellie Dahmer said. "We lived it. Some of them died with it. The rest of Mississippi needs to know about it."

The Mississippi Civil Rights Museum and the Museum of Mississippi History—two entities under a single roof—are opening Dec. 9 for the state's bicentennial in downtown Jackson.

Daughter Bettie Dahmer, 62, said she hopes young people, particularly those from poor areas of Mississippi, will visit the museum to learn about the state's troubled history that includes lynching and other violence.

Vernon Dahmer was a farmer and shop owner and served as president of the Forrest County NAACP. His family's home was a haven for young civil rights workers who were challenging state-sponsored racial oppression, and he became a Klan target in January 1966 when he went on the radio and announced he would pay the poll tax for people who couldn't afford it.

Dennis Dahmer, then 11, was asleep in the family home when Klansmen set it ablaze on Jan. 10, 1966. He said his family owned several guns because they lived in the country and liked to hunt. Dennis Dahmer said as the fire raged, his father went from window to window shooting out at Klansmen who were waiting outside to attack the family.

"From what we read (in) the FBI files, these Klansmen — they had the house completely surrounded," Dennis Dahmer, now 64, said Friday at the museum. "They were waiting for us to run out there so they could kill us."

The family escaped from the back of the house. Vernon Dahmer's lungs were seared by the heat and he died of his injuries.

A jury in 1998 convicted one-time Klan leader Sam Bowers of murder and arson in Dahmer's killing. Bowers was sentenced to life and died in prison in 2006.

The civil rights museum also includes exhibits of other pivotal figures in the push for racial equality, including Medgar Evers, the Mississippi NAACP leader who was assassinated outside his Jackson home in 1963.