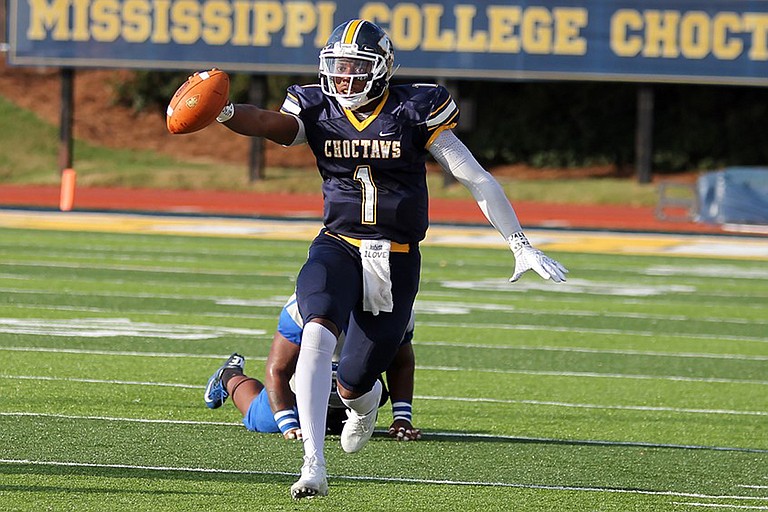 On Nov. 4, the Choctaws were still under the weight of a nine-game losing streak that dated back to last season. Shorter, which was on a 26-game losing streak, had not won a game since Oct. 3, 2015, when the Hawks beat MC.

One team was going to get its first win of the season, and the other would be staring down the barrel of a possible winless season. Luckily for the Choctaws, Mississippi College quarterback Ty Jobe was a double-threat to the Shorter defense, with his passing and running game helping MC scrape out a 30-29 victory.

The junior quarterback got some help on the opening kickoff from receiver Chakel Gates, who returned the ball 83 yards to Shorter's 16-yard line. Jobe hit paydirt five plays later, as he scampered into the endzone for a touchdown and gave MC a 7-0 lead.

After Shorter punted, Jobe went back to work again at MC's two-yard line. The Lebanon, Tenn., native rushed for 49 yards on the drive to help set up kicker Greg Nickles' 36-yard field goal that gave the Choctaws a 10-0 lead.

The Hawks punted again on their second possession, and Jobe helped lead MC down the field once more. The Choctaws' drive ended up stalling at the Shorter nine-yard line, but it was the perfect field position for another Nickles field goal, which put MC in the lead 13-0.

Both teams traded punts before the Hawks finally got their offense going in the middle of the second quarter. Shorter quarterback Tyler Pullum's deep pass found its mark and ended up in the end zone, cutting MC's lead to 13-7.

Mississippi College took advantage of another good kickoff return and a Shorter penalty to set up good field position. Jobe ran for three yards on the opening play of the drive and found wide receiver Darius Young for a 34-yard touchdown pass, extending the Choctaws' lead to 20-7. Neither team was able to score again before the break.

Shorter took the second-half kickoff to the Choctaws' four-yard line before turning the ball over on downs. Jobe took one snap on the next drive and ran for three yards. Aaron Feazelle replaced him on that drive, which ended with a one-yard touchdown run that gave MC a 27-7 lead.  The Hawks' passing game got hot on Shorter's next drive, as Pullum completed throws for 18, 14, 22 and 20 yards. Shorter scored a touchdown and converted a two-point conversion, cutting the MC lead to 27-15.

Then, it was Mississippi College's turn to stall on offense, with Jobe on the sideline. The Hawks forced the Choctaws to punt, and Shorter pounced, quickly moving down the field against the Choctaws' defense on the next drive. Shorter ended up finding the end zone once more with a 40-yard touchdown pass, and the Hawks completed a second two-point conversion, bringing the score to 23-27.

Feazelle, still filling in for Jobe, threw an interception on the next MC drive, and Shorter needed just two plays for Pullum to throw for his fourth touchdown of the day. The Hawks failed to convert their third two-point conversion but took their first lead at 29-27.

Jobe finally returned, but on the first play of the drive, MC running back Tiberias Lampkin fumbled on a 10-yard run. Shorter recovered the fumble and looked to put the Choctaws away after the turnover.

The Hawks drove to the MC 16-yard line before the Choctaws' defense forced a field-goal attempt, which went wide right. Jobe and the MC offense took over at their own 20-yard line with two minutes and 54 seconds left in the game.

Jobe used both his arm and legs to quickly move the Choctaws down the field, running for 21 yards and throwing for 51 yards to reach the Shorter eight-yard line.

Nickles connected on his third field goal of the day—this time, a 25-yard, game-winning kick—as time expired to give the Choctaws a 30-29 win. MC earned its first win on its final home game of the season, which also happened to be Senior Day.

Jobe finished the game with two touchdowns, 101 passing yards after completing nine of 14 passes, and 103 rushing yards on 15 carries.

He has done a little of everything for MC in his first season with the Choctaws, following a transfer from Tennessee Technological University. He has thrown for 795 yards with three touchdowns and four interceptions, rushed for 174 yards and four touchdowns, punted three times for 111 yards, made one reception for nine yards and completed one two-point conversion.

Mississippi College ends the season facing off against the University of North Alabama this Saturday, Nov. 11. This will be the final game for North Alabama at the Division II level, since the program will begin moving to Division I next season.