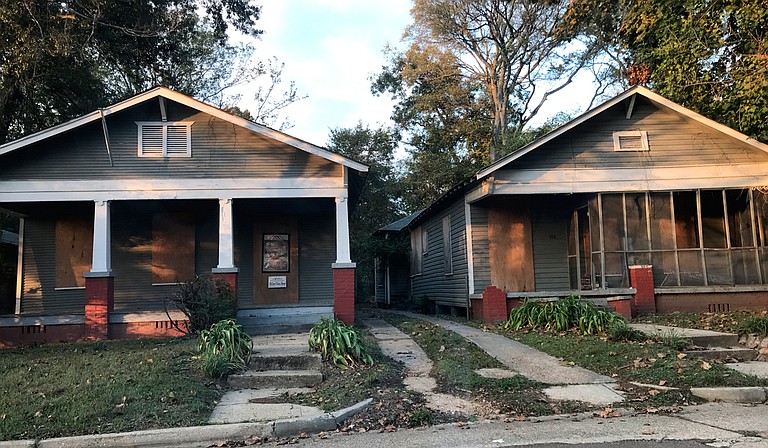 The Scott Ford Houses on Cohea Street, now falling apart, were once home to a former slave and her daughter, a midwife. Photo by Ko Bragg

JACKSON — People sit at a black folding table in a front yard playing cards, while others watch cars pass with an occasional wave. The scene is common throughout much of Jackson, but it is a rare sign of life on Cohea Street in the once-vibrant Farish Street district.

Cohea Street runs perpendicular to Farish Street, once the "spinal cord" of the black business district, as "The WPA Guide to the Magnolia State" described it in 1938. "On Saturday nights this street, swarming with shoppers and pleasure seekers, has a carnival atmosphere," the book reads. It refers to law offices, betterment societies, auditoriums, dance halls and pool rooms that dotted the district.

Now, the overgrown foliage in front of abandoned houses on Cohea makes it feel like the street is closing in on itself. One home has become a shell and only the front remains—there is no siding because there are no sides. The mile-long street dead-ends at a cemetery—a tangible reminder of the lifelessness that plagues the neighborhood.

The Scott Ford Houses at 136 and 138 Cohea Street sit virtually indistinguishable from other houses on that block. The windows and doors are boarded up, the house frame slants, the outdoor paint, though freshly white, pills visibly. But what is invisible to the eye is that a single black family owned those houses for more than 100 years.

Erected around 1891, only about 25 years after the end of slavery, the homes belonged to a former slave woman who became a maid, Mary Green Scott, and her daughter, Virginia Ford, who worked as a midwife.

Dr. Alferdteen Harrison, a retired Jackson State University professor and chairwoman of Scott Ford Houses Inc., is leading an effort to restore the houses as timepieces demonstrating African American life between slavery and the Civil Rights Movement. The homes are at risk unless she can get funding to restore houses that seem to dilapidate by the hour.

Virginia Ford's granddaughter, Dorothy Dobbins, left the homes to Scott Ford Houses, Inc., a nonprofit established in 1995 to preserve the story of the home and the Scott and Ford families. Since then, the financial management fell through the cracks, and the houses went up for tax sale. The nonprofit had realized too late that the woman who promised to pay the taxes on the homes had not followed through.

Eula V. Polk, the 105-year-old daughter of a midwife, is pictured to the right with her niece, Dollie Gathings (standing). Photo by Ko Bragg

"We were going to tear them down and put new homes there," Chapman told the Jackson Free Press. "But, this had more history to do with the community and their interest and so on, and we had (other) lots where we could do what we wanted."

Chapman is also responsible for the Helm Place Housing developments that are right around the corner from the Scott Ford homes.

In September 2015, Harrison partnered with a community fund based in Jackson that acts as an "investment bank for charity," as Jane Alexander, president and CEO of the Community Foundation for Mississippi, describes it. Alexander hopes donors will unite around the fact that the Scott Ford legacy is more than just about the African American community; it is also a "lost chapter of how everyday folks experienced life," she said.

Alexander and Harrison are hopeful that the houses' inclusion on Heritage Trust's new list of the 10 most endangered sites in Mississippi will inspire people to donate money to preserve them.

Scott Ford Houses Inc. hosted a talk series at the Smith Robertson Museum from September 2016 through September of this year to share midwife stories.

To date, the nonprofit has raised just over $100,000 through grants and community investments. The organization estimates it would require $500,000 for renovations to create a museum complex and an additional $500,000 for administrative staff, a midwife database and office space.

Scott and Ford lived side-by-side on Cohea Street in the late 1800s. Ford was a practicing midwife and lived in the home with her husband, John Ford. Her mother, Scott, had come to Jackson right out of slavery and worked as a maid. Scott learned about buying property, and she saved the money to buy the land where her home and her daughter's home still stand. There is evidence that they ran a wash house in the backyard, likely laundering and handling clothes for white legislators at the nearby Mississippi Capitol.

Harrison hopes to raise enough money to restore the homes to preserve the women's history in a rare tribute to self-empowerment following slavery and preceding the civil-rights era.

"Sometimes the image that they give of us after slavery is that they were running around and begging and stuff," Harrison told the Jackson Free Press. "But, these people were entrepreneurial. We don't tell that story at all-—it's just like out of slavery into civil rights. Harrison researches the legacy of midwives in Jackson and throughout the state. Midwives like Ford were literally responsible for the successful births that make up an entire generation of African Americans that racism kept away from formal health care.

A midwife named Hattie Simon brought Harrison herself into this world, but she did not learn much about the practice growing up. Harrison says that being called a "Black African" as a child by school-aged children who did not know any better sparked her lifetime pursuit to find out all there is to know about African American culture as a way to learn about herself.

On a crisp Friday at the Smith Robertson Museum and Cultural Center that she helped found on the site of Jackson's first school for black children, Harrison spoke to a group of women from greater Hinds County. The women had forged a bond rooted in their relationship to midwifery. Some had mothers or grandmothers who worked in the profession decades ago, and almost all of them had come into the world at the hands of a midwife.

Dollie Gathings entered that room with poster-sized photos of her grandmother, Frankie Owens-Brown, who was a practicing midwife until six months before she died in 1960 at age 78. Gathings is into genealogy and has traced midwifery in particular. She said her grandmother never turned people down for midwifery services because they could not pay—rather "it was just one of those things she loved doing, she did it for the community."

Midwifery transcended race lines even during slavery. Gathings' grandmother was trained by the midwife who delivered her 10 children—one of whom is still living at the age of 105, Eula V. Polk.

Polk recalled not being able to touch any of the midwifery stuff her mother brought to and from people's houses. Polk's niece, Gathings, hopes that young people with no tangible experience with the practice that became outdated in the 1950s and '60s understand its significance.

"I think it was almost like a spiritual thing," Gathings said of midwifery. "Doing the work of God, helping these women to get these children into the world."

CORRECTION: A previous version of the story said, "Midwives like Scott were literally responsible for the successful births that make up an entire generation of African Americans that racism kept away from formal health care." Virginia Ford was a midwife, not her mother, Mary Green Scott. We apologize for this error.