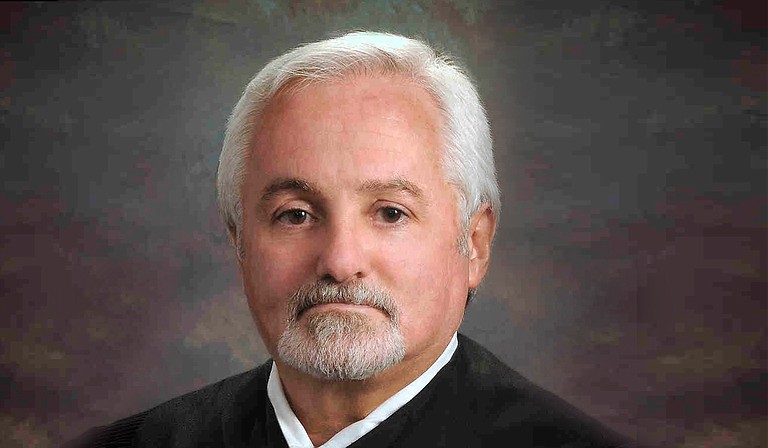 Malia* and her friend were driving in Pearl one day in August last year, out looking for jobs. Malia, who is in her 20s, was in the passenger seat, and her 4-month-old baby rode in a car seat in the back. Suddenly, a Pearl police officer pulled the vehicle over for a traffic violation involving using a phone while driving. The officer ran Malia and her friend's names and found they both had outstanding warrants for routine misdemeanor offenses, meaning that Malia had not paid Pearl Municipal Court fines she owed. The officer arrested both women and called the Mississippi Department of Human Services to report that the baby was "abandoned" after her mother's arrest. Even though the baby's grandmother, Malia's mother, showed up to take the baby, the officer took the child before Judge John Shirley, who presided over Pearl Municipal Youth Court.

Youth-court judges in Mississippi preside over all matters involving delinquent juveniles in addition to abused, neglected or abandoned children. Youth-court judges have the power to send children to foster care, grant custody to different guardians or give a child to adoptive parents.

Judge John Shirley gave custody of the baby to the grandmother immediately. Shirley, who also presided over Pearl Municipal Court, demanded $500 from Malia of her outstanding court fees, which totaled more than $1,000. Neither Malia nor her mother could afford that fee, so Malia spent seven nights in jail, MacArthur Justice Center attorney Cliff Johnson told the Jackson Free Press. He also said the Pearl Municipal Court could not produce files on Malia's earlier misdemeanors. After a week, Malia's mother got $300 together to help get her out of jail. It was around this time that Judge Shirley issued an order preventing Malia from seeing her child.

Youth-court judges conduct hearings within 14 days after the initial hearing and consider several factors including the child's physical and mental conditions and the parent's ability to provide supervision. Following the hearing, Malia believed that she could not see her child because the judge had granted her mother custody of the baby, Johnson said. Malia still owed fees in Shirley's municipal court, and she did not return to youth court to attempt to get custody of her child back. Mississippi law did not mandate that Malia be provided an attorney to represent her.

The above account is based on a press release attorney Johnson prepared and subsequent interviews with him. Youth-court documents detailing the situation are bound by strict state confidentiality rules and not public record. 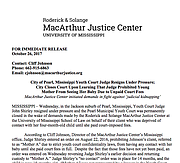 More than a year later, Malia heard about the MacArthur Justice Center and called Johnson in October. He investigated her case and alerted the Pearl Board of Aldermen and Mayor Jake Windham about Malia's case, and Judge Shirley reversed his order on Tuesday, Oct. 24, despite Malia still not paying her court fines. The mother could finally see her now 18-month-old baby after more than a year of court-ordered separation.

Late on Wednesday, Oct. 25, the Pearl Board of Aldermen and the mayor met for an emergency-called meeting. The aldermen decided to shut down the youth court, and Shirley resigned his post as both the Pearl Municipal Youth Court and Justice Court judge. Shirley, who also serves as a justice-court judge in Rankin County, claims some information Johnson wrote in his press release is untrue.

Judge Shirley claims the mother did not come back to youth court and that he did not know she was indigent. After news of his resignation broke, he sent a statement to WLBT placing the responsibility on the teenage mother.

"The child's mother complained in a press release that her contact with a child was prohibited because she was indigent, but she refused to appear in court at the next hearing and never informed me about financial issues," Shirley said in the statement published by WLBT. "I have always been very understanding about financial issues if I have been informed by someone in court, but a judge can't properly assess a financial situation unless informed. The remedy was for the mother to appear in court and she did NOT (emphasis his)."

Shirley wrote that youth-court judges are authorized to order "no contact" between a child and the child's parent "if the judge is concerned that the child would not be safe because the parent is refusing to take corrective action to prevent future abuse or neglect. One indicator of a parent refusing to take corrective action is when the parent refuses to come to court."

Johnson says that if Shirley believed Malia to be a neglectful and abusive mother, he gave no reason for why she should suddenly get custody of her baby back days before the City of Pearl shuttered its youth court. Johnson told the Jackson Free Press that his client has two more children who continued to live with this past year. He could not see the youth-court documents either because the court did not appoint him to represent Malia, Johnson said.

Malia did not return to youth court after the hearing last August, but Johnson says his client's story of being locked up for unpaid fees and then being fearful to return to court is common. The MacArthur Justice Center has spearheaded litigation, most recently in Scott County, Miss., to change the judicial practice of locking people up for their inability to pay fines. Johnson said if a person is intimidated or frightened to go back to court, they usually will not.

"I resigned because I am tired of the politics of Mayor Jake Windham and Rankin County Youth Court Judge Tom Broome," Shirley's statement says.

Broome told the Jackson Free Press he did not want to dignify the statement with a comment, saying "I will let my record and that of our court speak for itself."

Mayor Windham said he and the board acted on objective facts presented to them. "This had no political gerrymandering going on," he told the Jackson Free Press. The mayor said he felt that he made the correct decision for the city and was taken aback by Shirley's statement.

The former youth-court judge defends his time on the bench in Pearl, saying his coordination with law-enforcement officers and his persistent pushing on Child Protective Services workers resulted in "many criminal child predators (that have) been prosecuted and convicted."

Johnson calls the act of linking child contact to inability to pay court fees "judicial kidnapping." He said he got "dozens and dozens" of calls after releasing his statement on Oct. 26, which indicated to him that not being able to see children due to outstanding fees was common in Pearl.

Youth-court proceedings are entirely closed off to the public, and all records are confidential in Mississippi. Youth-court judges are in charge of determining if a parent has neglected or abused a child or children. These judges determine whether removing a child from the home is necessary and if so, whether to place them in foster care or in the custody of another parent or guardian. While youth-court judges are supposed to follow uniform rules of procedure, their actions tend to be inconsistent from jurisdiction to jurisdiction.

Carlyn Hicks, director of the Mission First Legal Aid office, said Mississippi is in need of a uniform county youth-court system. Parents around the state, she said, need to expect the same level of engagement from the Division of Child Protection Services, youth courts and law enforcement.

"Until we see that in a unified front, we are going to continue to have problems; we are still going to have issues," Hicks told the Jackson Free Press. "... [T]he most important thing would be the uniformity in how the youth court operates."

Judge Tom Broome, the youth-court judge of Rankin County Youth Court, now has jurisdiction over all of Shirley's cases. He said his staff is working as quickly as possible to take inventory of all the Pearl Youth Court cases, prioritizing out-of-home placement cases.

"We always try to make sure that the children are in a safe spot, but also recognize the importance of children growing up in their own home with their parents, and parents being able to raise their own children," he told the Jackson Free Press.

Broome, a board member of the National Council of Juvenile and Family Court Judges, urged people with cases in Pearl Youth Court who have questions or issues to get in touch with him and his staff at [email protected] or by calling 601-824-2545.

*Name created because Johnson would not provide Malia's real name.