The Fight to Make Taxis Equal 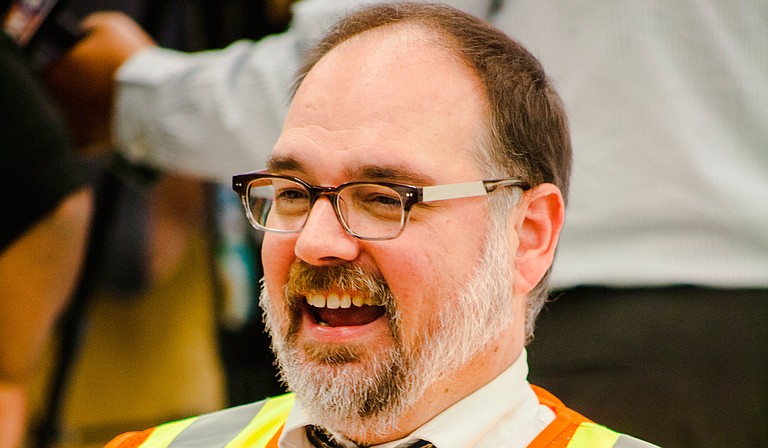 Scott Crawford, a disability advocate in Jackson, said it is a civil-rights violation for taxis to not provide equal services. He is pictured here at a press conference for JPD. Photo by Stephen WIlson

JACKSON — As a wheelchair user, Scott Crawford is tired of not being able to take a cab in Jackson—especially since legally he should be able to.

"Over 27 years taxi companies have evaded the ADA (American Disability Act), and it's just not OK anymore," Crawford told the Jackson Free Press.

"People with disabilities need transportation like everyone else—it is mandatory to being a productive citizen to being engaged and involved."

Disability rights advocates have pushed for changes for two years, Crawford said. He and other of the City's ADA Advisory Council members want taxi companies to have a mandatory minimum number of wheelchair-accessible vehicles in their fleet.

As a member of the council, Crawford met with City of Jackson attorneys and the planning committee's chairman, Ward 3 Councilman Kenneth Stokes, about six weeks ago. He said they assured him that they would have a resolution by the end of October that would include taxi companies' and the disabled communities' needs.

While their demands seem different on the surface, taxi companies and the disability advocates are essentially asking the same thing: for the City to enforce laws that protect them and allow them fair access. For Tyra Dean, owner of Deluxe Cab, that change would come through a City crackdown on unregistered taxis.

"There's so many undocumented as well as illegal cab companies that are unrestricted and operating in the city with no rules," Dean said. She would like to have more flexibility with rates. At present time, her company does not have any wheelchair-accessible vehicles, but she said they are "in the process of working on them," and learning more about what the ADA requires.

With taxis bound by City ordinance that keeps them from adjusting their fares, thus making them less competitive with transportation-network services, some argue that taxi companies might not be able to purchase or create wheelchair-accessible vehicles.

"We could on one end just say, 'well let's just make all vehicles ADA-accessible,'" Ward 2 Councilman De'Keither Stamps said at a planning committee meeting on Oct. 31. "Then taxicab businesses are going to have to find another business to get into ... and then people won't have taxis at all."

City ordinance states that no driver can refuse to accept a passenger in a member of any protected class, including the disabled community. It also says vehicles need to comply with the ADA, which mandates "full and equal" access to transportation services. Lee Cole, chairwoman of the City's ADA Advisory Council, said she only knows of one taxi company for sure in Jackson, Veterans Cab, that operates with a handicap-accessible vehicle, and maybe one other. Cole wants to see explicit mandatory minimums for wheelchair-accessible vehicles for taxi companies written into the city code.

Otherwise, customers in a wheelchair must resort to the JATRAN bus service, which has limited operating hours and does not go beyond city limits or to the airport. Transportation network services, such as Uber and Lyft, say they do not have to provide handicap-accessible vehicles in compliance with the ADA because they do not offer a service classified as "public accommodations."

These companies are no longer City-regulated after the Legislature turned them into State-regulated agencies in 2016.

At the Oct. 31 meeting, the committee reviewed the entire taxi ordinance as it stands as well as proposed changes including drivers' fees and fare flexibility, as well as the disabled communities' requests for every company to be required to supply wheelchair-accessible cars equally. If the council does not change the ordinance after legal review, Crawford says he is not opposed to taking legal action himself.

"One could sue a taxi company for non-compliance with the demand-response service requirements," he said. "And believe me, that is under consideration."

"I know I'm speaking for everybody in the disability community. We don't like to sue people. We prefer to educate and persuade, but it's getting to the point now where something's got to give," Crawford said. He added that fairness is the cost of doing business with the public.

"Would it be OK if they decided not to provide service to people of a certain ethnicity? That would not be OK.