OPINION: Domestic Violence is the Problem 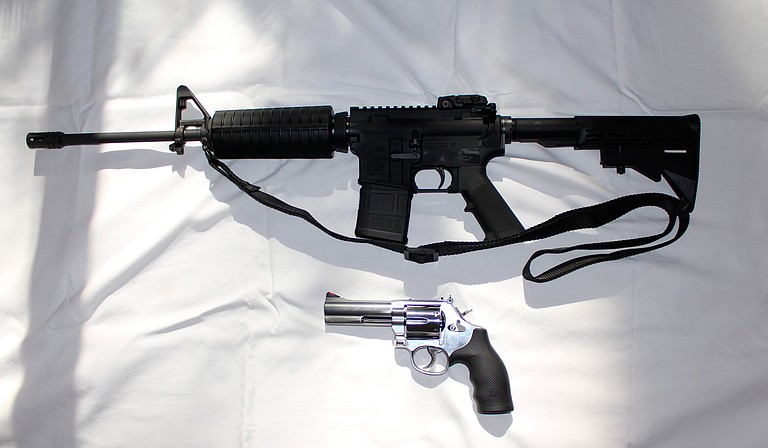 In the coming weeks, we will continue to hear about how domestic violence should have been a warning sign in Texas. People are going to debate how and why the shooter was allowed to purchase guns.  But domestic violence wasn't the warning sign—it's the problem. Photo courtesy Flickr/Kitcase

My ex-husband is fond of saying, "I never owned a gun when I was with Laurie because I knew if I did, she might kill me."

I was 16 years old and 5 months pregnant when I married my high-school sweetheart. Even though we were young, our relationship seemed so perfect to so many people. He doted on me. He was so sweet and kind. We were together all the time, and I do mean all the time. We went everywhere together. People thought it was adorable, loyal and dutiful.

What people didn't see was I couldn't go anywhere alone unless he approved. It wasn't cute. It was control and abuse. I don't even remember how it started, probably something I wore, but I remember he had a way of beating me so all my bruises would be hidden, just body blows. It's more likely that if we had a gun in our house, I could have died, but there were so many nights when I would have blown him away to escape.

I could recount to you all the times my ex-husband beat me, but that would take a whole issue of the paper. Just know there were many years of bruises, and even a fractured eye socket when he punched me in the face while I was holding one of our newborn twins. When I had enough, I made a plan, and I left. The person who helped me do that was my mother. My ex had plenty of rage for her, too, but thankfully, it was never violent rage.

When I left my marriage, I spent many nights worried about the safety of my family. I hoped and prayed my ex would let go and move on. At the very least, I hoped he wouldn't be too violent. I hoped he would stick to watching my house.

He used to tell me that if I ever left him, he would blow up my house while I slept. My way to deal and feel safe was having a very public affair with a police detective. Thankfully, my ex moved on, and so did I. He now has a small arsenal of guns.

When I heard about the mass shooting in Texas, and we learned that it wasn't racially motivated, I immediately thought, "Oh no, another one." Another angry man has killed people because he's a domestic abuser and wants control. I figured another ex-girlfriend, wife, baby mama, mother or family of said person was his target. People keep saying, "It shouldn't have happened here."

I struggle to define where "here" is. Is here a small rural town and a white church? Is it because he gunned down kids? I ponder these things because, aside from the scale of the event, this shooter didn't do anything new. Kids have been killed in churches before. Domestic abusers all over the country gun down family members they blame for their problems every day. They take children and bystanders with them. All of the people involved are undeserving of death.   Labeling them as "innocent" is unneeded unless we secretly think women who leave their abusers somehow deserve to be gunned down in cold blood in their living rooms while holding their kids, in their churches, at stop lights, at schools and at workplaces.   Some of us seem to think that. Every time there's a tragedy like this, here come the people who either flat out say or insinuate, "Why didn't the person just shoot the woman he was mad at?" As if it would be better to just kill the woman who offended him. It's already happening in this case.

"There are many ways that he could have taken care of the mother-in-law without coming with 15 magazines and a loaded assault rifle to a church," Texas Department of Public Safety Regional Director Freeman Martin said at a news conference, as the Los Angeles Times reported.

Just killing one target isn't the issue; the need for people not to kill people because they can't have their way is.

In the coming weeks, we will continue to hear about how domestic violence should have been a warning sign. People are going to debate how and why the shooter was allowed to purchase guns.   But domestic violence wasn't the warning sign—it's the problem. It's the core problem of many gun deaths. The deep concern for safety shouldn't only come after an abuser has gunned down multiple people. We should be outraged from the first punch.

Laurie Bertram Roberts is a reproductive-justice activist, full-spectrum doula and writer based in Jackson. This column does not necessarily reflect the views of the JFP.