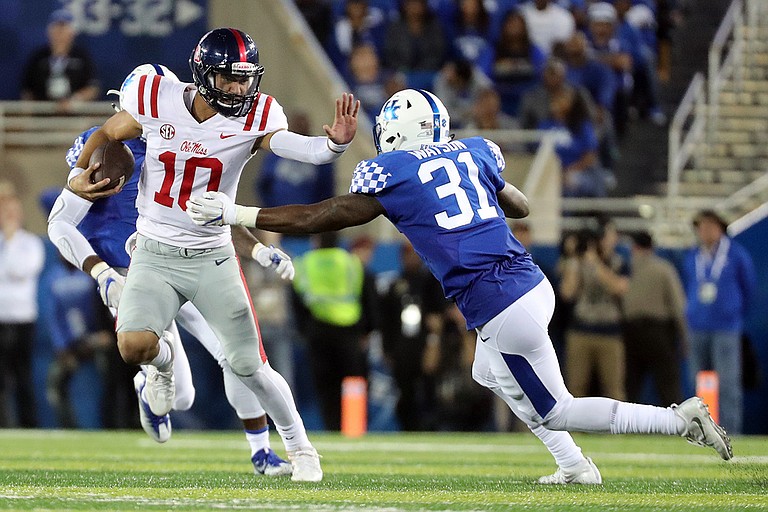 LEXINGTON, Ky. (AP) — With seconds ticking off and just inches to work with in the left corner of the end zone, Mississippi quarterback Jordan Ta'amu put the football just where D.K. Metcalf had to be.

The lanky receiver jumped over Kentucky cornerback Lonnie Johnson for the game-winning touchdown catch, making sure his feet stayed inbounds as he came down in the very tight space.

"Jordan put it on the money," Metcalf said of the 7-yard TD with 5 seconds remaining, upheld on review, that pushed Mississippi past Kentucky for a wild 37-34 victory on Saturday. "It was just up to me to turn around and make the play."

Metcalf, Ta'amu and the Rebels converted clutch plays throughout a back-and-forth game that was best symbolized in the final minutes. Ole Miss (4-5, 2-4 Southeastern Conference) used the final 2:14 well, driving 71 yards in 14 plays and getting a fumble call overturned on a critical replay review that maintained possession and set up the game-winning score three plays later.

Officials initially ruled that Ta'amu had fumbled the ball away to Kentucky as he came down on a keeper for first down inside the 10. The review determined that Ta'amu was down before the ball came out, giving the Rebels a reprieve that the junior QB took advantage of.

"I knew that my elbow was on the ground or some part of my body was on the ground, so I wasn't really worried," Ta'amu said of the wait during replay. "I was just worried about the next play."

After a first-down spike and an incompletion, Ta'amu found Metcalf with the TD to spark a huge celebration for the Rebels. Coming a week after Ole Miss lost 38-37 to Arkansas in the final seconds , players needed this lift and got it from many phases.

On the brink of losing control with a 27-17 deficit early in the third quarter, Ole Miss stopped Kentucky (6-3, 3-3) on four straight possessions despite the ejection of defensive end Breeland Speaks for targeting. The Rebels rallied with 13 unanswered points for a 30-27 lead before Kentucky went ahead 34-30 on Benny Snell's 1-yard TD run.

Ta'amu took over and calmly led the Rebels downfield en route to finishing with Ole Miss career highs of 382 yards and four TDs — including two to Metcalf, who had 83 yards on five catches.

The Rebels outgained Kentucky 473-455 and overcame three rushing TDs by Snell, who had 176 yards on 28 carries.

"Obviously, a very devastating loss," Kentucky coach Mark Stoops said. "You know, the bottom line is we didn't make enough plays in critical moments. They did.

"I was proud of our offense taking it down and putting it in the end zone there. We came up fractions off, and it's a difficult loss."

Mississippi: The Rebels had momentum before Kentucky appeared to snatch it away. But they had enough clock to work with and succeeded behind the SEC's No. 1 passing offense that didn't miss a beat with Ta'amu. A week after throwing for 368 yards in his first start, Ta'amu often had time to throw to receivers who always seemed to be open. He completed 31 of 40 passes and his 58-yard TD to Metcalf in stride was almost his best throw before the game winner.

Kentucky: This Wildcats loss might have hurt even more than the late collapse against Florida because the Wildcats appeared to seize a second straight game late. But the SEC's worst pass defense struggled to keep Rebel receivers in check, giving just enough space that allowed Ta'amu to pick them apart. With it went the chance to stay within reach of No. 2 Georgia, which clinched the East Division with the loss. Quarterback Stephen Johnson was 19 of 24 passing for 204 yards and combined for 60 yards rushing and receiving.

Kentucky visits Vanderbilt on Nov. 11, seeking its first win in Nashville since 2009.

Mississippi hosts Louisiana on Nov. 11, aiming to go 5-0 against the Ragin' Cajuns.