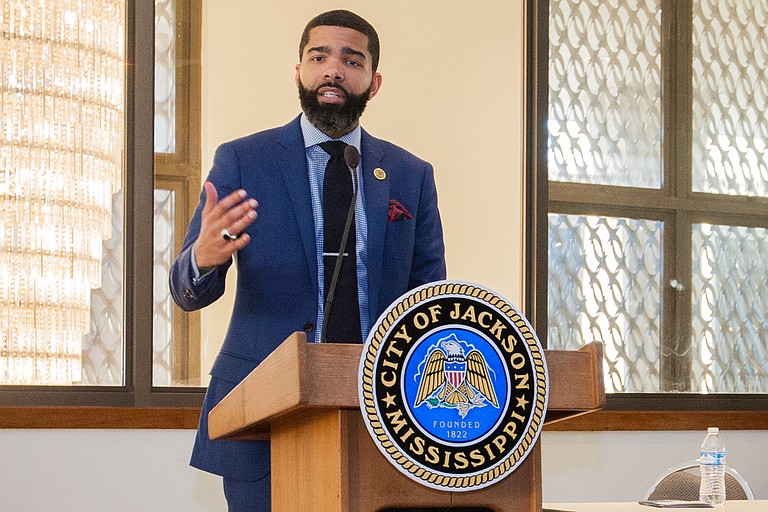 Mayor Lumumba mentioned several initiatives, from a movie theater to a blight elimination program that rely on outside funding. While these ideas are exciting, they are difficult for journalists to cover accurately for Jacksonians. Photo by Stephen Wilson

Mayor Choke Antar Lumumba ran an ambitious mayoral campaign this year and clearly excited the people of Jackson, demolishing all contenders for a run-off race. We were excited, too, and endorsed Lumumba, putting faith into his agenda centered on broad campaign promises like "creating jobs" and "improving our educational system," as well as putting people at the center. We're for it.

So far, the mayor delivered on one campaign promise in an unexpected and dramatic way that plays to his negotiation skills: successfully crossing party lines to avoid a state takeover of Jackson Public Schools and maintain local control of the school district. Hundreds of Jacksonians at his State of the City address Monday cheered loudest when he discussed the new coalition to help improve the second-largest school district in the state.

We applaud the coordination and collaboration with a traditionally hostile-to-Jackson governor's office in working toward a solution for JPS. We hope to see the Mississippi Department of Education come alongside the other coalition members to address the deep root causes of "failing" schools, which include poverty, trauma and blight.

While the new administration's leadership on JPS has been noteworthy, communication on other changes in the city has been slow to take root. Lumumba mentioned several initiatives, from a movie theater to a blight elimination program that rely on outside funding. While these ideas are exciting, they are difficult for journalists to cover accurately for Jacksonians. If the mayor wants to discuss pending grants publicly, city officials should be prepared to update the public regularly about the grant process, its current stage and likelihood of that funding coming through. A grant unmade is akin to a campaign promise not fulfilled. A potential movie theater for the city sounds amazing, but Jacksonians have heard wild promises before (see Farish Street).

We are excited about opportunities for development and innovative co-operatives the mayor discussed in his "State of the City" address. There is a lot of hope, including in our office, for this administration, but what we would like to see next is clear, welcoming communication to all local media, including the Jackson Free Press. We love this city, and we need clear communication about the specifics of plans or grants, that we can, in turn, relay to citizens. Involving people in democracy, through people's assemblies and participatory budgeting, is a wonderful idea, but we can't inform Jacksonians to plan for it unless we know well ahead of time.

Readers are excited, but also cautious about development like the new Fondren hotel and never-ending potholes on their streets. We don't expect all plans to be finalized or complete, but bringing people into the process as it's unfolding and giving access to local media to speak to the department heads who are in charge, as well as the mayor himself, will help tremendously. We're excited to cover the city as it continues to evolve and change—and with cooperation from the city, local media can document that change in an impactful and accurate way.