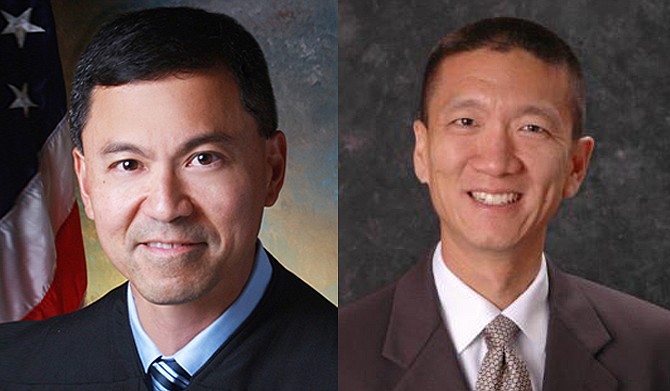 In March, U.S. District Judge Derrick Watson (left) in Honolulu blocked the new version of Trump's travel ban from taking effect, citing what he called "significant and unrebutted evidence of religious animus" in Trump's campaign statements. Hawaii Attorney General Douglas Chin (right) wrote to the 9th Circuit that "the President claims a nearly limitless power to make immigration policy that is all but immune from judicial review" and "he must be checked." Photo courtesy US Courts State of Hawaii

SEATTLE (AP) — For the second time in a week, government lawyers will try to persuade a federal appeals court to reinstate President Donald Trump's revised travel ban — and once again, they can expect plenty of questions Monday about whether it was designed to discriminate against Muslims.

A three-judge panel of the 9th U.S. Circuit Court of Appeals has scheduled arguments in Seattle over Hawaii's lawsuit challenging the travel ban, which would suspend the nation's refugee program and temporarily bar new visas for citizens of Iran, Libya, Somalia, Sudan, Syria and Yemen.

Last week, judges on the 4th Circuit Court of Appeals heard arguments over whether to affirm a Maryland judge's decision putting the ban on ice. They peppered Acting Solicitor General Jeffrey Wall with questions about whether they could consider Trump's campaign statements calling for a ban on Muslims entering the U.S., with one judge asking if there was anything other than "willful blindness" that would prevent them from doing so.

After Trump issued his initial travel ban on a Friday in late January, bringing chaos and protests to airports around the country, a Seattle judge blocked its enforcement nationwide — a decision that was unanimously upheld by a three-judge 9th Circuit panel.

The president then rewrote his executive order, rather than appeal to the U.S. Supreme Court, and in March, U.S. District Judge Derrick Watson in Honolulu blocked the new version from taking effect, citing what he called "significant and unrebutted evidence of religious animus" in Trump's campaign statements.

"Again, in this court, the President claims a nearly limitless power to make immigration policy that is all but immune from judicial review," Hawaii Attorney General Douglas Chin wrote to the 9th Circuit. "Again, he must be checked."

The administration's lawyers are seeking to persuade the judges that the lower court's decision is "fundamentally wrong," and that the president's order falls squarely within his duty to secure the nation's borders. The order as written is silent on religion, and neither Hawaii nor its co-plaintiff, the imam of the Muslim Association of Hawaii, has standing to sue, they say — arguments that were rejected in the lower court.

The travel ban cases are expected to reach the Supreme Court, but that would likely be cemented if the 4th and 9th Circuits reach differing conclusions about its legality. Because of how the courts chose to proceed, a full slate of 13 judges heard the 4th Circuit arguments last week, while just three, all appointees of President Bill Clinton, will sit in Seattle.

For that reason — with the possibility for myriad concurring or dissenting opinions — it could take the 4th Circuit longer to rule, noted Carl Tobias, a law professor at University of Richmond law school in Virginia.