Murder and ‘The Golden Girls’ 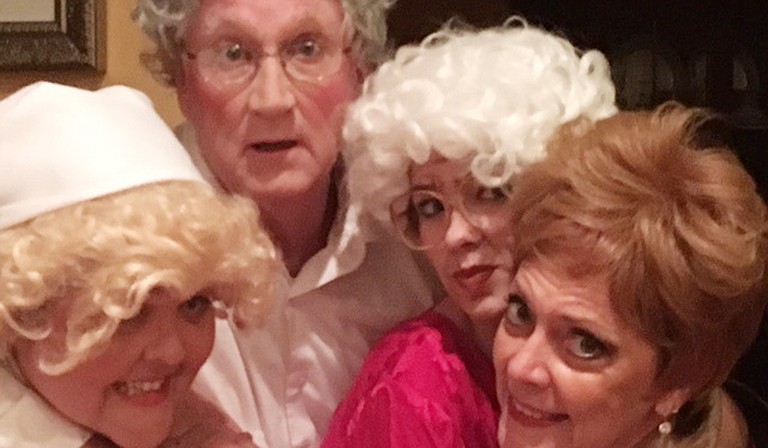 Mississippi Murder Mysteries’ production, “Murder is Golden,” is a parody of “The Golden Girls,” but with a plot twist. Photo courtesy Fringe Dinner Theatre

With the Mississippi Murder Mysteries' production of "Murder is Golden," the acting company brings together two concepts that one would not expect to hear in the same sentence: murder mystery dinner theater and "The Golden Girls."

"Murder is Golden" is a parody of "The Golden Girls" while still being a tribute to the well-loved television show. In the play, Becky Martin, who plays Blanche; Jessica Wright, who plays Rose; Tommy Kobeck, who plays Dorothy; and Sam Gregory, who plays Sophia, have to investigate an actual murder that happens during a murder-mystery party that Blanche throws.

For Becky Martin, who also wrote the script, it was the show's ubiquitous nature that helped inspire the production.

"'Golden Girls' is just about on every channel, late at night, early in the morning, and I thought, 'Wouldn't it be fun if these ladies solved a murder mystery together?'" she says.

"We've had other theater groups spin off of ours," Martin says. "I guess when you've been along as we have, people are like, 'Well, we can do this, too.' But we're the original, and we are so proud to still be around and still be working together."

At a murder-mystery dinner theater, people are assigned a table and are usually paired up with people they do not know. It's up to the table to solve the murder mystery. Martin says the dinner-theater experience is friendly to first-timers, though sometimes there are unexpected results.

"It's really funny because we've been mistaken for the waitstaff before," Martin says. "We'll be in the middle of a line, and somebody will say, 'Uh honey, can you get me a glass of water?'"

Aside from the food, dinner theater provides a different spin on traditional theater as the performers act within the audience. Occasionally, audience members are pre-selected before the show to deliver a line or act as part of the show.

"I think people are more immersed when they actually attend a dinner theater because of the fact that we're actually out in the audience, and they have an opportunity to play along whether it's a small line or role that they perform or just working as a team at the end of the play to solve the murder mystery," she says.

"We are not going to kill off a Golden Girl," she says. "That would be sacrilegious; that wouldn't happen."