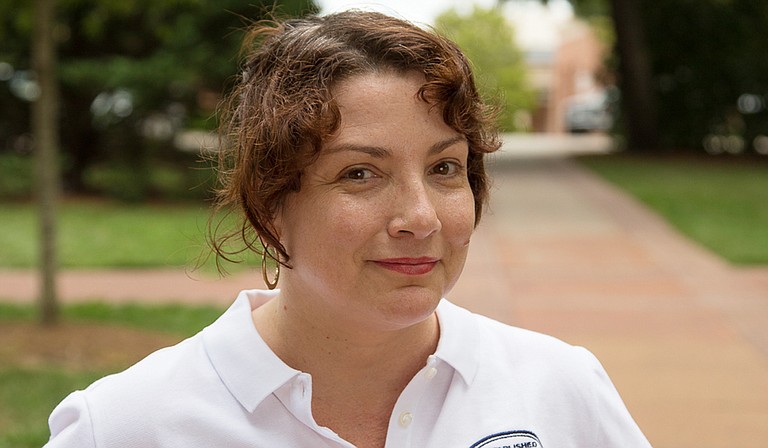 In May 2016 when professor Theresa Starkey and 400 to 600 Oxford Pride Weekend marchers turned the corner on University Avenue and South Lamar Boulevard in Oxford, Miss., she says that she could not believe her eyes.

"We saw all of these people overflowing on balconies, on the sidewalks; people popped out of Proud Larry's playing 'When the Saints Go Marching In,' and it was such a surreal moment because there was just so much support, community spirit and love," Starkey says. "It was one of the best community moments I've ever experienced. You had parents running out into the parade from the sidewalks to hug their children and people dropping pride flags down from the windows."

Starkey, who is the associate director of the University of Mississippi's Sarah Isom Center for Women and Gender Studies and the university's core gender-studies instructor, was one of the main organizers for the inaugural Oxford Pride Weekend in 2016. This year, she is continuing in her role for the event.

"We've been fortunate enough to have some really talented students find us when it comes to doing programming," Starkey says of how the event first came about. "A student wanted to do a parade so (the Sarah Isom Center) helped logistically manage it and put it together. One student came onboard, then other student groups like Pride Network, and then people in the community, and it sort of evolved out of that."

She and the Isom Center have played a large part in getting the weekend off the ground, doing tasks such as coordinating the parade route and managing the website. The center provides the base and helps other parties put the building blocks in place, she says.

The Oxford Pride organizers also works with different community partners, including The Lyric, Proud Larry's and the Oxford Film Festival. This year, new groups have come onboard, such as and the UM School of Social Work and Midsouth Pride from Memphis, Tenn, with more still joining.

On May 2, Starkey says the center also partnered with Saint Leo, which is a restaurant in the Oxford Square that local businesswoman Emily Blunt runs, to host a benefit dinner that functioned as a lead-in to Pride called "Mississippi, Your Food Is So Queer." Senatobia-native and James Beard-nominated chef Sydney Meers, who now resides in Virginia, came to Oxford to cook the four-course meal completely pro-bono.

Starkey says that if anything has surprised her since her involvement with Oxford Pride, it is the generosity that people like Meers and Blunt have displayed.

"It overwhelmed us, in a way, and surpassed our expectations," she says.

Starkey says that their goal for this year's event is lead the way to a third installment, and for that to be even bigger than the first two, "and that (Pride Week) becomes something that Oxford is known for, and that it can be part of the tapestry of Mississippi and continue to be a celebration."

Oxford Pride Weekend begins with Code Pink's "Make America Gay Again!" Dance Night at 11 p.m., Thursday, May 4, Proud Larry's (211 S. Lamar Blvd., Oxford). The doors open at 9:30 p.m. Other events include a Big Freedia performance at 9 p.m., Friday, May 5, at The Lyric (1006 Van Buren Ave., Oxford); the pride parade at 2 p.m., Saturday, May 6; and the "Go Diva Extravaganza," which features performers from the Pulse Nightclub in Orlando, at 8:30 p.m. on Saturday evening. For the full lineup, visit oxfordpride.rocks.