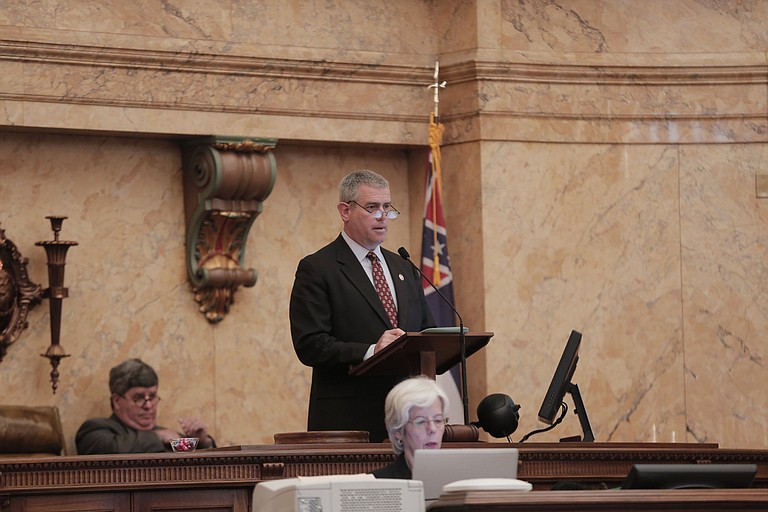 Mississippi House Speaker Philip Gunn says he will appoint a committee to study the pros and cons of creating a state lottery. Photo by Imani Khayyam.

JACKSON, Miss. (AP) — Mississippi House Speaker Philip Gunn says he will appoint a committee to study the pros and cons of creating a state lottery.

The Republican from Clinton is a leader in his Baptist church and has long opposed the expansion of gambling in Mississippi, including a lottery. But on Thursday, Gunn told reporters that he wants to see numbers evaluating how a lottery could affect Mississippi's economy.

"I'm open to looking at it. I do not think it's going to be the golden egg that everybody thinks that it is," Gunn said during a news conference a day after the 2017 legislative session ended.

Mississippi is one of six states without a lottery, according to the National Conference of State Legislatures. Several proposals to create one in Mississippi have died the past two decades, usually with little or no debate.

Republican Gov. Phil Bryant asked lawmakers this year to consider a lottery as a way to generate revenue because state tax collections have been lagging. He said Mississippi is losing money because residents are driving to other states to buy lottery tickets.

Republican Rep. Mark Baker of Brandon put a lottery amendment into a bill that originally dealt with mental competency in criminal cases. However, House rules prohibit members from making drastic changes from a bill's original purpose, and the bill died in February when it wasn't brought up for debate in the full House.

Lottery attempts failed in two other House bills. In one case, Gunn ruled that an amendment could not be added because it would have changed the scope of the bill. In the other bill, Gunn said a lottery amendment was relevant and could be allowed, but the House defeated it.

Gunn said he'll ask House Gaming Committee Chairman Richard Bennett, a Republican from Long Beach, to lead the lottery study. Gunn wants the group to examine how much it would cost to set up a lottery, how much the state could reasonably expect to collect from ticket sales and how a lottery might affect sales tax revenue.

"If a person takes $10 and goes and buys lottery tickets, versus buying milk and bread — well, that's 70 cents of sales tax we've lost on that $10," Gunn said. "So, it's not just a quick, clean collection of dollars. There are costs that have to be backed out."