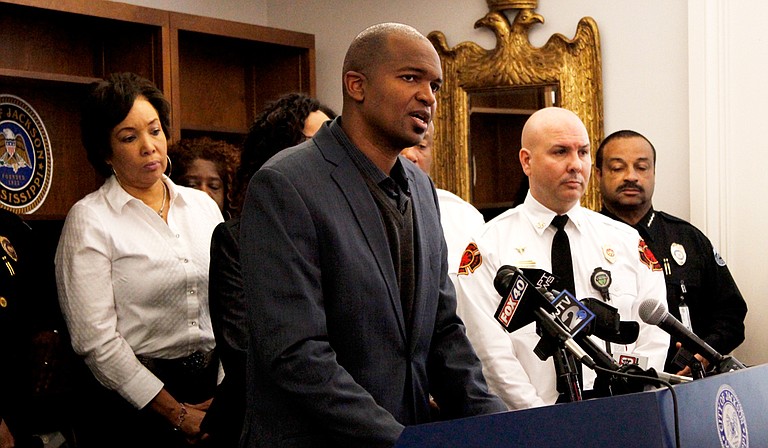 Director of Public Works Jerriot Smash said Jacksonians can expect a water outage or low water pressure for most of the weekend from 3 p.m. on March 10 through 3 p.m. on March 12; to stay up to date, Jacksonians should subscribe to the Code Red emergency alert system. Photo by Arielle Dreher.

JACKSON — Jacksonians in some parts of the city can expect water outages or low water pressure this weekend, starting on Friday at 3 p.m. until about the same time on Sunday, March 12. The outage is due to three breaks in one of the city's main water lines, Director of Public Works Jerriot Smash told reporters this morning.

"Basically, if you experienced any issues on Feb. 10 when we conducted the last outage, we expect that you will more than likely see issues this time as well," Smash said. "Those issues will be no water and then possibly low pressure, so once system pressure is restored and the system is back on, there will be a boil-water notice for the affected areas." 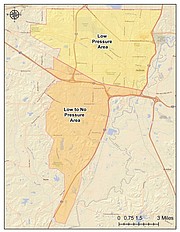 The construction is expected to begin Friday at 3 p.m. and continue through the weekend until Sunday at 3 p.m. During that time, Jacksonians living south of Northside Drive over to Interstate 55 to Interstate 220 on the northern boundary all the way down to Byram could be affected. The outage will mainly affect the southern parts of Jackson below Highway 80. The Forest Hill area of south Jackson is on its own well system and will likely not be affected.

Deputy Fire Chief Brandon Falcon said there will be three water distribution stations throughout the city: Precinct One at Cooper Road, Precinct Two at the Metrocenter and Precinct Three on the West Street side of Memorial Stadium. Jacksonians will be able to give their name and information at these stations and pick up one case of water per person on Friday from noon until 6 p.m. and on Saturday from 8 a.m. until water runs out.

Falcon said citizens should subscribe to the city's Code Red alert system to stay up to date on the outages and boil-water notices in preparation for the upcoming weekend. Vulnerable adults, including the disabled and aging populations, have access to water as well, and if citizens have a family member that cannot pick up water, a drop-off option is available. For more information on water drop-off, call 601-960-0335. Other Jacksonians can prepare for the outage by stocking up on water now, Falcon said.

"Stockpile water by either going to the store and buying your own bottled water ... filling up your own bathtub if you need to get water to flush your commode ... any way you can conserve bulk water in the hygiene aspects of it," Falcon said at a press conference.

The 48-inch transmission water line set to be repaired this weekend has three leaks. The main leak is at Forest Avenue, with another one to the north and one to the south on the same line. The City hired two contractors to fix the leaks, Smash said, in order to minimize the impact on the residents. Falcon said Mississippi Emergency Management Agency estimates the outage will affect approximately 40,000 customers. 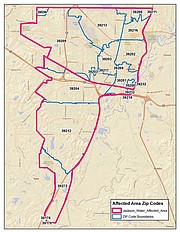 Zip code map of areas that may be affected by March 10-12, 2017 water outage. (Courtesy Hinds County Department of Emergency Management.)

The city has experienced about a 40-percent water loss on average since 2011, Smash said this morning. The City issued two emergency contracts to complete the repairs in a timely manner, but Smash did not disclose the amounts of those contracts at the press conference today.

"We'll kind of talk through that once we've got everything taken care of because what we do have is changes from what has occurred, so I really don't want to put that number out there 'til we get everything quantified," Smash said. That will be shortly after the repair is completed, he added.

Jacksonians can volunteer to work at water stations or donate water, call the City's Human Cultural Services office at 601-960-0383.