Learning From a Curious Monkey 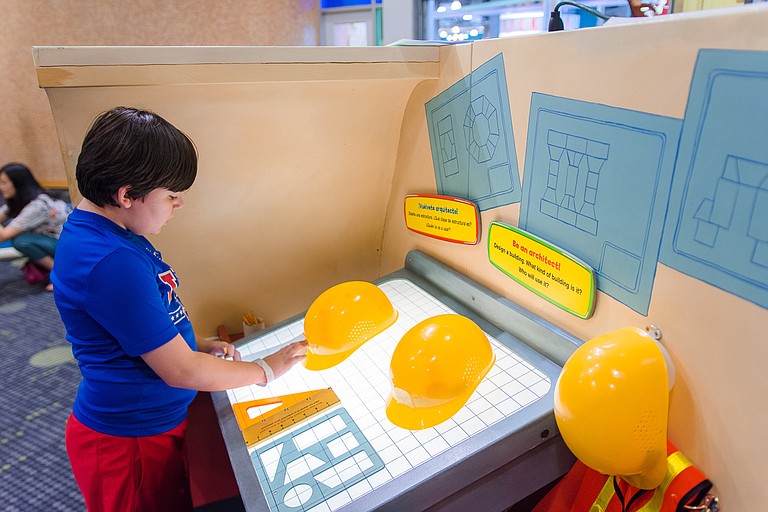 In the special exhibit room at the Mississippi Children's Museum, which currently houses the "Curious George: Let's Get Curious" visiting exhibit, the sound of children playing fills the space. Some are golfing on a tiny strip; some are playing at a sidewalk produce stand; and some are making windsocks turn on a farm.

While the kids are having fun when playing in the exhibit, "Curious George," as all of the exhibits at the museum, serves a secondary purpose: It's a learning tool for science, technology, engineering, math and art fields, collectively known as STEAM. The mini-golf area teaches the kids about physics and engineering; the produce stand increases their knowledge about math; the farm teaches the kids about wind power, taking care of animals and more; and a replica of Curious George's apartment building teaches them about color and light.

"Children are immersed in science and technology in every single day," says Assistant Director of Exhibits Samantha King. "They're teaching it in the schools. We want to be able to have it at the museum as well so (kids) can further their education and learning, and so families can have that opportunity to give to the children because we are in the 21st century, and we're continuing to change and grow. We want to give all of our children and families and opportunity to grow through mathematics and engineering and science and ... just sort of enhance their skillset."

The books tell the story of Curious George, a monkey from Africa who lives with The Man in The Yellow Hat in a big city.

The "Curious George" exhibit, which has also been to museums in places such as Greensboro, N.C., and Baltimore, opened at the Mississippi Children's Museum on May 20.

Director of Marketing Mary Alex Thigpen says that her favorite part of the exhibit is the retrospective of "Curious George."

"That's sometimes a part that may be overlooked by young children because there aren't as many interactives, but as adults and parents, I think that provides really interesting outlook and lens to the exhibit," she says.

H.A. Rey and his wife, Margret, were Jews who fled Paris just a few hours before the city fell to the Nazis on June 14, 1940.

"They basically took the manuscript for 'Curious George,' put it in the back of their bicycle and rode across Europe, fleeing the Nazis with that (manuscript) in their bike," she says.

The Reys' journey took them from Paris to Bayonne, France, to Lisbon, Portugal, to Brazil and then New York, and the entire time, they kept the first "Curious George" manuscript.

"I thought that was a really compelling story now that we're celebrating the 75th anniversary," Thigpen says.

King says that that's where the significance of the blue bicycle in the books comes from.

"What's interesting is as you read the books, it's got a lot of (H.A. and Margret's) personal lives in (them) as well, so it's a good story," she says.

The "Curious George: Let's Get Curious" visiting exhibit will be at the Mississippi Children's Museum (2145 Museum Blvd.) until Sept. 10. The exhibit is included in the cost of admission, which is $10, and free for kids under the age of 1. Children must accompany adults. The museum is currently open Monday through Saturday from 9 a.m. to 5 p.m., and on Sunday from 1 p.m. to 6 p.m. For more information, visit mschildrensmuseum.org.