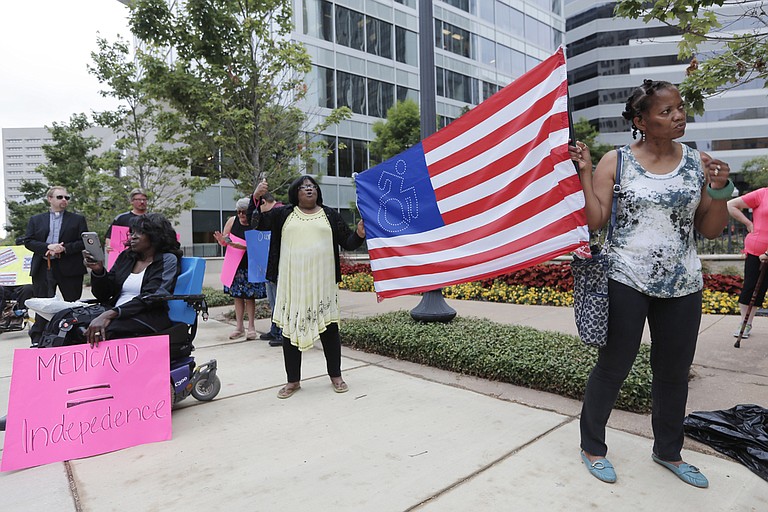 Protesters gathered in front of Sen. Thad Cochran's Jackson office, calling on the senator to vote "no" on the Senate health-care bill, which the Congressional Budget Office said would leave 22 million Americans uninsured by 2026. Photo by Imani Khayyam.

JACKSON — Melissa Cooper, seated in her wheelchair, held a pink sign this morning that read "Healthcare is a Human Right." Cooper said she had joined an early protest against the Republican plan to overhaul the Affordable Care Act because any changes to Medicaid can affect her. She is a paraplegic and an amputee, and she benefits from a Medicaid waiver program that allows her to have someone help her at home to get ready and go to work every day.

"I would be on the streets," she said, pointing out that nursing homes won't let residents come for free either.

Cooper joined dozens of protesters who gathered on Capitol Street outside U.S. Sen. Thad Cochran's local office this morning, chanting and calling on the Republican to vote "no" on the U.S. Senate's proposal to overhaul the Affordable Care Act.

"We vote; we pay taxes; we just happen to have disabilities," Cooper told the Jackson Free Press.

The Senate proposal would leave 22 millions Americans by 2026 uninsured, estimates from the Congressional Budget Office show. Additionally, the bill contains provisions allowing for flexible block grants for Medicaid funding—a measure that critics fear will lead to even more uninsured Mississippians. As of May, 760,609 Mississippians are enrolled in the state's Medicaid or Children's Health Insurance Program. Over half of the state's Medicaid recipients are children.

Augusta Smith helped organize the protests as a part of a new organization called M3, which stands for Medicaid Matters to Mississippians. Smith, the executive director of Living Independence for Everyone of Mississippi, emphasized that Medicaid is not a "hand-out" and that most of the people out protesting have jobs.

Medicaid coverage enables Mississippians to benefit from several waiver programs including: independent living, elderly/disabled and assisted living waivers, among others.

Mississippians who depend on those waivers likely could not afford costly medical care without assistance. Smith said federal Medicaid support is important in the midst of the Legislature's cuts to state agencies too.

"You want to save money, but what about lives?" she said.

Mississippi's two Republican senators have taken different approaches to the legislation. Sen. Cochran has not publicly supported or not supported the measure, and his communications director released this statement when asked if Cochran supported the legislation: "This is a work in progress. I will continue to work with my colleagues to reach an agreement that benefits the nation."

A few disability-rights advocates met with staff from Cochran's office this morning to discuss their concerns. Scott Crawford, a local disability rights advocate and member of Jackson's ADA Advisory Council, was in the meeting and the group had a staff member on a conference call in Washington, D.C.

Advocates also met with representatives from Sen. Roger Wicker's Office. Wicker still supports the measure, a staff member in his Washington, D.C., office told the Jackson Free Press. Wicker's office has received a "mixed bag" of calls and responses to the legislation, the staffer said. Wicker released a statement last week saying that the measure was a move toward "small government."

"In almost every regard, this draft legislation represents another step to move us away from the unworkable aspects of Obamacare and toward a smaller government approach," Wicker said in a statement he released last week. "If enacted, Americans would be far better off than they are under the failing Obamacare status quo. I am confident that we will have an opportunity to make additional improvements to this proposal, addressing both the astronomical increases in health insurance premiums and the lack of choices in the market."

Jennifer Riley-Collins, the executive director of the ACLU of Mississippi, said her organization opposes any proposal to block-grant Medicaid and said that due to poverty in the state, "we do have more to lose."