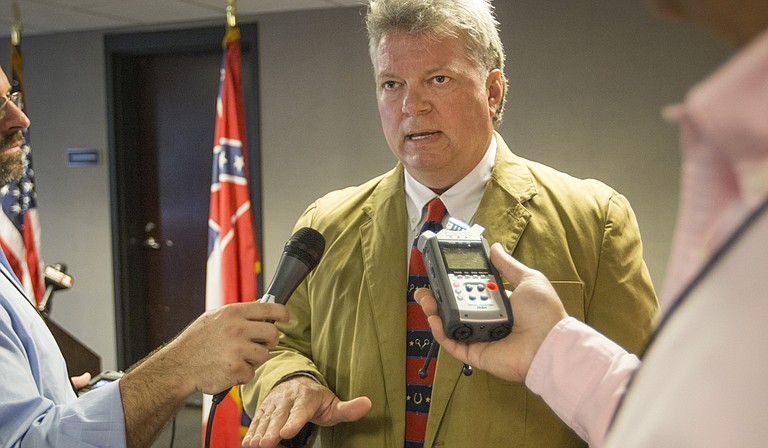 Attorney General Jim Hood said Thursday that he will ask the Mississippi Supreme Court to approve execution dates for two inmates, even though court challenges are still pending to the state's lethal injection methods. Photo by Imani Khayyam.

Hood, a Democrat, can't go ahead though until the Supreme Court finalizes rulings in both cases. A lawyer for Loden is already seeking a rehearing, and Jordan's lawyer said he will do the same. That could cause a months-long delay, and it's not clear if justices will be willing to allow executions to proceed with other challenges going on.

In a 6-3 decision, justices rejected a challenge by Jordan to use a particular injection drug because lawmakers changed state law. Justices also rejected Jordan's claim that his 41 years on death row make his execution unconstitutional.

Before this year, state law specified that a fast-acting barbiturate such as pentobarbital, meant to quickly make a prisoner unconscious, must be used in executions. Legislators rewrote the law to say any "appropriate anesthetic or sedative" can now be used before executioners would administer a paralyzing agent and a drug that stops an inmate's heart.

Mississippi plans to use the sedative midazolam, which has been repeatedly challenged nationwide because prisoners have coughed, gasped and moved for extended periods during executions. Lawyers for Jordan and others argue prisoners feel pain as drugs are administered after midazolam, violating the U.S. Constitution's ban on cruel and unusual punishment.

There has yet to be a ruling on midazolam by Mississippi's Supreme Court, and justices specifically sidestepped the question Thursday.

"Because we find Jordan's claim to be moot, we decline to address whether midazolam is or is not a permissible drug under the current statute," Presiding Justice Jess Dickinson wrote for the majority.

Last month, the court rejected a similar appeal from Loden because the law had changed.

Jordan, Loden and a third inmate are challenging midazolam in a federal lawsuit in Jackson. A fourth inmate, Charles Ray Crawford, won permission from Mississippi justices in December to challenge midazolam in state court.

"It would be extremely premature to set execution dates at this point," said Jordan's lawyer, Jim Craig of the MacArthur Justice Center.

"The punishment Jordan asks this court to vacate — his death sentence — is not itself unusual," Dickinson wrote. "Regardless of the delay, Jordan will be subjected to the same punishment as every other inmate who has been executed."

Associate Justices Jim Kitchens and Leslie King and Chief Justice William Waller Jr. dissented. They said lawyers should have gotten a chance to present arguments under the new drug law and further address the delay.