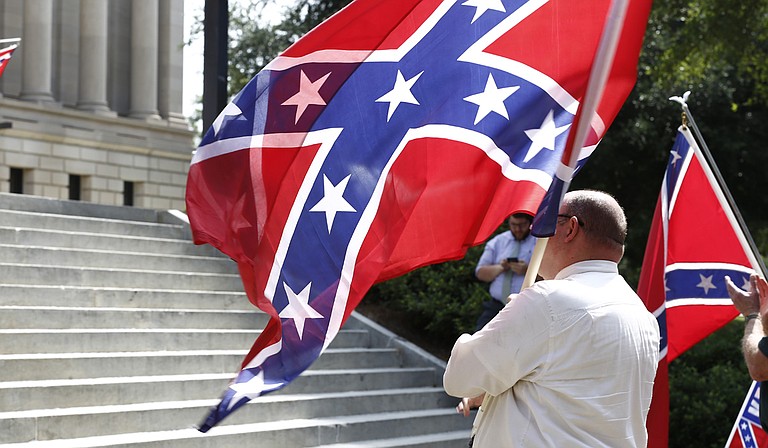 A Mississippi city with a history of racial strife is the latest local government to stop flying the state flag, which features a Confederate emblem that critics see as racist. Photo by Imani Khayyam.

MCCOMB, Miss. (AP) — A Mississippi city with a history of racial strife is the latest local government to stop flying the state flag, which features a Confederate emblem that critics see as racist.

Three black officials in McComb voted to remove the flag from city property. A white official voted to keep it.

The flag was not originally on the agenda for Tuesday's meeting of the six-member Board of Selectmen , but was added before two white members arrived, The Enterprise-Journal reported.

Selectman Ted Tullos, who is white, said he opposes removing what he called a piece of history. Selectman Ronnie Brock, who is black, replied: "I'm in favor of removing bad history. Everybody's history is not my history."

Mississippi has the last state flag in the nation that includes the Confederate battle emblem: a red field topped by a blue X dotted by white stars. The state has used the same flag since 1894 and voters chose to keep it in a 2001 statewide election.

But, several cities and counties and all eight public universities have removed it from display in recent years — many of them since the June 2015 slaying of nine black worshippers at a church in Charleston, South Carolina. The avowed white supremacist convicted in the slayings posed for photos holding a Confederate battle flag.

McComb was notorious for bombings and other violent resistance to the civil rights movement in the 1950s and 1960s.

And even today, votes on the Board of Selectmen are often divided along racial lines, with three black members voting one way on issues and three white members the other way. The mayor votes only in case of a tie. In 2016, Mayor Whitney Rawlings, who is white, broke a tie by voting with white selectmen to keep the state flag flying on city property. He told the Enterprise Journal that he now believes the flag should remain down.

About 66 percent of McComb's 12,800 residents are African-American.