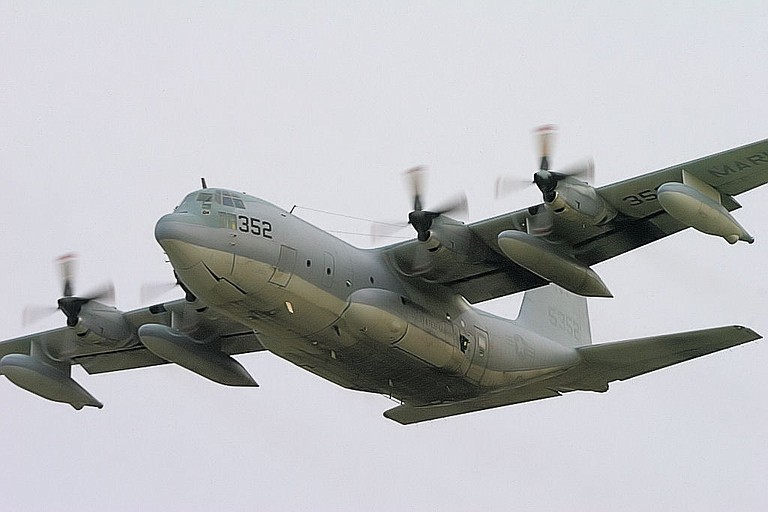 The KC-130 is used to refuel aircraft in flight and transport cargo and troops. Photo courtesy Flickr/Airwolfhound

The body of 41-year-old Marine Maj. Caine Goyette, the plane's pilot, was taken to a funeral home near Albany, New York, while a motorcade of veterans and motorcycle clubs escorted the remains of 20-year-old Cpl. Dan Baldassare to Freehold, New Jersey.

The two were among 15 Marines and a Navy sailor who died when the military transport plane slammed into soybean fields in the Mississippi Delta on July 10. It was the deadliest Marine Corps air disaster since 2005, when a transport helicopter went down during a sandstorm in Iraq, killing 30 Marines and a sailor.

WTEN-TV in Albany reported the last trip home for Goyette routed through Pennsylvania and New Jersey before heading into New York. Goyette grew up near Albany, and lived in nearby Greenville. The hearse that brought his body to a Greenville funeral home arrived around 1:30 p.m. escorted by two state police vehicles.

The motorcade for Baldassare left Dover Air Force Base in Delaware on Monday for a funeral home in Freehold. His funeral was planned for Tuesday at the Colts Neck High School football field.

Baldassare was stationed at the Stewart Air National Guard Base in Newburgh, New York.

The Marine Corps said the cause is under investigation but offered no information on whether the plane issued a distress call. The Marines said the plane was carrying personal weapons and small-arms ammunition — equipment that may have contributed to the explosion and the popping that could be heard as the wreckage burned.

Six of the Marines and the sailor were from an elite Marine Raider battalion at Camp Lejeune, North Carolina, and were headed for pre-deployment training in Yuma, Arizona, the Marine Corps said.

The KC-130 is used to refuel aircraft in flight and transport cargo and troops.