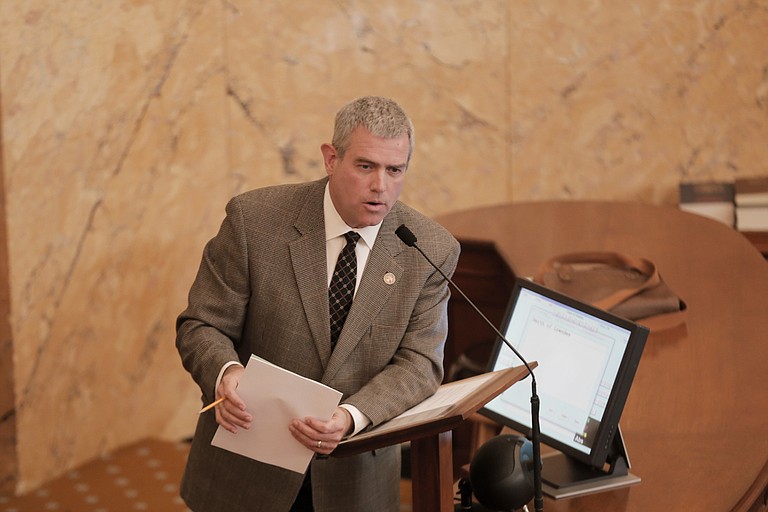 House Speaker Philip Gunn, who chairs the Southern Legislative Conference, encouraged African American lawmakers to not boycott the conference over the Mississippi flag, but to show up to talk about improving race relations. Photo by Imani Khayyam.

JACKSON — Update: This story has been updated with a response from the Mississippi Legislative Black Caucus chairwoman, Rep. Sonya Williams-Barnes, D-Gulfport.

The majority of African American lawmakers in the Mississippi Legislature plan to boycott the annual meeting of the Southern Legislative Conference in Biloxi this weekend. They are staying from from the meeting of lawmakers from around the southeast U.S. because the Confederate battle symbol still remains the canton corner of the Mississippi state flag.

The Mississippi branch of the National Association for the Advancement of Colored People supports the boycott and sent out a letter on July 12 listing the 37 senators and representatives who have committed to boycotting the conference.

The Mississippi Legislative Black Caucus announced early in May that it would boycott the Southern Legislative Conference due to the state flag.

“The MLBC has decided to boycott the event to send a clear message that the Confederate symbol needs to be removed from the state flag,” the letter says. “This event is a regional conference that could easily be held in a state (where) the Confederate flag does not fly.”

"It wasn’t like some wanted to boycott, and some didn't…that’s not what happened," she told the Jackson Free Press this afternoon. "The caucus decided to and voted to boycott."

House Speaker Philip Gunn, R-Clinton, is the chairman of the Southern Legislative Caucus. He encouraged and asked Black Caucus members to attend the conference because he supports changing the state flag.

“SLC is a good opportunity to stand with me, someone who has not wavered in support of changing the flag, to promote all that is good about our great state,” Gunn said in a press statement. “I’m proud of the 13 Mississippi Legislative Black Caucus members who are attending this event."

Thirteen representatives’ names are not on the NAACP letter, but all Senate members of the Black Caucus will boycott the conference. This morning, the Jackson Free Press confirmed that the NAACP has not received any additions or removals from this list since the organization sent the letter on July 12.

Gunn said in a press statement that SLC will have roundtable discussions on race relations, noting that the caucus has received confirmations from many African American leaders across the South that they will participate in that discussion.

“Those members who are not attending the conference are going to miss a valuable opportunity to discuss what progress can be made to improve race relations in the South,” Gunn said in a press statement.

Gunn is the only elected Republican official who supports legislative action to take down the state flag, but for the second year in a row, no bills to change the state flag made it out of committee in the 2017 legislative session. Gov. Phil Bryant and Lt. Gov. Tate Reeves, both Republicans, believe that the state flag should only change if the people vote to change it.