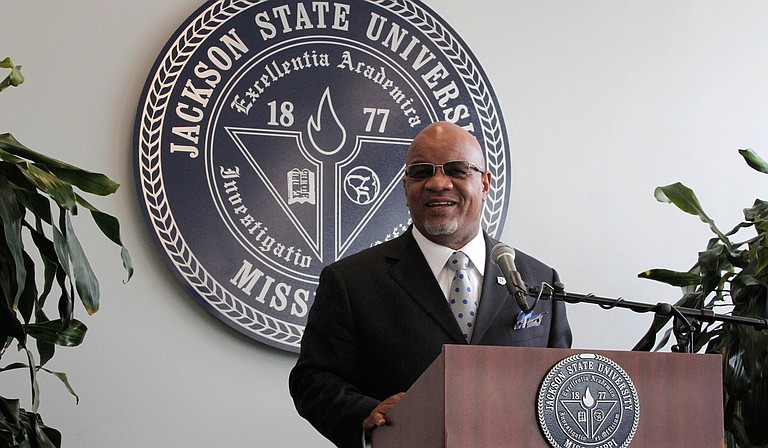 New Jackson State University President William Bynum announced today, July 20, that student scholarships would remain in place for the upcoming school year, and any changes to requirements would go into effect for the 2018-2019 school year. Photo by Arielle Dreher.

JACKSON — Returning and continuing Jackson State University students with scholarships and out-of-state fee waivers will get to keep their same financial awards for the upcoming 2017-2018 school year.

Students received an email this morning with the news, the Jackson Free Press confirmed today.

Incoming JSU President William Bynum said enrollment and application numbers had dropped last week at a press conference due in part to scholarship changes. Due to financial strains, the university was forced to make administrative and department cuts, eliminating 42 non-faculty positions earlier this year. Additionally, the Clarion-Ledger reported two weeks ago that the university would no longer offer out-of-state fee waivers to children of lifetime alumni association members. Now the new administration seems to have reversed that decision.

“To honor our promise to returning and continuing students, scholarships and out-of-state fee waivers shall remain in effect for the 2017-2018 academic year if you have met the previous renewal requirements,” an email from Bynum sent to students today says. “However, please understand that the renewal criteria for 2018-2019 have been revised.”

The letter went on to reiterate that the administration is offering a year-in-advance notice of changes to scholarships and out-of-state fee waivers. Bynum told reporters last week that he plans to implement interim President Rod Paige’s plan to scale back and recover some of the university’s funds. The plan shifts certain offices to new departments and consolidates several academic departments. Final JSU enrollment numbers will not be available until fall, and orientation for freshman and transfer students begins Aug. 14.

This story will be updated with more information as it becomes available. Email state reporter Arielle Dreher at [email protected].