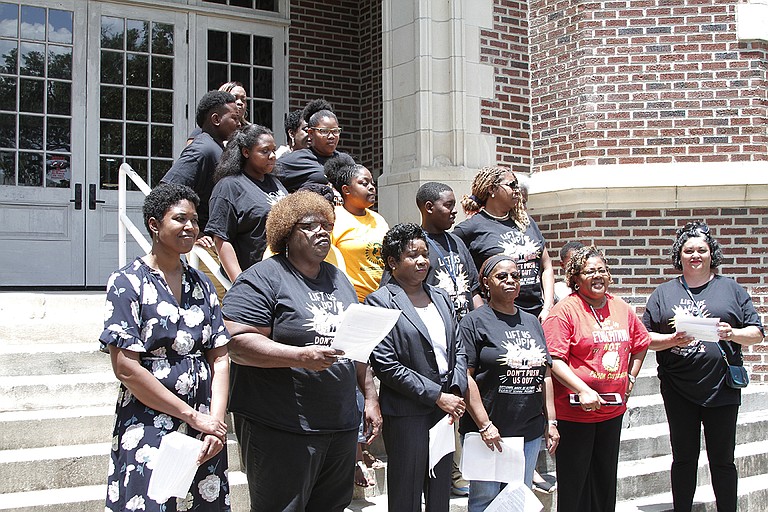 Local Dignity in Schools campaign organizers called on state education officials to prioritize root causes of the state’s achievement gaps in June, as the board approved the state’s Every Student Succeeds Act draft plan inside. Photo by Arielle Dreher.

JACKSON — Positive rather than punitive school climates are the best way to keep young people in schools, a group of community leaders and students are arguing in their Dignity in Schools campaign. A group of Mississippi organizers called on education officials to prioritize actively promoting healthy, affirming educational atmospheres as part of the federal Every Student Succeeds Act, which replaced the controversial "No Child Left Behind."

Such school climates prioritize alternatives to traditional discipline procedures, such as detention and suspension, which are typically used more harshly against young people of color. Instead, schools might choose alternatives such as school-based mental health care, restorative justice or parent and family engagement programs.

"(It's) a climate where students feel physical and emotionally safe," Legal Defense Fund Senior Policy Associate Elizabeth Olsson said last month outside the Mississippi Department of Education. "There's mutual respect between students and teachers, and students aren't in fear of being punished by unfair discipline practices that target some subgroups over others."

In June, several Mississippi community organizers and students held a press conference to advocate for safe school climates, even if the state board did not specifically include it in Mississippi's plan.

The Mississippi Board of Education could have added a school-climate component to its ESSA plan, as a way to measure proficiency in the state, but the move would have been innovative. So far, only California appears to be including school climate as an indicator for school success in its federal Every Student Succeeds Act plan, although the deadline for states to send in their plans is not until this fall.

Reporting statistics like chronic absenteeism, detentions and out-of-school suspensions are a part of tracking a school's climate. This kind of data reveals how discipline has an impact on specific student groups in school.

Mississippi's racial gap in public-school discipline is large. Of the 51,030 students who received out-of-school suspension in the state in the 2011-2012 school year, 37,897 of them were black. That means that 75 percent of students who received out-of-school suspensions in the 2011-2012 school year in Mississippi were black, federal civil-rights data show. Black students only made up 49 percent of the state's public-school system that year, however, as they do today.

Research, such as that by Dr. Russell Skiba of the Indiana University School of Education, has long proved that children of color are punished more harshly than white students for the same or lesser offenses.

In a supplementary paper titled "Are Black Kids Worse?" Skiba dispels the myth that children of color actually misbehave more than their white counterparts.

"The data are consistent: there is simply no good evidence that racial differences in discipline are due to differences in rates or types of misbehavior by students of different races," Skiba writes. In other words, the over-discipline of students of color likely stems from implicit biases of teachers and administrators. As Johanna Wald writes in her paper about de-biasing:

"There is clear evidence that children of color are punished more severely than White children for relatively minor, subjective offenses in schools. These are the very types of behaviors that require judgment and discretion by the decision-maker in determining punishment," she writes.

"There is also research that illustrates how the implicit biases or assumptions held by adults with decision-making authority lead to harsher treatment of Blacks than Whites for similar behaviors," she continues. "Considered in tandem, these two sets of studies strongly suggest that implicit racial bias contributes to the differential treatment of children of color—particularly Black boys—in school settings."

Joyce Parker, the director of Citizens for a Better Greenville, told reporters in June that improving the school climate requires getting to the root causes of why children are not successful in school, and then helps ameliorate those causes.

Research shows that positive school climates are "associated with lower rates of misconduct and discipline," Skiba writes in his "Are Black Kids Worse?" paper.

"We need to know what the root causes are and because of ESSA looking at poverty and impacts and the root causes that come along with that ... we've got to look at why children aren't being successful in school," Parker said.

The State Board of Education's ESSA proposal includes a plan to address the State of Mississippi's "failing" schools and districts with targeted coaching, supports and professional development.

"We've got to address what's happening in our 'D' and our 'F' districts across the state," Nathan Oakley, the executive director of the MDE Office of Elementary Education, said at a public hearing about the ESSA plan at the end of June.

Oakley said a primary reason the state board chose to not include school climate in Mississippi's ESSA plan is that MDE's new accountability model has only been operational for one year.

"The sense was we need to give it several years to work, so we have some sort of consistent data over time," Oakley said.

Tracking a school's climate as a way of grading each school would also put an emphasis on teacher and student absenteeism, Oakley said. Tracking attendance as a measure of school success could be problematic, especially in Mississippi where the compulsory-school laws only require children to stay in school until they are 17 years old on Sept. 1 of that school year.

Oakley emphasized that schools should share the information even though MDE is not requiring schools to do climate surveys. As a part of the ESSA plan, MDE will continue to report civil-rights data, which include school discipline, bullying, enrollment and retention statistics broken down by race, ability and gender.

The state board's long-term goal is to eliminate the proficiency gap that also persists between black and all other students entirely. Oakley said MDE will continue to use "subgroup data" (like age, race and poverty data) to target interventions to schools and districts that need the support.

Federal funding supports the bottom 5 percent of Title IA schools, which have high percentages of children from low-income families or schools with a graduation rate of less than 67 percent, under the ESSA. In Mississippi, that equals about 50 schools, which will get additional supports based on this year's data. Oakley said the roughly $12 million in federal funds MDE expects to receive after the governor signs the final ESSA plan this fall will not be enough to even provide in-person coaching and support to those 50 schools. Some schools will receive face-to-face coaching as well as professional development, while others will receive virtual coaching.

The 2016 school accountability rankings left 122 schools and 19 school districts in the state with an "F" grade, making some of those schools or districts susceptible to one of the state board's proposed remedies for its struggling schools: the achievement school district. A separate superintendent will run the statewide achievement school district, which will be implemented by the 2018-2019 school year. The district will have the option to absorb any school or district that receives an "F" grade for two years in a row or twice in three consecutive years.

MDE is screening superintendent candidates for the new district, minutes from a board meeting last spring show. Mississippians can still give feedback on the state's ESSA plan on MDE's website.