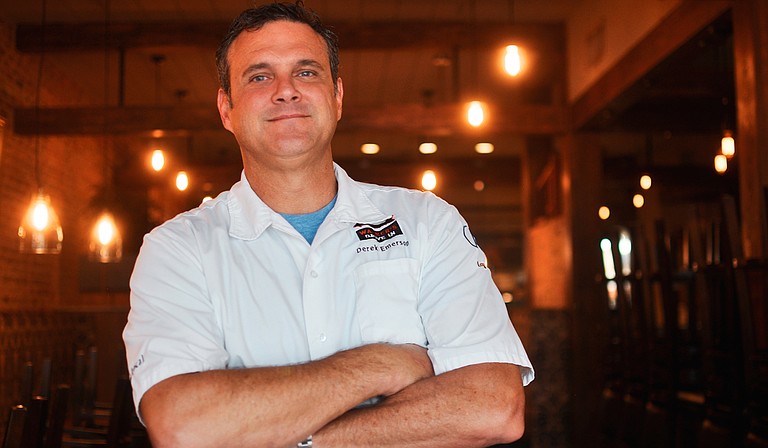 Emerson, 47, was raised in Beverly Hills, Calif. Emerson spent summers in Mississippi with his grandmother, and after one summer in Meridian, he never returned to the West Coast. Instead, he began his life in the South. After attending a small culinary school in Memphis, Emerson worked in Jackson and Atlanta before permanently returning to Mississippi to cement his place in the southern food scene.

The award-winning chef lives in Jackson with his wife and business partner, Jennifer, and their family. The couple has four kids: Finley, Olivia, Alexandra and Avery.

The late Craig Noone opened Parlor Market in 2010 in downtown Jackson. The restaurant came under Emerson's direction during the last week of May 2017.

The Jackson Free Press spoke with him recently about his new venture.

Tell me about how you got involved in the restaurant industry.

I started out on Subway on Northside Drive when I was 18 going to Hinds Community College. My family has always been into food. I just decided when I was 21 to go to a culinary school in Memphis, and I've been cooking ever since. My grandmother is from the South, and she always laid out a huge Sunday dinner. It was something that I grew up around that I was always good at.

How is Parlor Market different from your other restaurants?

We just added a twist. ... We really want to bring something new that's going to improve the dining scene, and not just take from somebody else's concept. We want to add a new flavor and new idea. Craig had a vision of a high-end restaurant in downtown. We want to make sure to keep his dream alive. This is a rustic place, and we changed the concept to Italian food with southern seasonal influences.

How do you balance life at four restaurants? What's it like?

A lot of driving, I guess. Three of our kids are older, so it makes balancing these a little easier. I just try to stick my head in each of the restaurants. Really without the staff and crew that we've assembled over the years, it wouldn't be possible. If it was just me, this would never happen.

I've been surrounding myself with good people—people that I trust and can give control to. I have a bunch of like-minded people around me.

Why is staying local important to you?

The new pasta dishes that we're doing are great. We do a grilled octopus puttanesca that's really good, and our meatballs are delicious. The chef from Local 463 makes the bolognese. Someone told me the other day that it was the new redfish Anna, one of our staple dishes at the other restaurants.

For Parlor Market, (we rolled) out a new menu on July 10. I hope to continue adding to the dining experience in Jackson and trying to make it a destination with great restaurants.