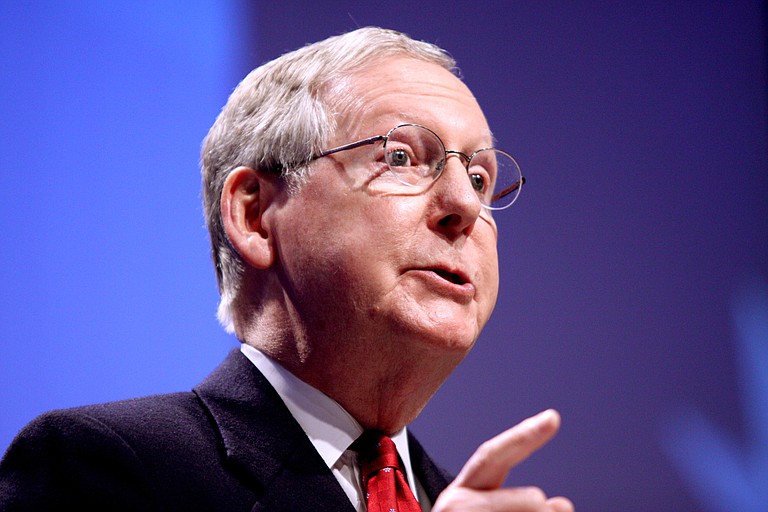 WASHINGTON (AP) — Senate Republicans will unveil their revised health care bill Thursday and begin voting on it next week, Majority Leader Mitch McConnell said Tuesday. He said he would delay the chamber's August recess for two weeks as the GOP tries breaking logjams that have slowed work on that and other issues.

McConnell, R-Ky., described his plans to reporters as the prospects for the divided party's drive to repeal much of President Barack Obama's health care law seemed as gloomy as ever. Earlier, one Republican senator said he is "very pessimistic" that the health care measure will be approved, while another warned leaders about retaliation by conservative voters should they react to a collapse of the measure by striking a deal with Democrats.

Underscoring the uncertainty, No. 3 Senate GOP leader John Thune of South Dakota would not make predictions about the health care vote.

"I think we have narrowed it down to where we know where the decision points are," he said.

With at least a dozen Republicans opposing or challenging parts of McConnell's bill, the leader has been working on revisions aimed at bringing more GOP senators on board. These included how tightly to curb the growth of Medicaid, the health insurance program for the poor; whether to let insurers sell low-cost policies with very limited coverage; and how much money to devote to making health care tax credits more generous.

"I'm very pessimistic," Sen. Charles Grassley, R-Iowa, said on the Fox News Channel of the chances a bill will pass.

Grassley, first elected in 1980, said that Republicans have been promising for years to repeal Obama's 2010 statute and said, "There are consequences if you don't deliver on election promises, and there ought to be."

Over the weekend, Grassley tweeted that if Republicans don't complete a bill, "WE WILL GO FROM MAJORITY TO MINORITY."

With Democrats solidly against the effort, Republicans will lose if just three of their 52 senators oppose it. McConnell has said if the wide-ranging bill fails, he'd pursue a narrower measure aimed at propping up insurance markets — an effort that would likely require talks with Democrats.

"I think that's the wrong strategy," Sen. Rand Paul, R-Ky., said on Fox News Channel about the possibility of a bipartisan deal on a smaller scale bill. "And I think Republicans will be very unhappy across the land if the Republican leadership gives up and goes and works with the Democrats."

Paul, among several Republicans who've said they'll oppose the initial GOP bill unless it's changed, also suggested he wouldn't support the legislation even if an amendment embraced by other conservatives is included.

Sens. Ted Cruz, R-Texas, and Mike Lee, R-Utah, are pushing a revision to let insurers sell low-price policies with bare-bones coverage, as long as the company also sells a policy that covers a list of services like maternity care that Obama's law mandates.

But the overall bill also contains more than $100 billion that states could give to insurers to help them contain premiums. Paul said if the Cruz language is included in the bill in exchange for retaining that money, "this is a tradeoff that I'm not necessarily willing to take."

He added, "That to me is not a pro-free market tradeoff."

Congress has three weeks until the scheduled start of its August recess. But with growing numbers of Republicans calling for a delay of their break, McConnell said Tuesday that it would not start until the middle of that month.

In a written statement, McConnell said the chamber would use that time to work on health care, defense and some of President Donald Trump's nominations.

It was possible the Senate could begin its recess earlier than that.