This Little Light of Ours: Mississippi Civil Rights Museum Shines a Light on History 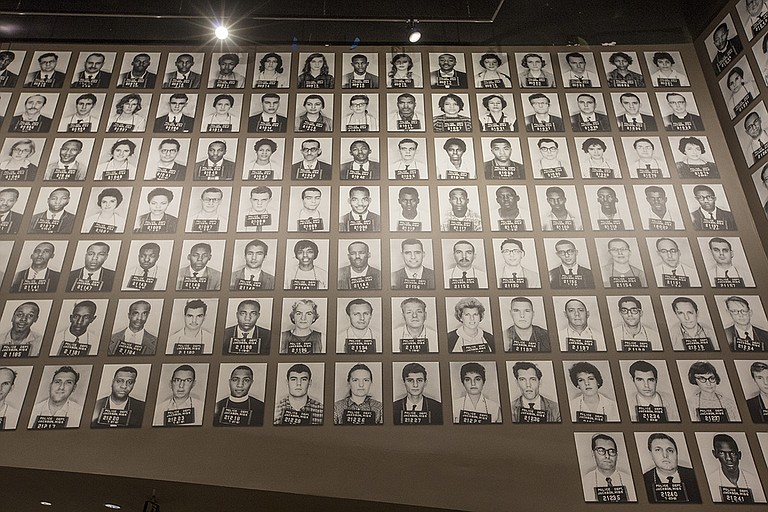 The people in the mugshots are black, white, mostly in their teens and 20s, some older. Some are smiling; most look defiant. A placard hangs around their necks, reading "Police Dept. Jackson, Miss, 7-30-61."

Despite the possibility of being killed along the way, the diverse group joined together from various places in the United States to ride into downtown Jackson with a courageous mission—a new priority for Mississippi and the country in July 1961. They were demanding the right to equal, integrated public accommodations and dignity for black people. And they wanted cameras to capture southerners' often violent response to that demand.

One by one, as the riders got off the Greyhound bus, the local police put them into the paddy wagon, and they were sent off. Many were put in Parchman, the state penitentiary, in north Mississippi, sleeping on hard floors and facing verbal and physical abuse.

Some of the jailed riders did not see their families for months on end.

Those photos now hang on the walls of country's first state-funded civil rights museum, which opens in December in downtown Jackson, just blocks from where those Freedom Riders faced arrest after a terrifying bus trip starting in Washington, D.C.

Looking at the walls still covered in mugshots, the museum's new director, Pamela Junior, made it personal as an African American woman who grew up in Jackson in darker times.

"They were fighting for a cause for someone like me, so that I have the rights of all rights as a human being. That's what they fought for," she told reporters staring at the mugshots.

The exhibit will include video of the riders telling their own stories about prison and activism, Junior said. It will include a jail cell modeled after the ones that held the Freedom Riders. "We just want to give the patrons a visual of how it would be to be in Parchman," Junior said.

A Cause to Die For?

The Mississippi Civil Rights Museum opened its doors temporarily on Tuesday, June 27, for a preview of the impactful, honest and focused features, like the Freedom Riders exhibit.

Next door, and connected by a shared entry space, the Museum of Mississippi History covers the state's history, beginning back in 5,000 B.C. to the Great Flood of 1927. The Mississippi Civil Rights Museum narrows its scope from the 1945 to 1970 time period, which encompasses the Civil Rights Movement.

For Junior, the opportunity to tell and hear the stories of the Civil Rights Movement is an extremely important task for all generations. "Think about this: Is there a cause that you would die for?" she said outside the museum.

The legs of history in the museum all connect to a heart of sorts. The main reflection room with blinding natural light displays quotes and illustrations on the walls as "This Little Light of Mine" will fill the air; that hymn was an anthem for Mississippi sharecropper-turned-activist Fannie Lou Hamer, among others. Singing together was a way to keep focused and spirits high for civil-rights activists of the time.

As Junior described plans for the room, one could almost hear the inspiring song circle the room.

"You'll have the time to reflect each time you come out of a gallery," Junior said, explaining the strategy.

The museum begins with a timeline from slavery to freedom, starting with captives on ships coming to America against their will. Junior said the timeline helps start the conversation for the themes of the different galleries by taking a step back to understand the roots of the state's racial history.

Dr. Doris Derby, a civil-rights activist, told Junior the museum is in line with the National Civil Rights Museum in Memphis, which is on the site where a white supremacist assassinated Martin Luther King Jr. The compliment, Junior says, meant the world to her.

"Through the organizing, the strategizing, the mobilization, they took after the Movement," Junior said. "We have all these different movements going one, but they need to talk to the veterans who were a part of the Movement."

An art installation reads, “One Mississippi, Many Stories.” The phrase is the theme for the Museum of Mississippi History, which opens on Dec. 9.

In addition to the Freedom Riders, the museum focuses on murdered teenager Emmett Till, including the doors from the grocery store of Carolyn Bryant, whose husband later killed the boy. It also spotlights the Movement martyr Medgar Evers and his widow Myrlie Evers-Williams, Black Empowerment and a final gallery, "What's Next?"

"Black power is bringing everybody together," Junior said. "It is about bringing people together for empowerment."

She highlighted a phrase from civil-rights activist Bob Moses, who helped start Freedom Summer here in 1964, about "breaking Mississippi" as an example for the nation. The state then was one of the most entrenched on keeping Jim Crow segregation laws in place. Anyone of any race who violated the state-enforced segregation was likely to be spied on, threatened, publicly disparaged, boycotted, injured or killed.

Photographs provide the best storytelling of the time, Junior said.

"Artifacts are really hard to get for a young movement like the Civil Rights Movement, so we have a lot of images," Junior said.

The visuals and stories will be important for young people to see so they can better understand the movement, Junior said. Most of the activists on the front lines of the civil-rights fight in Mississippi were in their teens or 20s.

It's still too early to see how the Museum of Mississippi History next door will ultimately look. The building itself is more traditional architecture than the younger-feeling, more modern design of the museum documenting the rebellion that Junior directs.

The exhibits in the Mississippi History museum are young and almost all are under construction. Director Rachel Myers spent the tour explaining how patrons will experience it.

The museum, which spans two floors and 12 galleries, starts like all good stories: at the beginning. In this case, it begins with prehistoric Mississippi.

"We are giving the time and context of what Mississippi was like," Myers said. "You'll understand what is was like to be a traveler in that time." 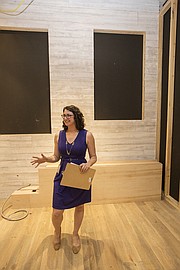 Museum of Mississippi History Director Rachel Myers stands in a replica of the oldest African American church in Jackson, Mount Helm Baptist Church, inside the museum on June 27, 2017. The room will serve as an immersive theater in the museum after opening on Dec. 9.

Near the entrance, Myers painted a picture of what the first exhibit will look like with a 500-year-old canoe as the center focus of the room, a nod to the state's native inhabitants.

The museum will feature four immersive theaters to educate audiences on the subject matter and time periods. One theater is modeled after the oldest African American church in Jackson, Mount Helm Baptist Church.

Visitors will sit on replicas of the original pews to watch a film on Reconstruction, the period after Mississippi and other Confederate states lost the Civil War and slavery ended.

Reconstruction was a 12-year span from 1865 to 1877 in which the United States, after defeating the South, worked to "reconstruct" the region, including giving African Americans more rights. It is the only time in Mississippi's history to date that African Americans held statewide elected office, even though the state has a higher proportion of black residents than any other state.

The brief period of equal rights, however, ended in 1877 with a national compromise by the Republicans who had led the effort to free slaves. Agreeing to the political Compromise of 1877 ended Republican protection of the rights of black people in the South, clearing the way for new southern laws to keep black residents from gaining wealth and claiming political power, or even the right or ability to vote.

Southern states like Mississippi responded to the end of Reconstruction by instituting even more "black codes"—based on old slavery codes—to take away newly earned rights of freed slaves, including the right to vote and use public accommodations, own property and other restrictions. The end of Reconstruction also saw "Jim Crow" laws take hold that would legally restrict freedoms, including attending "white" public schools, until the Civil Rights Movement led to U.S. Supreme Court decisions starting in the 1950s.

"Jim Crow" was a pejorative for a black person in the 19th century and was the name of actual anti-integration laws in Mississippi until civil-rights activists broke the back of Jim Crow laws near the end of the 1960s.

The history museum's theme, "One Mississippi, Many Stories," presents the history of the state while giving museum-goers the opportunity to reflect. "There will be a variety of first-person accounts," Myers said. "Those whose voices were not really represented in the past, we get to do this in a special way through a digital interactive."

In addition to the immersive theaters, interactive exhibits will educate audiences and explain the state's varied and complicated history. An example includes the different types of weaponry soldiers used in the Civil War including guns, mortars and howitzers.

"This museum was brought together by variety of people over many, many years," Myers said. "It feels good for us to have such authentic voices here in the museum."

Myers said "reflection rooms" will be in different parts of the museum for people to tell their own Mississippi stories, which will be displayed on screen.

"This will be the spot where our contemporary videos will show," Myers said. "You'll be able to sit and record your own stories."

On the second floor, a balcony overlooks the maze of Mississippi history down below. Myers declares it the "selfie spot" because she expects many photos to happen there.

"You get a sense of the amount of history" from that spot, Myers said.

Mississippi's Department of Archives and History will take possession of the museums at the end of the summer. They are currently under construction and still in the possession of contractors. Artifact installation for both museums will begin in fall 2017. The museums open to the public Dec. 9, 2017, at 11 a.m.