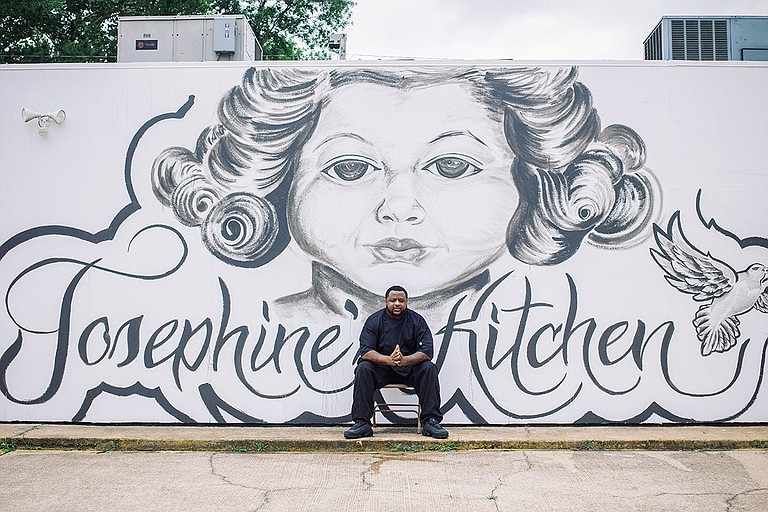 "Extreme potatoes" is not a term people use often, but at Josephine's Kitchen, it's part of the menu.

Owner and Executive Chef Lee Vance III says that for the restaurant's dish, he takes a fresh Idaho potato and slices it up potato-chip thin, covers it with a special blend of seasoning, drops it in the deep fryer for five to seven minutes, and then tops it off with any meat such as steak, shrimp, chicken or sausage. Then he covers the whole thing with cheese, bacon bits and broccoli.

"One plate of this could probably feed you for the whole day,"  he says.

Vance opened the restaurant this year inside the former location of Flood's Bar and Grill, where he says he once worked as an event promoter. The menu at Josephine's includes steak, shrimp, pasta, burgers and fish. Vance, who says he is a self-taught cook, created all of his own recipes and does all the cooking himself.

Josephine’s Kitchen has dishes such as “extreme potatoes” with choices of meat such as chicken.

Born and raised in Jackson, Vance, 31, graduated from Christ Missionary & Industrial School in Jackson in 2004 and went to work unloading trucks for the United States Postal Service until 2006. In 2009, he opened an event promotion business called 80's Babies. He met Houston Turnage, who owned Flood's Bar and Grill, while promoting for his venue. When Turnage passed away and the building went up for sale, Vance decided to buy it and turn it into a bar and grill, naming it after his grandmother, Josephine.

Vance decided to do all the cooking at Josephine's himself rather than hire anyone to cook for him. Though he initially only planned to cook burgers, he also started making chicken wings and then expanded to chicken tenders and salads, eventually developing an entire menu of original dishes item by item.

"Cooking has always run in the family," Vance says. "My grandmother was a great cook who used to walk every day to her job working at the cafeteria in Baptist Medical Center when I was a boy, and my mother learned it from her. I took up cooking myself and just took to experimenting and blending different things together. Now I get people coming through all day every day, and I've seen people line up around the building. It just seems like a blessing from God."

While Vance does all the in-house cooking at Josephine's, his family members also sometimes provide dishes of their own. Vance's sister and brother-in-law, Jamila and Alloit Green, prepare signature barbecue dishes once or twice a month when visiting from New Orleans, and Vance's aunt, Joanne Vance, bakes cakes using Josephine Vance's original recipes.