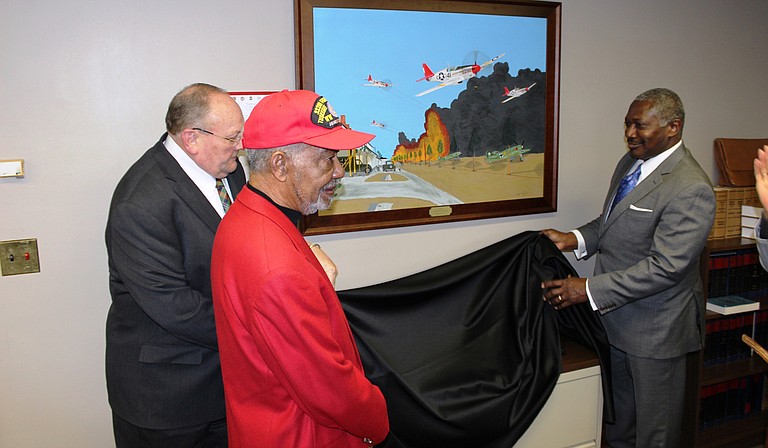 "Aviation was my first love," the 77-year-old McComb native said about his preferred subject matter.

Growing up, Martin to wanted to become a pilot, but was born with a hole in his inner right ear that prevented him from meeting the physical requirements to become a pilot, due to how to the high-altitude pressure would affect him.

"That was a big disappointment for me," he said. "Flying is the closest thing to being free that you'll ever have."

Martin says he has also always enjoyed art. In primary school, teachers told him that he had a gift for drawing, and he even hoped to go to art school for a while.

"But at that time, black kids were not being taught the world of artistry, of painting," he said.

After Martin graduated high school in 1956, he went straight into the military and served for about four years. After his service, he moved to California, went to dental school and earned his doctorate at the University of California in Los Angeles in 1967. He moved back to Mississippi in 2004.

After he retired from dentistry in 2001, Martin knew he needed to do something to occupy his mind and keep him sharp, so he combined two of his passions—aviation and art.

A large part of Martin's inspiration for his aviation paintings comes from people in his life, including his uncle Walter Downs, who was an original Red Tail fighter pilot; a B-25 fighter pilot from Martin's hometown; and his own involvement with the Tuskegee Airmen chapters across the country.

"I've been so fortunate to be around these guys for so long," he said. "(They) needed some help as far as people knowing who they are, and that was a motivational factor for me."

Through his 14 years of painting, Martin says his favorite piece of his own work is probably "The Longest Mission Ever Flown." It depicts the Tuskegee Airmen's 1,600-mile round-trip mission, where P-51 Mustangs, which Colonel Benjamin O. Davis led, escorted B-17 bombers into Berlin and back, shooting down three German planes in a single day.

"I always try to do paintings that have a significant meaning," Martin says. He says he also works hard for his paintings to have accurate depictions of their subject matter.

"For example, you want to actually have all the pertinent markings on the airplane that you're painting," he says. "If someone should come up to me and say, 'Well, this is not accurate, what you painted,' I really don't want to hear that, so I do extensive research to make sure the markings on each airplane are accurate."

When asked if he does much work on subject matter outside of aviation, Martin laughed.

"I've done one or two (paintings) of the magnolia flower. I have them hanging up in the house; the wife (Madeline Martin) jumped on me and said, 'You've got to do something for me,'" he said.

Martin, who currently lives in Hattiesburg, takes great pride in "Surprise!" being hung in his home state's capitol.

"It's one of the highlights of my lifetime," he said, "as far as the aviation artistry world is concerned."