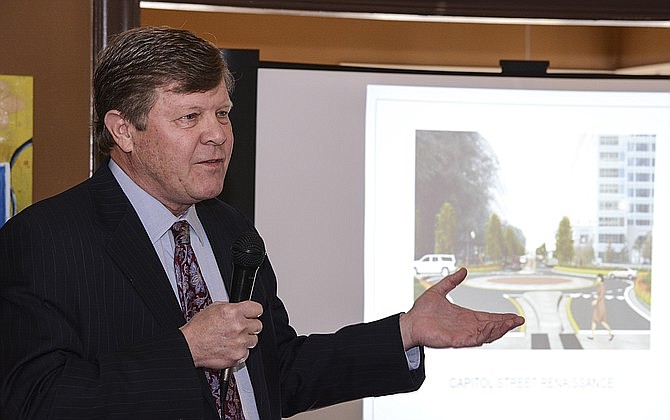 Downtown Jackson Partners President Ben Allen goes on trial Jan. 30 on accusations of embezzling a pickup truck and thousands of dollars. He maintains in legal filings, including a report from the state auditor’s office, that he is innocent of the charges. Photo by Trip Burns.

The trial of Downtown Jackson Partners President Ben Allen, who has been accused on 10 counts, including embezzling a 1989 Chevy truck and tens of thousands of dollars from the development group, is set to begin Jan. 30. The trial is moving ahead even as Allen's attorneys say that the case against Allen is against Mr. Allen is "defective as a matter of law" based on a report by State Auditor Stacey Pickering's office and other evidence the defense has compiled.

Allen's attorney, Merrida Coxwell, states in a November motion that the auditor's report fully supports Allen's innocence, emphasizing that the auditor found the funds Allen used to be private money.

"It is clear from (the report) that the OSA never concluded that a crime occurred, that Mr. Allen committed a crime, or that these funds were public funds," the Nov. 28 motion states.

A Hinds County grand jury indicted Allen in February 2016, but the grand jury did not release it to the public until early March. The grand jury charged Allen with 10 counts, eight of which are for violating Mississippi Code 97-11-25, a special law governing embezzlement by public officials. Downtown Jackson Partners, a business improvement district, draws on taxes from businesses within the footprint of the BID.

The ninth count is for allegedly defrauding the DJP of $65,754.24 to use for a business-incubator program, which was supposedly one of the organization's projects.

The last count alleges that Allen violated Mississippi Code 97-13-15, which prohibits any corporation from giving or donating an excess of $1,000 per year to a political campaign or candidate. The indictment accuses Allen, while serving as head of DJP, of donating approximately $86,000 to Mayor Tony Yarber's inaugural campaign gala from April 16 to June 21, 2014.

The eight counts of embezzlement vary both in the amount and type. For instance, the first count states that Allen took possession of a 1989 Chevrolet pickup valued at $3,500 in March 2010 and never returned it. The second count accuses Allen of spending $2,724.76 for repairs to the same truck from March 2010 to December 2012, and the third alleges that Allen spent $1,810.21 of DJP funds from September 2010 to January 2014 for the truck's insurance coverage.

Counts four through six allege that Allen spent various amounts from DJP funds to cover his and his wife's credit-card debt and phone bills. The fourth count alleges that from September 2010 to January 2014, Allen used $1,738.37 to pay off a cell-phone bill for his wife and himself. The DJP also allegedly footed the bill for $6,620.97 of Allen's AAA Financial Credit Card bill from November 2009 to May 2011.

Count six raises the amount up to $38,372.99, alleging that Allen used DJP funds to cover his personal Capital One credit-card bill from August 2010 to July 2014.

Merrida Coxwell, who is Allen's attorney, filed a motion on Nov. 28 that contained more than 100 pages of evidence that he says proves that the Hinds County district attorney's office has no claim to charge Allen.

"The ten (10) counts in the Indictment charged against Mr. Allen are defective as a matter of law. The Court should dismiss the counts against Mr. Allen," Coxwell's motion states. "If the prosecutor feels the Court is wrong, then he can appeal the dismissal to the Mississippi Supreme Court. Otherwise, the law and evidence are clear that Downtown Jackson Partners manages private money coming from assessments. It is not public money. In these types of matters, doubts should always be resolved in favor of the accused."

To understand this distinction between public and private money, it is easier to go back to the beginning, in March 20, 2014, when the State Auditor's Office received a complaint from Linda Brune, Allen's executive assistant, accusing her boss of embezzling money and donations from the DJP for years. She registered with the OSA as an official whistleblower, and the auditor's office began an investigation, eventually writing a report with their findings.

The auditor's report interested Hinds County District Attorney Robert Shuler Smith, who brought the case before the grand jury to indict Allen on the charges he currently faces.

However, Coxwell's motion recounts that Smith could not get the auditor's report from the investigators, who argued that it was a part of an ongoing investigation. Smith, however, indicted two of the OSA investigators with hindering prosecution on Feb. 26, 2016, stating that the OSA was intentionally hiding the report.

This is the same charge that Smith himself faced during his two-and-a-half-week-long trial, which recently ended in a mistrial.

Brune attended most days of the Smith trial, listening and taking notes from the upper or lower galley. When a reporter asked her if the reason for her attendance was related to the criminal charges against Allen, she said she was simply "interested" and refused the opportunity to make further comment.

The trial is set for Jan. 30 in the Hinds County Courthouse in downtown Jackson.