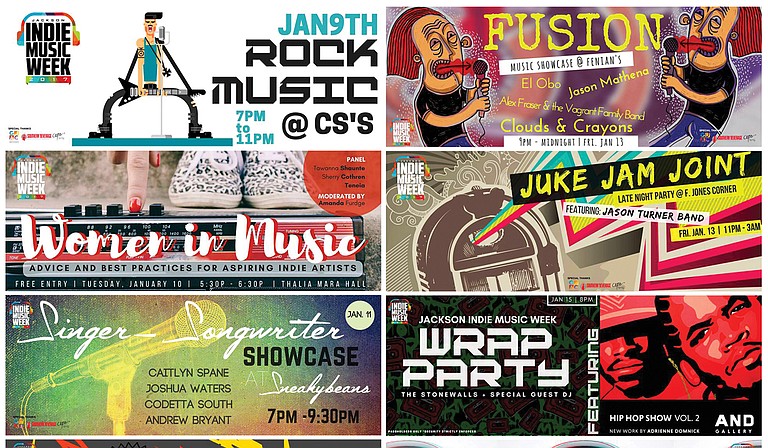 The second annual Jackson Indie Music Week is approaching fast, with many concerts, showcases, panel discussions, and other activities that highlight music from around the state, the region and the country.

It can be tough to navigate all the events, and you will want to make sure you aren't on the wrong side of town as your favorite acts take the stage.Here's a handy rundown to help.

JIMW delivers two women-focused activities to Tuesday night, and both are worth checking out no matter your gender. For the first event, which takes place at 5:30 p.m. on the mezzanine level at Thalia Mara Hall (255 E. Pascagoula St.), Jackson singer-songwriters Tawanna Shaunte, Sherry Cothren and Teneia Sanders, along with moderator Amanda Furdge, participate in a panel discussion on the current climate for women in the entertainment world.

There is only one JIMW event for Wednesday—at least one in name. Garrad Lee and Cody Cox present the latest installment of their Blender concert series, and this time around, it's a four-pronged attack on downtown.

Then, from 9 p.m. to midnight, you can catch local acts, rapper Shawty 4'8" and indie-rock band Dream Cult, along with Oxford, Miss.-based electronic act And the Echo at One Block East (642 Tombigbee St.).

If you're looking for a less formal event, Sneaky Beans (2914 N. State St.) is hosting a singer-songwriter showcase with music from Mississippi artists Caitlyn Spane, Joshua Waters, Codetta South and Andrew Bryant from 7 p.m. to 9:30 p.m.

Afterward, you can head down the hill to Fondren Underground (2906 N. State St.) from 10 p.m. to midnight for the Icon Awards After-Party, where Hattiesburg funk-jazz-fusion band Friends Fly South will perform.

With the weekend, Jackson Indie Music Week delivers even more concerts, showcases and other activities. First up is the festival's second music-industry panel, Do the Knowledge, which takes place at Hal & Mal's from 6 p.m. to 7:30 p.m. Entertainment attorney Kamel King, local show promoter Caleb Rowe and touring deejay T-Lewis, along with moderator Garrad Lee, will share their experiences and tips from their trade.

Stay after the panel for the "Live from the Underground" Hip-Hop Concert featuring Meridian native Big Sant, Hollywood Luck, 5th Child, Savvy, Sir Flywalker and E1ght from 8 p.m. to 11 p.m.

For a change of scenery, JIMW will offer a showcase at Fenian's Pub (901 E. Fortification St.) from 9 p.m. to midnight, with performances from Jackson-based artists El Obo, Alex Fraser & the Vagrant Family Band, Jason Mathena and Clouds & Crayons. Night owls can also head to F. Jones Corner (303 N. Farish St.) from 11 p.m. to 3 a.m. for a late-night party featuring the Jason Turner Band.

Festival-goers can head to The Reclaimed Miles (140 Wesley Ave.) for a music-video showcase at 6 p.m. with works from Clouds & Crayons, 5th Child, Chief Lion, TDashMo, Yung Cymba and Arab.

Sunday may bring the end of 2017's Jackson Indie Music Week, but the festival goes out with a bang instead of a whimper, starting with the Because Brunch event from 11 a.m. to 1:30 p.m. at Green Ghost Tacos (2801 N. State St.) in Fondren with deejay leon grey.

Afterward, walk a few blocks over to Cups Espresso Cafe (2757 Old Canton Road) in Fondren for "#NEWWAVE: An Under-21 Showcase," from 2 p.m. to 5 p.m. Performers include Tribe 3, Krystal Jackson and Surfwax.

From 5 p.m. to 7 p.m., head back downtown to Russell C. Davis Planetarium for a short-film showcase with works from filmmakers such as Jordan Henry, Ashley Norwood, Isabella Kinder, Thomas Haffey and Charles Jett. And lastly, JIMW closes with its official wrap party from 8 p.m. to 10 p.m. at AND Gallery (133 Millsaps Ave.), with music from Stonewalls with a special guest deejay to be announced.

Jackson Indie Music Week 2017 is from Jan. 8-15. All-event passes are $40, and single-day passes are $15. Individual events are $5, except for the ICON Awards and the "Live from the Underground' Hip-Hop Concert, which are $10 each. For schedule updates, visit jxnindiemusic.com.