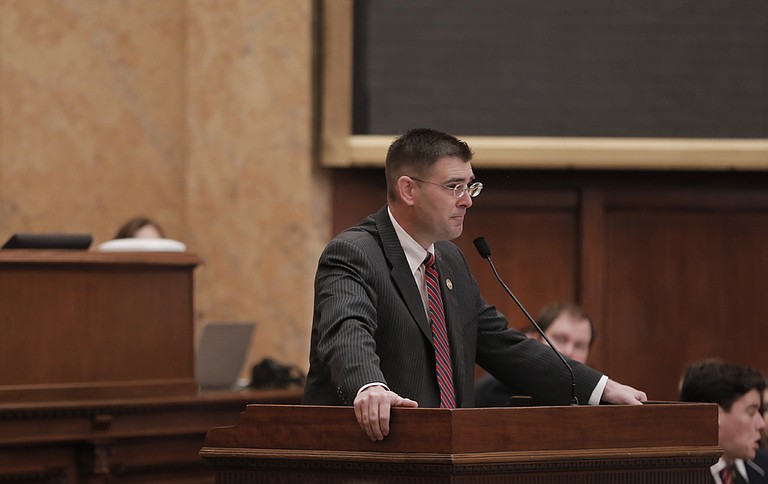 Rep. Andy Gipson, R-Braxton, chairman of the House Judiciary Committee B, said the first proposal to ban sanctuary policies, tucked in a failed immigration law in 2012, was in direct response to the Jackson ordinance. Photo by Imani Khayyam.

JACKSON, Miss. (AP) — A bill banning immigration sanctuary policies is drawing opposition from some Mississippi clergy, law enforcement and immigration advocates who say it will hurt the economy.

Senate Bill 2710 says municipalities, state agencies and public colleges can't prevent employees from asking someone's immigration status. These public agencies also can't give legal status to people who have entered the country without permission, such as by issuing an ID card.

The measure has won Senate approval and a House committee has sent an amended version to the full House. If the House votes yes, it would go back to the Senate for final approval.

Bishop Joseph Kopacz of the Catholic Diocese of Jackson says churches might consider declaring themselves sanctuaries.

"If people went to the church for safety and security, I could see pastors saying, 'They're in here and our church is sacred ground and we will not have any incidents or degradation of our facility by having a raid,'" Kopacz said. He released a statement opposing the bill, said it would hurt businesses that rely on immigrant labor.

The bill would override a 2010 Jackson ordinance aimed at reducing racial profiling that forbids officers from asking about immigration status. The first proposal to ban sanctuary policies, tucked in a failed immigration law in 2012, was in direct response to the Jackson ordinance, said Rep. Andy Gipson, R-Braxton, chairman of the House Judiciary Committee B.

Jackson Police Chief Lee Vance said earlier this month that his department's position "is to provide police service to those who request it and identifying a person's immigration status is not our primary responsibility."

Vance, though has said his department will follow state law.

Ramiro Orozco, a Mississippi immigration attorney, said the bill would wind up costing municipalities the expense of holding people in jails.

"What we're going to have is these jails housing extra people, and you're going to have to hire extra officers," Orozco said. "The county can't bill the federal government for the time. The only cost is to the county and the taxpayer."

"This bill was carefully crafted not to require anybody to do anything," he said. "It just says if you choose to adopt some sanctuary policy, that policy is not going to have any effect."

In 2014, Mississippi had about 25,000 immigrants who had entered the country without permission, the Pew Research Center estimates.

As a share of total population, Mississippi's overall foreign-born population is among the smallest in the nation.

Aside from Jackson, no other local government has sanctuary policies. A student proposal to make the University of Mississippi a sanctuary campus last year was pulled after a backlash. Gipson said that the Ole Miss proposal gave the bill extra traction.

"I don't think anybody wants to keep out folks who want to come to America legally," he said. "But the problem is we have people in our country that we don't know who they are, where they came from, why they're here, or what their motivation is."