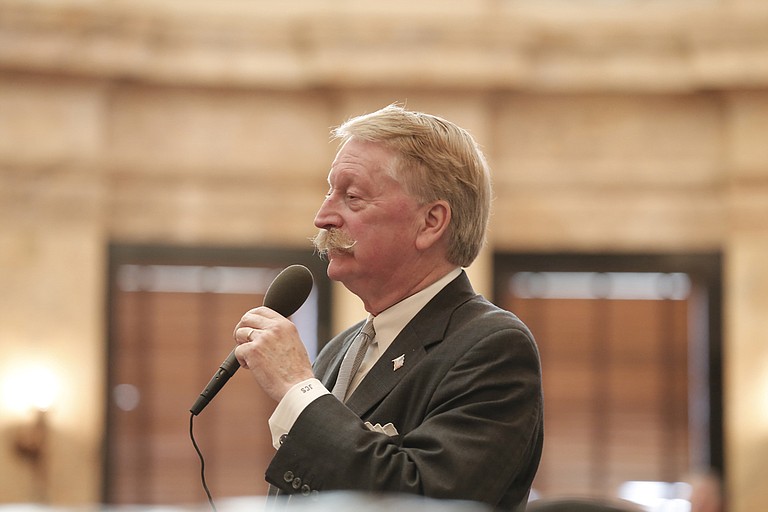 Last week, Chairman Jeff Smith asked members of the House Ways and Means Committee to vote on bills that, for all intents and purposes, had no public existence. The text of House Bills 1731, 1732 and 1733 wasn't even available in the Legislature's computer system, meaning there was no way to know everything that was in each. Photo by Imani Khayyam.

JACKSON, Miss. (AP) — It's one of the eternal truths of the Mississippi Legislature: Most lawmakers vote on bills they haven't read.

That may not square with the idealized, Schoolhouse Rock-vision of the legislative process that's taught in civics, but there are just too many bills. And unlike in Congress, Mississippi lawmakers don't each have paid staff members to examine bills for them.

Typically, lawmakers are handed stacks of bills as committee meetings begin, and can at least try to plow through the legalese while a bill is being discussed. But even then, sometimes they vote on language they haven't seen, such as an amendment that's proposed only verbally. In large part, this process is based on trust. Committee leaders aren't supposed to lie about what a bill does, although all too frequently, they may gloss over some features to which some members might object.

But a new wrinkle in legislation-by-ignorance unfolded last week, when Chairman Jeff Smith asked members of the House Ways and Means Committee to vote on bills that, for all intents and purposes, had no public existence. The text of House Bills 1731, 1732 and 1733 wasn't even available in the Legislature's computer system, meaning there was no way to know everything that was in each.

Smith, a Columbus Republican, told committee members that House Speaker Philip Gunn had just assigned the bills to the tax-writing committee and asked Smith to move them along. Of those, House Bill 1733 would have allowed lawmakers to raise fuel and cigarette taxes at a later date. The committee passed the bill without discussing possible tax increases.

The measure was apparently intended to be a vehicle to raise money for road and bridge improvements, even though Gunn, a Clinton Republican, had earlier ruled out action in remarks to reporters. Smith reversed course and killed the bill the next day without explaining why.

That leaves lawmakers with two options to provide money for transportation. House members propose to earmark any proceeds from taxes on goods sold over the internet for roads and bridges, although any such tax is likely to be subject to a legal challenge unless the U.S. Supreme Court overturns current law. The second option is House Bill 1732 , which would borrow $50 million and give it to cities and counties to replace bridges. The House passed the measure 112-6, sending it to the Senate.

Gunn has settled on the idea of another study aimed at persuading at least some anti-tax Republicans that Mississippi needs to spend more on roads, the same message that's been delivered by all the studies done so far.

House Transportation Committee Chairman Charles Busby, R-Pascagoula, said he's crafting a plan to seek a consultant, and mentioned Texas A&M University's Transportation Institute as one group he'd like to consider hiring. He said the House Management Committee was likely to make the decision, based on responses to a request for proposals. But Busby acknowledges that the House is split into "factions" over road spending, saying that prior studies have been dismissed as biased in favor of more spending by anti-tax Republicans. He said that maybe the most important thing is to get findings that won't be again discarded.

"Before we do a study, I'd like to make sure we select somebody the body agrees is unbiased," Busby said.

He also expressed interest in building a case that Mississippians are already paying for bad roads through vehicle damage, detours, and higher auto insurance rates.

"There's nothing conservative about letting our roads go to pot," he said.

Of course, it also might not be so smart to vote on unseen bills. But it happens.