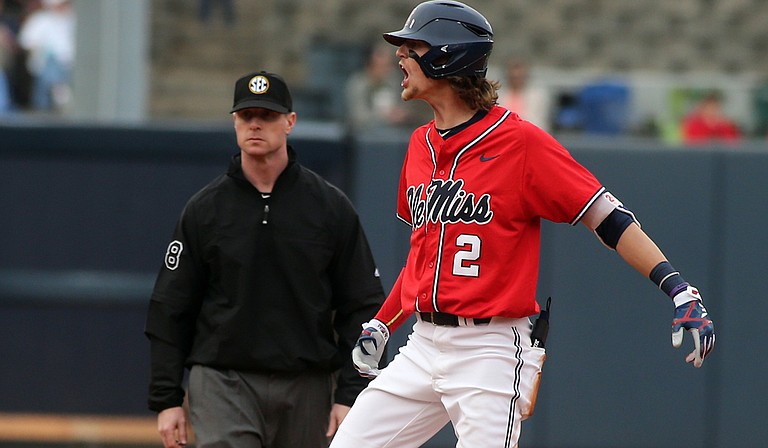 It has been a week of highs and lows for University of Mississippi center fielder Ryan Olenek. In three games against No. 6 ranked East Carolina University, the sophomore came up big at the plate.

Olenek moved from right field to center field after the Rebels lost last year's center fielder, J.B. Woodman, who was drafted in the second round of the 2016 MLB Draft. Olenek moved to the top of the batting order to start this season, as well.

The Winter Springs, Fla., native didn't slow down much in game two of the series. He went 2-for-5 at the plate with a run for his second multi-hit game of the season in a 3-2 win over ECU.

In the final game, Olenek struggled at the plate, going 1-for-4, but his one hit was the biggest in the game. As the Rebels trailed by four runs, Olenek capped off a five-run rally with a two-run double that put UM up for good in an 8-6 win for the sweep of the Pirates.

During the three-game series, Olenek went 6-for-13 for a .462 batting average with two doubles, two RBI, two runs scored and a stolen base. These efforts earned him his first weekly awards, as he was named SEC Player of the Week.

Olenek wasn't on the field during the Rebels' next game against Arkansas State University. He was given a one-game suspension for what Head Coach Mike Bianco called "unsportsmanlike conduct during an isolated incident" during the series final against East Carolina.

The Rebels won 16-4 over Arkansas State even with Olenek out of the lineup. UM is one of three SEC schools still undefeated during the young season. Texas A&M University and the University of Arkansas are the other two.

In his high-school career, Olenek started at Trinity Preparatory School and baseball scouting service Perfect Game considered him the 13th best shortstop in the state of Florida. He batted .365 during his high-school career. In his senior season, Perfect Game named him 2015 Honorable Mention All-American and Honorable Mention All-Region (Florida).

As a senior he produced 19 hits and 12 RBI in 53 plate appearances. He was a pitcher his senior year and finished the season with a 1.14 ERA while striking out 44 batters in 43 innings of work.

In his freshman season at UM, he saw action in 53 games with 48 starts. Olenek started nearly everywhere for the Rebels, making 36 starts in right field, seven starts in left field, three at designated hitter, one at third base and one at shortstop.

The Rebels hit the field again this weekend with a three-game series against the University of North Carolina Wilmington. The series begins Friday with a 4 p.m. first pitch, and Saturday and Sunday games with a noon first pitch. Fans can watch all three games on SECN+.

UM finishes the month of February with a midweek game against the University of Memphis on Tuesday, Feb. 28, which will be carried on the SECN+. All four will be home games for the Rebels.