The Squeeze: A First Look at Upcoming Budget Cuts 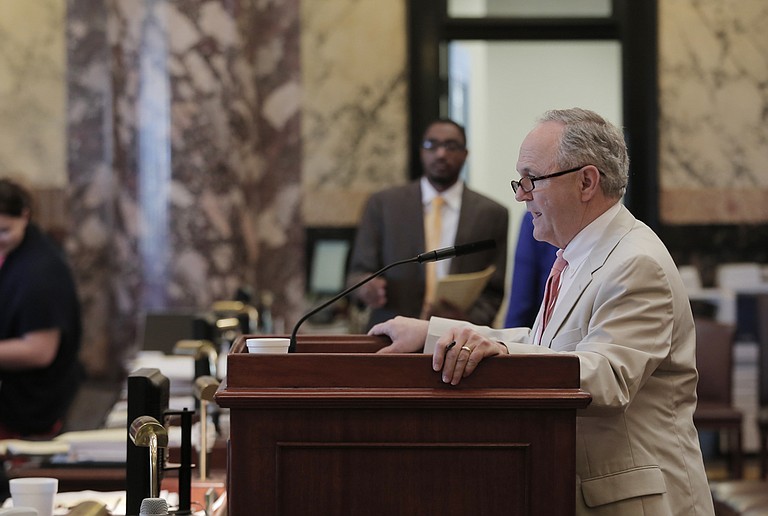 Sen. Buck Clarke, R-Hollandale, told the Senate that if some budgets are to be increased, others will have to be cut even more in a tight budget year. Photo by Imani Khayyam.

JACKSON — Budget cuts are coming, and lawmakers are beginning to discuss the finagling of state dollars for the fiscal year that starts in July. Last week, the Mississippi Senate and the House approved first drafts of their budget bills, which include cuts for most state agencies, including the Departments of Corrections, Health and Mental Health, and virtually every other state agency. The only exceptions are a handful of niche budgets like general education and vocational and technical education funds and some Department of Finance and Administration funds.

The proposed budget cuts come in the midst of yet another budget cut to the current state budget that Gov. Phil Bryant announced on Feb. 21. The governor cut $43 million from most state agencies (about a 0.9 percent cut) as well as diverted $7 million from the state's rainy day fund to patch up the holes.

The Mississippi National Guard could be cut by half a million dollars if the current version of its appropriation bill becomes law. Senators expressed concern at the cut, saying the Guard has made the best of every dollar the state has given them. Sen. David Parker, R-Olive Branch, pointed out that cutting more than $500,000 means much less funding for the group that benefits from a three-to-one federal match.

"We cannot afford to have this cut made to this level to this program—we just cannot," Parker said on Feb. 15.

The state's crime lab is also up for a cut, despite underfunding in the past, something that both Democrats and Republicans voiced concerns about. Sen. Hob Bryan, D-Amory, said underfunding for the Department of Public Safety meant a delay in services, like autopsies.

"This (means) delays on prosecutions, delays for constituents who need death certificates, and we can't go out and employ enough people to get autopsies done," Bryan said speaking on the bill last week.

Republican Sen. Brice Wiggins, R-Pascagoula, expressed concerns over the cut because the crime lab is "a core function of government," he said. The Senate Appropriations chairman, Sen. Buck Clarke, R-Hollandale, reiterated what he said all last week—that this year will be a tight budget year and an increase in one agency's budget will mean a cut somewhere else.

"If we're going to plus anybody up, we'll have to cut somebody—somebody else takes a cut, that's where we are right now," Clarke said.

Democrats on both the House and the Senate side pointed to tax cuts in the past several years as the underlying reason for the state's shrinking funds. Rep. Steve Holland, D-Plantersville, spoke against the appropriations bill for the Department of Health that essentially cuts their funding in half, after trauma care funds are extracted.

"I didn't vote for a dang one of those tax cuts y'all voted for. I know that's what you're all about, but I'm going to blame you for it too when my county health departments close," Holland said.

The House passed a Department of Health budget that will safeguard trauma-care funding but reduce the rest of the department's funds by almost 50 percent. Health and Human Services Chairman Rep. Sam Mims, R-McComb, said the Department of Health agency directors were not pleased with the budget, but he committed to keep the budget on his radar as the bill moved forward to try to allocate additional funds if they become available.

"We are in challenging times with our state budget, and so we have to make some very difficult choices," Mims told the House last week.

On the Senate side, Democrats also pointed to tax cuts as the reason the state's coffers are running low.

"In regards to this budget in general, I don't particularly have an axe to grind with what the appropriations committee did with what they have, but the point is we have a budget that is below what is necessary," Sen. Bryan said on the floor last week. "And the budget is below where it's necessary not because of anything going on with the economy but because of the unconscionable tax cuts and tax credits we've been handing out."

The state's economist, Darrin Webb, told the Joint Legislative Budget Committee that while the state's economy was growing, tax collections were not. The state is behind on revenue Webb said because of slow income tax growth, a slowing oil industry and not benefiting from inflation unlike other states.

With tight budgets, lawmakers are forced to prioritize what they care to fund the most. So far, that appears to be the state's veterans. In a surprising move last week, the Senate diverted $1.5 million to the state's Veterans Affairs Board out of the Mississippi Authority for Educational Television's budget, which runs the state's public radio and broadcasting channels.

The agency did not respond to the Jackson Free Press by press time.