Canada's Trudeau Arrives in Washington to Meet with Trump 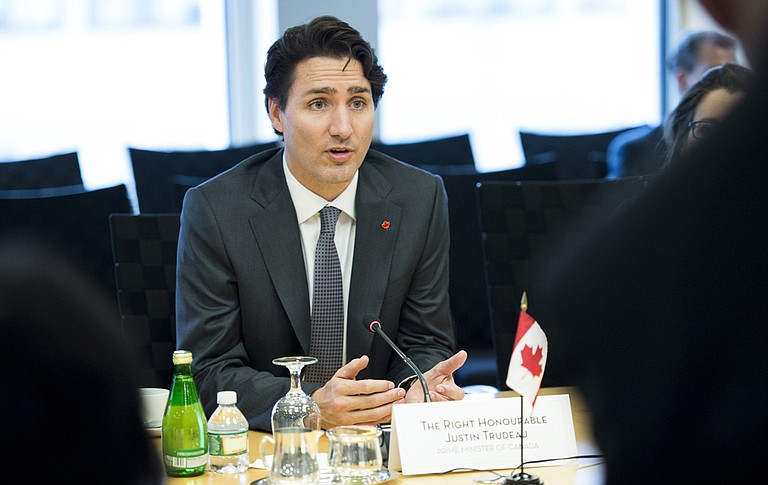 WASHINGTON (AP) — Canadian Prime Minister Justin Trudeau, a polar opposite to Donald Trump in almost every way, joined the new U.S. president at the White House Monday keen to build a relationship that doesn't threaten trade.

Trudeau arrived on a blustery morning, and Trump greeted him with a firm handshake. The neighboring leaders are expected to talk about free trade in their first face-to-face meeting.

Trudeau and Trump will also participate in a roundtable discussion about women in the workplace.

The prime minister's plane landed at Dulles airport after heavy winds forced a change from Andrews Air Force Base.

Trudeau, age 45, and Trump, age 70, have vastly different outlooks of the world.

Trudeau is a liberal who champions free trade and has welcomed 40,000 Syrian refugees. He calls himself a feminist and his Cabinet is 50 percent women. Trump has few women in his Cabinet. He has taken a protectionist stance on trade and wants to crack down on the inflow of migrants and refugees.

Trump's order to temporarily halt entry into the U.S. by people from seven predominantly Muslim nations, which is tied up in court, might come up during his bilateral meeting with Trudeau. But Trudeau is expected to focus on common economic interests.

Relations with the U.S. are crucial as more than 75 percent of Canada's exports go to the U.S., while 18 percent of U.S. exports go to Canada. There are fears among Canadians that they could be hurt as Trump targets Mexico in a re-negotiation of the North American Free Trade Agreement.

A White House official and a senior Canadian government official said the two countries plan to launch a new task force called the United States Canada Council for the Advancement of Women Business Leaders-Female Entrepreneurs. The officials agreed to confirm the move only if they were not quoted by name because they were not authorized to make the information public.

Ivanka Trump, the president's daughter who has been an advocate for policies benefiting working women, was involved in recruiting participants and setting the agenda for the roundtable. Female executives from the United States and Canada are expected to participate.

Trudeau's close cooperation with Trump and the first daughter could ease some worries among Canadians that the U.S. president will enact protectionist measures that could hurt the Canadian economy. It could also alleviate some fears that Trump will be as combative with Trudeau as he has been with the leaders of Mexico and Australia.

The Canadian official said Trudeau's administration had suggested the task force, because the prime minister considers the issue of working women an important part of his agenda and economic growth plan.

"It's a smart thing if Canada proposed this," said Nelson Wiseman, a professor at the University of Toronto. "It takes attention off of NAFTA. And from Trump's point of view, it contributes to softening Trump's image, and he's got a problem with women."

Roland Paris, a former senior foreign policy to Trudeau, said the prime minister needs to build a relationship with Trump to ensure Canada is not shut out economically.

"The overriding priority will be for Canada to maintain secure and reliable access to the U.S. market and the supply chains that crisscross the border," Paris said.

Trudeau, whose father was the late Canadian Prime Minister Pierre Trudeau, has been preparing for the Trump meeting for months. He will also meet with legislative leaders on Capitol Hill.