Ways the State Can ‘Back the Badge’ 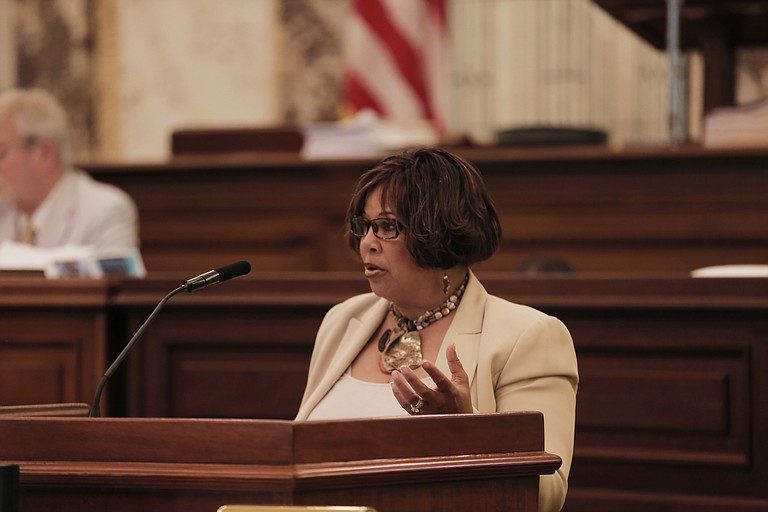 JACKSON — It is clear that lawmakers in both houses of the Mississippi Legislature intend to implement some sort of "Back the Badge" or "Blue Lives Matter" bill this session, but how such a law is written could be up for debate.

The Senate, for its part, passed the "Blue, Red and Med Lives Matter" bill on Thursday, Jan. 26, after an almost two-hour debate. The bill would change the state's hate-crime laws to label misdemeanors and felonies against law-enforcement officers, firefighters and emergency responders as hate crimes.

Racial tensions either ran high or were not apparent at all, depending on which lawmaker was at the podium. Sen. Sean Tindell, R-Gulfport, one of the bill's additional authors, handled the legislation on the floor, saying it was in response to the deadly police shootings in Baton Rouge and Dallas in 2016. Tindell said law-enforcement officers did not request the bill, and he took credit for coming up with it.

"The response I've received has been overwhelming and something they support, and I can tell you, because I do have friends in law enforcement, that morale is pretty low," Tindell said on Jan. 26.

African American lawmakers questioned Tindell extensively and attempted to pass a few amendments to the bill that would give protections to victims of police violence or enable dash-camera legislation. Both amendments failed, but several lawmakers spoke against the bill before it went up for a vote. Sen. Barbara Blackmon, D-Canton, offered an amendment to protect victims of police violence, saying she believed the bill is another way that police officers can target young, black males.

"You haven't walked in our shoes," she told the Senate. "You don't have to be concerned about when your teenagers are out and being stopped by police—I raised two sons. ... Our concern was about our sons making it home alive after being stopped by law enforcement."

Sen. Chad McMahan, R-Guntown, spoke on the bill's final passage, saying that the legislation was not about race, but about law-enforcement officers.

"This has nothing to do with race; this has to do with protecting officers in uniform," he said.

Sen. Sollie Norwood, D-Jackson, spoke on the bill and said he thinks everyone in the Senate wants to support law-enforcement officers. While the state might have some bad folks, he said, there are also some bad policemen who need to be weeded out, too.

"I have to be concerned when my children travel from county to county—voting against this legislation doesn't mean I'm against law enforcement, but I have concerns," he said.

Louisiana passed a similar "Blue Lives Matter" bill last year that added law-enforcement officers to the privileged classes listed in the state's hate-crime laws. Mississippi's hate-crime law, which became law back in 1994, currently adds enhanced penalties for a person who commits a felony or a misdemeanor against a person because of their "actual or perceived race, color, ancestry, ethnicity, religion, national origin or gender of the victim."

Senate Bill 2469 would double penalties for any misdemeanors against law-enforcement officers, which would include things like resisting arrest.

In September 2016, one man in Louisiana was charged with hate crimes against officers there after damaging public property, disturbing the peace and shouting slurs at police officers, Nola.com reported. Later, the New Orleans Police Department said the charges against the man incorrectly applied the state's new hate-crime law, but then deferred to the local district attorney's office to make the decision of dropping the hate-crime charges or not.

The ACLU of Mississippi denounced Senate Bill 2469, saying it does little to protect cops, citing Mississippi law that already has enhanced penalties for assault, shooting or killing a law enforcement officer.

"It has become an us-versus-them mentality that is being pushed, which is us-versus-them rhetoric, when it's not 'Black Lives Matter' or 'Blue Lives Matter.' The reality is that everyone has the right to be protected," she told the Jackson Free Press in a January interview.

"There must be a balance, and so if such bills are being proposed, and if they do become laws, then those laws need to be balanced with laws that require special prosecutors for police-involved shootings."

"This version is preferable to me because I don't want us to get distracted on what we're trying to do here," Gipson told reporters after a Judiciary B Committee meeting on Jan. 26. "We're trying to emphasize our support of law enforcement in the state of Mississippi—that's our number-one priority."

Gipson did not want to bring up hate-crime code sections because he wanted his legislation to be focused on just protecting those in uniform.

"No one was born a law-enforcement officer; they've made a decision and choice to put their lives on the line to protect people in the state of Mississippi and that's different," he said. "I think we need to focus on that and move on."

Both Lt. Gov. Tate Reeves and Gov. Phil Bryant have voiced their support for "Blue Lives Matter" bills this year. Gov. Bryant opened his State of the State address saying "law enforcement is under attack."

Assaults on police officers were up in 2015 compared to the previous year, with 50,212 officers assaulted in 2014, FBI statistics show. In recent years, police-officer assaults spiked in 2011 with more than 54,000 reported.