OPINION: The Business of Us All 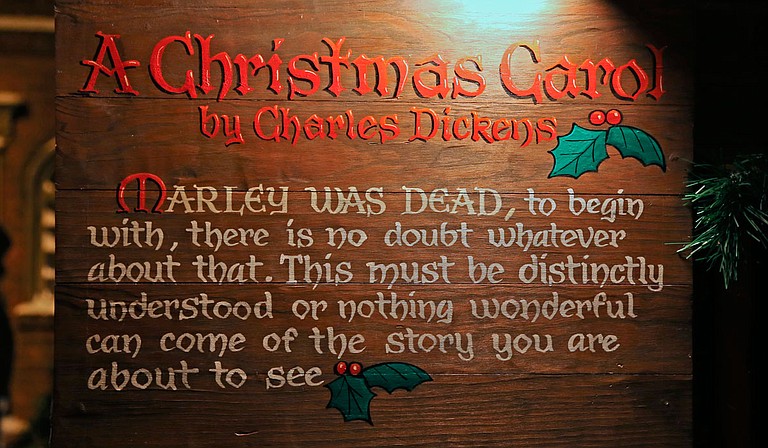 "I have endeavored in this ghostly little book to raise the ghost of an idea," Dickens once wrote about his 1843 tale. "May it haunt (readers') pleasantly, and no one wish to lay it by." Photo courtesy Flickr/JCapaldi

I settled comfortably into my favorite chair one recent night and began watching the best Christmas movie ever: the 1951 version of Charles Dickens' "A Christmas Carol."

No one ever portrayed a better Ebenezer Scrooge than Scottish actor Alastair Sim, who plays to perfection the "squeezing, wrenching, grasping, scraping, clutching, covetous old sinner" whose ghost-and-spirit-inspired conversion later in the story will have him declaring, "I'm not the man I was!"

"I have endeavored in this ghostly little book to raise the ghost of an idea," Dickens once wrote about his 1843 tale. "May it haunt (readers') pleasantly, and no one wish to lay it by."

I've seen the film a dozen times, and yet I keep discovering new things in it. "You were a good man of business," Scrooge tells the ghost of his dead partner, Jacob Marley. "Business!" cries out Marley, rattling the heavy chains his life of greed and lack of compassion for the poor earned him in eternity. "Mankind was my business! Their common welfare was my business!"

Dickens scholar Norrie Epstein says the writer "never failed to weep" whenever he read his story out loud. I'm afraid he'd be sobbing uncontrollably today if he saw how his "ghost of an idea" has fallen on deaf ears.

Here in Mississippi, nearly one out of every three children lives in poverty worse than that of Tiny Tim, whose father, Bob Cratchit, Scrooge so poorly pays that he can't get Tim the medical treatment he needs to save his life.

In fact, Tiny Tim might consider himself fortunate even to be alive if he were in Mississippi, which has the highest infant mortality rate in the nation. Mississippians are more likely to die prematurely than people from any other state. The fact is that Mississippians, young or old, typically don't live as long as people from other states.

When Bob Cratchit begs to take Christmas day off, Scrooge grumbles, "a poor excuse to pick a man's pocket every twenty-fifth of December." Who knows how the old miser (before his conversion) would've reacted if Bob had slipped and hurt himself after coming back to work on Dec. 26? Probably much like Mississippi's Republican leadership. With their gutting of the state's Workers' Compensation protections in 2012, Mississippi Gov. Phil Bryant and his fellow Scrooges in the state Legislature have made sure workers here are the nation's least compensated for work-related injuries and thus the least protected. They are among the country's most at-risk workers. A Mississippi worker is twice as likely to be killed on the job as the typical U.S. worker.

In fact, no one really knows how bad workers have it here in Mississippi because this is one of the nine states that refuse to collect reliable data on serious workplace injuries. Yet hear Bryant's response to the 2012 Workers' Compensation gutting—which added a host of hurdles for workers to jump before they can qualify for compensation: Mississippi has "the most job-friendly environment in America." Friendly for whom? You know. Here's another way to say it: Employers in Mississippi don't have to worry about the "humbug" of being responsible for the safety of their workers.

Like Dickens himself, I confess to shedding a tear or two every time I get toward the end of "A Christmas Carol." After Jacob Marley scares the wits out of the skinflint and then the spirits of Christmas Past, Present and Future do their work on him, Scrooge is a changed man. No more is he the soulless moneylender who tells a Christmas donation seeker that the poor might be better off dead. That way they could help "decrease the surplus population."

At the end, Scrooge is indeed a new man, one whom people would come to say, "No man could keep Christmas as well as Ebenezer Scrooge."

Dickens offers us hope at the end of his tale. Indeed, isn't hope the very heart of the Christmas story? Maybe there's hope even in poor ol' Mississippi, hope that political leaders one day will see in those less fortunate a common humanity—not simply shirkers or ne'er-do-wells—and thus realize "their common welfare" is the business of us all.

Joe Atkins is a veteran journalist, columnist and professor of journalism at the University of Mississippi. Email him at [email protected]. This column does not necessarily reflect the opinions of the JFP.