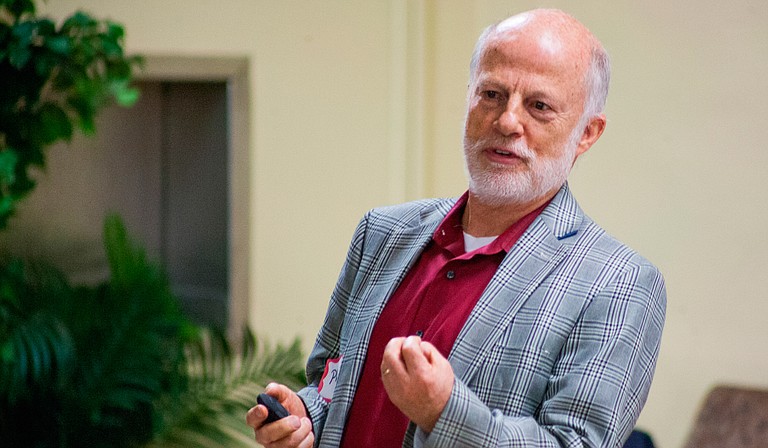 Phil Reed, CEO of Voice of Calvary Ministries, delivered remarks to a room of about 25 community members ranging from a school principal to a formerly incarcerated veteran. Photo by Stephen Wilson.

JACKSON — A couple days before Thanksgiving, John Butalla left prison after spending 14 total years behind bars from 2003 to 2017. He was incarcerated for two sex-related charges: molestation and then possession of child pornography.

Butalla sat eating his lunch at the Voice of Calvary Ministries "New and Good" luncheon it hosted at its church on Dec. 13. VOCM's CEO Phil Reed gave about 25 attendees a recap of his group's mission, history, and successes of the year.

When Reed introduced the Incarcerated Veterans Program based out of Central Mississippi Correctional Facility, he pointed to Butalla.

"It just so happens that one of those guys is here right now," Reed said of Butalla, who was in the program's inaugural class. Through partnership with Soldier On, VOCM offered moral-recognition therapy to veterans nearing release. As part of his slideshow, Reed displayed a poster he said Butalla saw nearly everyday during the program.

"I accept full responsibility for my life, and where it's headed," the poster read.

"It's all about what decision did you make to get you here, not blaming other people. What are you going to do differently after released?" Reed said to the room, before jokingly admitting he'd "whip John's behind if he ever ends up back incarcerated."

With a mindset to avoid the "third strike at all costs," Butalla says he has been readjusting to life on the outside while putting the therapeutic and financial lessons he learned from VOCM in its veterans re-entry program.

"When you're locked away and incarcerated, you forget about what's going on out in the world, and you don't realize everything that's going on," Batalla told the Jackson Free Press. "They helped reconnect us so we could be more prepared to walk out into the world."

Reed works most diligently in west Jackson—"west is best," he says—although the dilapidation, emptiness and crime that have plagued the Zoo area, for instance, makes the work an uphill challenge. By focusing on youth education at as early as 36 months and partnering with early learning academies, Reed wants to help change the narrative in and about west Jackson. He wants to develop a model program there so that "for once, our kids will be at the front of the line." They began "hands-on" teacher training this summer for west Jackson teachers and will do another round in January.

Sara Harper, the principal of McWillie Elementary School, was invited as a community representative with expertise in early childhood education. McWillie is the district's only Montessori school, which serves children as young as 3 years old.

"To me, early education is the most important part in teaching them as young as you can," Harper said. "Because a lot of times when they come into kindergarten, they're already a few years behind, and it's hard to close that gap by the time they get to third grade. Studies show that if they don't pass the third-grade gate, they'll drop out."

Buying Homes, Getting Ahead

After Reed's speech, some attendees exchanged contact information, while others snuck out to return to their jobs. Meanwhile, Butalla hung around, tidying up the room, pushing in chairs and throwing out trash. Reed's wife, Marcia, runs the financial literacy program.

Phil uses Voice of Calvary Ministries board member Sadie Palmer as the poster-child for their success. He said Palmer was the third generation in her family living in subsidized housing, never thinking home ownership could be for her. She graduated from their first Getting Ahead financial literacy program and just five years later in 2014, she purchased a home from VOCM.

Reed says he plans to draw inspiration from the West Jackson Planning Guidebook, which architect Roy Decker developed in 2014. VOCM revamped 37 houses this year with U.S. Housing and Urban Development Neighborhood Stabilization Program funds they obtained through the City of Jackson and the Mississippi Development Authority.

"We've sold 36. We've just got one we're struggling to find a buyer for," Reed told the audience. "If you want to buy a house, we will make you a deal you cannot refuse."

After his public remarks, he told the Jackson Free Press that the last remaining house sits on a block with a lot of blighted and run-down properties that likely make it an unattractive purchase.

Reed said that in collaboration with Rosemont Missionary Baptist Church, New Horizon Ministries and Working Together Jackson, VOCM is going to put 400 to 600 new housing units in west Jackson over the next two years.

"I'd be happy to live in any of those condominiums," Reed said. "They look better than my house on most days."