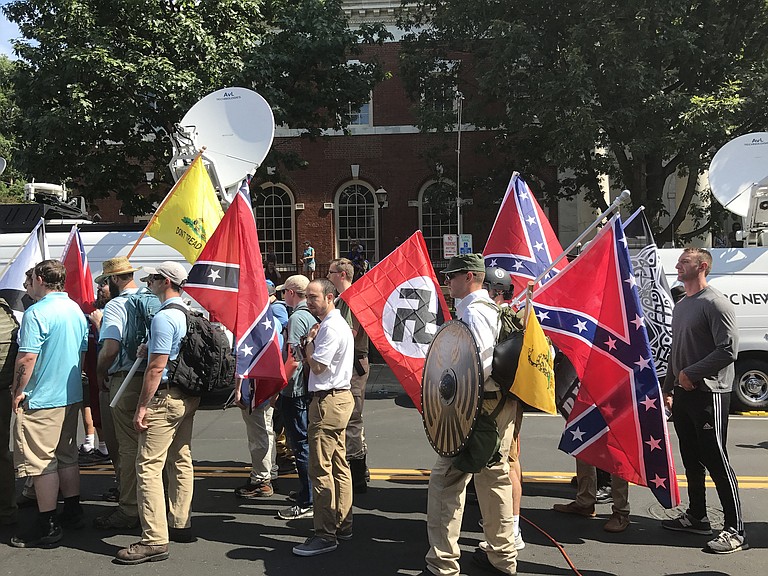 The violence in Charlottesville introduced many Americans to a new brand of hate, bred on internet message boards and migrating to the streets with increasing frequency. Photo courtesy Flickr/Anthony Crider

BOSTON (AP) — Nicholas Fuentes is dropping out of Boston University and heading south, pressing ahead with his right-wing politics despite receiving online death threats.

The 19-year-old joined a white nationalist rally in Charlottesville, Virginia, last weekend and posted a defiant Facebook message promising that a "tidal wave of white identity is coming," less than an hour after a car plowed into a crowd of counter-protesters.

Now, he's hoping to transfer to Auburn University in Alabama.

"I'm ready to return to my base, return to my roots, to rally the troops and see what I can do down there," Fuentes said in an interview this week.

For many schools, the rally in Virginia served as a warning that these groups will no longer limit their efforts to social media or to flyers furtively posted around campus.

"It seems like what might have been a little in the shadows has come into full sun, and now it's out there and exposed for everyone to see," said Sue Riseling, a former police chief at the University of Wisconsin-Madison who is executive director of the International Association of Campus Law Enforcement Administrators.

The violence in Charlottesville introduced many Americans to a new brand of hate, bred on internet message boards and migrating to the streets with increasing frequency.

On the eve of Saturday's rally, young white men wearing khakis and white polo shirts marched through the University of Virginia's campus, holding torches as they chanted racist and anti-Semitic slogans. The next morning, many donned helmets and shields and clashed with counter-protesters before a car drove into the crowd, killing a 32-year-old woman and injuring 19 others.

On Monday, Texas A&M University canceled plans for a "White Lives Matter" rally in September. On Wednesday, the University of Florida denied a request for white nationalist Richard Spencer to rent space on campus for a September event. Spencer and his supporters are promising court challenges.

"If you're sitting on a campus where this hasn't happened, consider this your wake-up call that it might," she said.

Last school year, racist flyers popped up on college campuses at a rate that experts called unprecedented. The Anti-Defamation League counted 161 white supremacist "flyering incidents" on 110 college campuses between September and June. Oren Segal, director of the group's Center on Extremism, said the culprits can't be dismissed as harmless trolls.

"You might have a few that don't take it seriously. But those that do, those are the ones we're concerned about," Segal said.

Matthew Heimbach, the 26-year-old leader of the white nationalist Traditionalist Worker Party, admits that dropping leaflets on campuses is a cheap way to generate media coverage.

"A dollar worth of paper, if it triggers the right person, can become $100,000 in media attention," he said.

As a student at Towson University in Maryland, Heimbach made headlines for forming a "White Student Union" — a group the school refused to formally recognize — and for scrawling messages like "white pride" in chalk on campus sidewalks. His college years are behind him, but Heimbach still views colleges as promising venues to expand his group's ranks. College students are running four of his group's chapters, he said.

"The entire dynamic has changed," Heimbach said. "I used to be the youngest person at white nationalist meetings by 20 or 30 years."

The Foundation for the Marketplace of Ideas, a self-described "alt-right" nonprofit educational group, says it's offering legal assistance to students caught hanging up posters or flyers containing "hate facts." The "alt-right" is a fringe movement loosely mixing white nationalism, anti-Semitism and anti-immigration populism.

One of the foundation's attorneys, Jason Van Dyke, said he represented a student at Southern Methodist University who was accused last year of posting flyers on campus that said, "Why White Women Shouldn't Date Black Men." The student wasn't suspended or expelled, Van Dyke added.

"Just because speech makes someone uncomfortable or offends somebody does not make it a violation of the student code of conduct," he said.

Scores of schools publicly denounced the violence in Virginia this week, including some that learned they enroll students who attended the "Unite the Right" rally.

The University of Nevada, Reno, said it stands against bigotry and racism but concluded there's "no constitutional or legal reason" to expel Peter Cvjetanovic, a 20-year-old student and school employee who attended the rally, as an online petition demanded.

Other schools, including Washington State University, condemned the rally but didn't specifically address their students who attended it.

Campus leaders say they walk a fine line when trying to combat messages from hate groups. Many strive to protect speech even if it's offensive but also recognize hate speech can make students feel unsafe. Some schools have sought to counter extremist messages with town halls and events promoting diversity. Others try to avoid drawing attention to hate speech.

"This is a transparent effort to bait people into overreacting, thereby giving a minuscule fringe group attention it does not deserve, and that we decline to do," Daniels said in a statement at the time.

Cameron Padgett, a 23-year-old senior at Georgia State University, only dabbled in campus activism before he decided to organize a speaking engagement for Spencer this year. Padgett sued — successfully — for Spencer to speak at Auburn University in April after the school tried to cancel the event.

"My motivation from the beginning was just free speech," he said.

Padgett calls himself an "identitarian" — not a white nationalist — and insists "advocating for the interests of white people" doesn't make him a racist. Padgett said he hasn't faced harassment for working with Spencer and doesn't fear any.

"There are a lot of people who just sit behind keyboards," he said. "But what are we doing this for if no one wants to show their face?"

At Boston University, Fuentes says he met a few others with similar views — he considers himself a "white advocate" — but mostly found political kinship online. He hosts his own YouTube show and is prolific on social media, but when he heard about the "Unite the Right" rally, he saw it as a chance to network in the real world.

"It was going from online to actually physically assembling somewhere," he said. "We shake hands, we look people in the eye. We actually have some solidarity in the movement."

So, along with a friend from Chicago, Fuentes booked a flight and headed to Virginia.