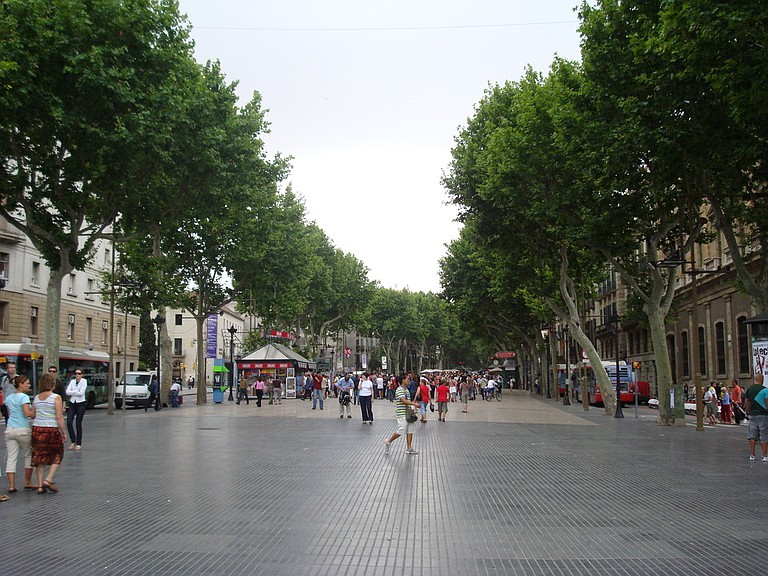 Las Ramblas, a street of stalls and shops that cuts through the center of Barcelona, is one of the city's top tourist destinations. People walk down a wide, pedestrian path in the center of the street but cars can travel on either side. Photo courtesy Flickr/Juan Pablo Ortiz Arechiga

BARCELONA, Spain (AP) — A white van jumped up onto a sidewalk and sped down a pedestrian zone Thursday in Barcelona's historic Las Ramblas district, swerving from side to side as it plowed into tourists and residents. Authorities said 12 people were killed and 80 were wounded, 15 of them seriously, in what they called a terror attack.

The afternoon attack in the northeastern Spanish city was the country's deadliest since 2004, when al-Qaida-inspired bombers killed 192 people in coordinated attacks on Madrid's commuter trains.

It left victims sprawled out in the street, spattered with blood or crippled by broken limbs. Others fled in panic, screaming or carrying young children in their arms. As witnesses and emergency workers tried to help the wounded, police brandishing hand guns launched a search of side streets looking for suspects.

The president of Spain's Catalonia region, Carles Puigdemont, provided the updated casualty figures, correcting an earlier government tweet that said 13 people were killed. He said that two people had been arrested.

Police immediately cordoned off the city's broad avenue and ordered stores and nearby Metro and train stations to close. They asked people to stay away from the area so as not to get in the way of emergency services. A helicopter hovered over the scene.

Police evacuated stores on the sprawling avenue where scores of people had taken cover.

State-owned broadcaster RTVE reported that investigators think two vans were used — one for the attack and a second as a getaway vehicle.

Las Ramblas, a street of stalls and shops that cuts through the center of Barcelona, is one of the city's top tourist destinations. People walk down a wide, pedestrian path in the center of the street while cars can travel on either side.

A taxi driver who witnessed the attack, Oscar Cano, told TV3 the van jumped onto the central pedestrian area at a high speed and swerved from side to side.

Tamara Jurgen, a Dutch visitor who had just arrived, said she and a friend were inside a Zara clothing store steps from Placa Catalunya when the attacker drove down Las Ramblas. They were held inside for more than two hours until police cleared that block.

"Everyone was screaming and running. We had to run up to the roof and throw our bags over a wall. We were all together along this (3-meter, 10-foot) wall and we were scared we were going to have to jump," she said.

Keith Fleming, an American who lives in Barcelona, was watching TV in his building just off Las Ramblas when he heard a noise and went out to his balcony.

"I saw women and children just running and they looked terrified," he said.

He said there was a bang — possibly from someone rolling down a store shutter — and more people ran by. Then police arrived and pushed everyone a full block away. Even people leaning out of doors were being told to go back inside, he said.

Fleming said regular police with guns drawn and riot police were at the end of his block.

"It's just kind of a tense situation," Fleming said.

Carol Augustin, a manager at La Palau Moja, an 18th-century place on Las Ramblas that houses offices and a tourism center, said the van passed right in front of the building.

"We saw everything. People started screaming and running into the office. It was such a chaotic situation. There were families with children. The police made us close the doors and wait inside," she said.

In the years since the 2004 Madrid bombings, Spanish authorities have reported arresting nearly 200 jihadis, but the only deadly attacks were claimed by the Basque separatist group ETA. Those ETA bombings in the past decade claimed five lives in all.

Condolences and offers of help poured in from Spain's allies.

U.S. President Donald Trump wrote on Twitter: "The United States condemns the terror attack in Barcelona, Spain, and will do whatever is necessary to help. Be tough & strong, we love you!"

U.S. Secretary of State Rex Tillerson offered assistance to authorities in Spain and said U.S. diplomats in Spain were helping Americans there. He vowed the United States would never relent in tracking down terror suspects and holding them to account.

"Terrorists around the world should know that the United States and our allies are resolved to find you and bring you to justice," Tillerson said in a statement.

British Prime Minister Theresa May said the U.K. "stands with Spain against terror" while France's president and the mayors of Paris and Nice are among the French dignitaries offering support for Barcelona after a deadly van attack.

French President Emmanuel Macron tweeted Thursday evening: "All my thoughts and solidarity from France for the victims of the tragic attack in Barcelona. We will remain united and determined."

European Commission President Jean-Claude Juncker said "this cowardly attack has deliberately targeted those enjoying life and sharing time with family and friends. We will never be cowed by such barbarism."

Spain has been on a security alert one step below the maximum since June 2015 following attacks elsewhere in Europe and Africa.

Cars, trucks and vans have been the weapon of choice in multiple extremist attacks in Europe in the last year.

The most deadly was the driver of a tractor-trailer who targeted Bastille Day revelers in the southern French city of Nice in July 2016, killing 86 people. In December 2016, 12 people died after a driver used a hijacked trick to drive into a Christmas market in Berlin.

There have been multiple attacks this year in London, where a man in a rented SUV plowed into pedestrians on Westminster Bridge, killing four people before he ran onto the grounds of Parliament and stabbed an unarmed police officer to death in March.

Four other men drove onto the sidewalk of London Bridge, unleashing a rampage with knives that killed eight people in June. Another man also drove into pedestrians leaving a London mosque later in June.