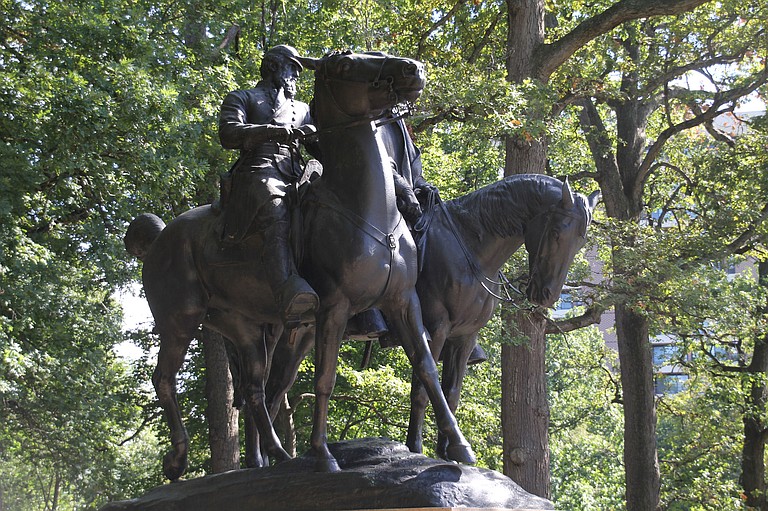 BALTIMORE (AP) — Confederate monuments in Baltimore were quietly removed and hauled away on trucks in darkness early Wednesday, days after a violent white nationalist rally in Virginia that was sparked by plans to take down a similar statue there.

Pugh made the decision Tuesday morning to remove the statues that night, her spokesman Anthony McCarthy said at a news conference Wednesday.

"As soon as I realized they were easy to move," Pugh said.

Pugh said the removal was done overnight deliberately, in order to avoid attention.

"It was important that we move quickly and quietly," Pugh said, "and that's what we did."

Elliott Cummings, a member of the Maryland Sons of Confederate Veterans, denounced Pugh's "barbarism and Taliban-esque actions" in tearing down the statues. "I'm angry and very sad at the same time."

Workers used cranes to lift the towering monument to Robert E. Lee and Thomas J. "Stonewall" Jackson onto a flatbed truck in the dark.

"I did what was right for my city," Pugh said. "Any city that has Confederate statues has concern about violence occurring in their city. Baltimore is right in the midst of getting a consent decree completed, that isn't something that's needed."

Baltimore exploded in civil unrest in the spring of 2015 after a 25-year-old black man died in police custody. The unrest prompted the firing of the city's police chief, and a Justice Department investigation into allegations of abuse and discriminatory policing practices. Earlier this year, the city entered into a court-enforceable agreement to overhaul the department.

Some social justice activists in Baltimore had pledged to take the statues down themselves on Wednesday evening. Protesters in Durham, North Carolina, toppled a monument to Confederate veterans on Monday night.

Pugh said Monday that she had contacted two contractors about removing the monuments. She declined, at the time, to predict when they would come down, saying she wanted to prevent the kind of violence seen in Charlottesville, Virginia. Pugh has said she wants the statues to be placed in Confederate cemeteries elsewhere in Maryland. On Wednesday, Pugh suggested that plaques be placed at each of the monument sites explaining what had been there.

A commission appointed by the previous mayor recommended removing a monument to Marylander Roger B. Taney, the U.S. Supreme Court justice who wrote the Dred Scott decision denying citizenship to African-Americans, as well as a statue of two Virginians — the Confederate generals Lee and Jackson. All were removed overnight, along with a monument to Confederate sailors and soldiers and women.

Meanwhile, in Los Angeles, a stone monument at Hollywood Forever Cemetery commemorating Confederate veterans was taken down Wednesday after hundreds of people demanded its removal. But in Tampa, Florida, the Hillsborough County Commission decided that if enough private money isn't raised to move a Confederate monument to a private cemetery it will remain on public property.

Baltimore's swift removal of its monuments comes days after what's believed to be the largest gathering of white supremacists in a decade — including neo-Nazis, skinheads and Ku Klux Klan members. They descended on Charlottesville for a rally prompted by the city's decision to remove a monument to Lee.

Violent clashes broke out between white nationalists and counter protesters and a woman, 32-year-old Heather Heyer, was killed when a car plowed into a crowd of people who were there to condemn the white nationalists.

Lawrence Grandpre is research director Leaders of a Beautiful Struggle, an activist group that advocates for "the public policy interest of Black people." He said the statues represent a host of problematic social and cultural structures. Tearing down the physical monument is only the beginning, he said.

"The biggest monument to the Confederacy in America and in Baltimore is the prison and police system," Grandpre said. He said it's important to "deal with racist structures, not just racist statues."

Greg Baranoski was walking his dog in Baltimore's Mt. Vernon neighborhood just after midnight Wednesday morning when he saw a crew taking down the Taney statue. It took about 40 minutes, he said.

"It was the fastest thing I've ever seen the city do," he said. "It was amazing, really amazing."

Baranoski said that until recently, he admired the monuments as pieces of art even though he didn't agree with "what they stood for." But he said in the past few days, he's come to believe they should be removed.

"It'd be super poetic to replace the statue of Chief Justice Taney with Justice Marshall," he said.