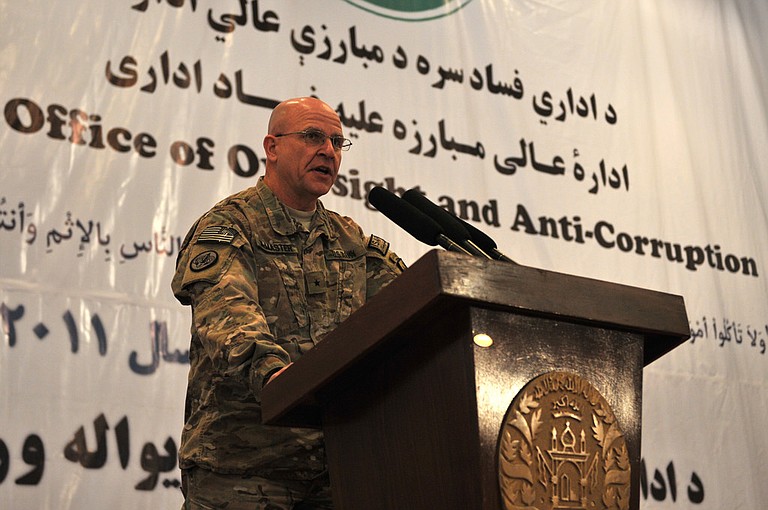 Trump's national security adviser, H.R. McMaster, said Sunday that he considered the attack to be terrorism. On Saturday, Trump had not responded to reporters' shouted questions about terrorism. Photo courtesy Flickr/U.S. Air Force

BEDMINSTER, N.J. (AP) — The White House scrambled Sunday to elaborate on President Donald Trump's response to deadly, race-fueled clashes in Charlottesville, Virginia, as he came under bipartisan scolding for not clearly condemning white supremacists and other hate groups immediately after the altercations.

As the chorus of criticism grew, White Houses aides were dispatched to the morning news shows, yet they struggled at times to explain the president's position. A new White House statement on Sunday explicitly denounced the Ku Klux Klan and neo-Nazi groups, but it was attributed to an unnamed spokesperson and not the president himself. Vice President Mike Pence, traveling in South America, condemned "these dangerous fringe groups" and said they "have no place in American public life and in the American debate."

Trump, meanwhile, remained out of sight and silent, save for a few retweets. One was about two Virginia state policemen killed in a helicopter crash while monitoring the Charlottesville protests, another about a Justice Department probe into the violence.

In the hours after a car plowed into a group of anti-racist counter-protesters on Saturday, Trump addressed the violence in broad strokes, saying that he condemns "in the strongest possible terms this egregious display of hatred, bigotry and violence on many sides, on many sides."

The White House statement Sunday went further. "The president said very strongly in his statement yesterday that he condemns all forms of violence, bigotry and hatred and of course that includes white Supremacists, KKK, neo-Nazi and all extremist groups." It added: "He called for national unity and bringing all Americans together."

The White House did not attach a name to the statement. Usually, a statement would be signed by the press secretary or another staffer; not putting a name to one eliminates an individual's responsibility for its truthfulness and often undercuts its significance.

Trump's national security adviser, H.R. McMaster, said Sunday that he considered the attack to be terrorism. On Saturday, Trump had not responded to reporters' shouted questions about terrorism.

"I certainly think anytime that you commit an attack against people to incite fear, it is terrorism," McMaster told ABC's "This Week." ''It meets the definition of terrorism. But what this is, what you see here, is you see someone who is a criminal, who is committing a criminal act against fellow Americans."

The president's homeland security adviser, Tom Bossert, defended the president's initial statement by suggesting that some of the counter-protesters were violent, too. When pressed during a contentious interview on CNN's "State of the Union," he specifically condemned the racist groups.

The president's daughter and White House aide, Ivanka Trump, tweeted Sunday morning: "There should be no place in society for racism, white supremacy and neo-nazis."

Virginia Gov. Terry McAuliffe, a Democrat, said he spoke to Trump in the hours after the clashes and that he twice told the president "we have to stop this hateful speech, this rhetoric." He said he urged Trump "to come out stronger" against the actions of white supremacists.

On Saturday, Republicans joined Democrats in criticizing the president for not specifically calling out white nationalists. Sen. Cory Gardner, R-Colo., tweeted: "Mr. President - we must call evil by its name. These were white supremacists and this was domestic terrorism." Added Sen. Marco Rubio, R-Fla.: "Nothing patriotic about #Nazis,the #KKK or #WhiteSupremacists It's the direct opposite of what #America seeks to be."

The president did not have any public events on Sunday. White House staff did not share any information on his activities except that he and his staff were monitoring the aftermath of the violence in Virginia.

White nationalists had assembled in Charlottesville to vent their frustration against the city's plans to take down a statue of Confederal Gen. Robert E. Lee. Counter-protesters massed in opposition.

Trump's initial comments drew praise from the neo-Nazi website Daily Stormer, which wrote: "Trump comments were good. He didn't attack us. He just said the nation should come together. Nothing specific against us. ... No condemnation at all." The website had been promoting the Charlottesville demonstration as part of its "Summer of Hate" edition.

Charlottesville Mayor Michael Signer, a Democrat, slammed Trump's stance toward hate groups, saying on NBC's "Meet the Press" that he hopes Trump "looks himself in the mirror and thinks very deeply about who he consorted with."

"Old saying: when you dance with the devil, the devil doesn't change, the devil changes you," Signer said.

In Cartagena, Colombia, Pence responded to a reporter's question about the violence in Charlottesville and said, in part: "We have no tolerance for hate and violence, white supremacists or neo-Nazis or the KKK. These dangerous fringe groups have no place in American public life and in the American debate, and we condemn them in the strongest possible terms."

Trump, as a presidential candidate, frequently came under scrutiny for being slow to offer his condemnation of white supremacists. His strongest denunciation of the movement has not come voluntarily, only when asked, and he occasionally trafficked in retweets of racist social media posts during his campaign. His chief strategist, Steve Bannon, once declared that his former news site, Breitbart, was "the platform for the alt-right."