Man Accused of Ramming Protesters Was Photographed with Racist Group 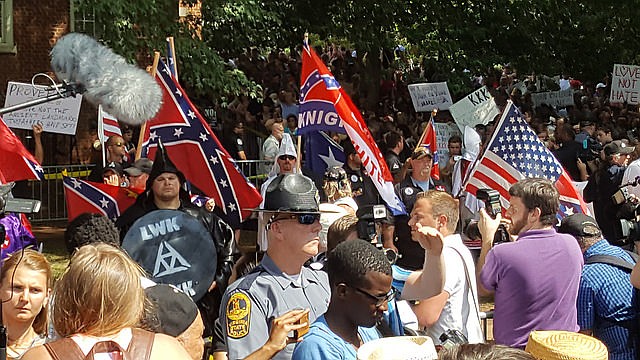 White supremacists gathering in a confrontational display in Charlottesville, Virginia, on a day that ended in tragedy. getfree_360/flickr

CHARLOTTESVILLE, Va. (AP) — The driver of a car accused of crashing into a crowd protesting a white supremacist rally in Virginia had been photographed hours earlier carrying the emblem of one of the hate groups that organized the "take America back" campaign.

Vanguard America denied on Sunday any association with the suspect. A separate hate group that organized the initial rally pledged on social media to organize future events that would be "bigger than Charlottesville."

Meanwhile, the mayor of Charlottesville and political leaders of all political stripes vowed to combat the hate groups and urged President Donald Trump to forcefully denounce the organizations that had promoted the protest against the removal of a Confederate statue. Some of those groups specifically cited Trump's election after a campaign of racially charged rhetoric as validation for their beliefs.

Attorney General Jeff Sessions announced late Saturday that federal authorities will pursue a civil rights investigation into the circumstances surrounding the crash. The violence and deaths in Charlottesville "strike at the heart of American law and justice," Sessions wrote. "When such actions arise from racial bigotry and hatred, they betray our core values and cannot be tolerated."

Police charged James Alex Fields Jr. with second-degree murder and other counts after a silver Dodge Challenger they say he was driving barreled through a crowd of counter-protesters, killing a woman and wounding at least 19.

In a photo taken by the New York Daily News, Fields, a 20-year-old who recently moved to Ohio from Kentucky, stands with a handful of men, all dressed similarly in the Vanguard America uniform of khakis and white polo shirts. The men hold white shields with a black-and-white logo of two axes.

The Confederate statue of Robert E. Lee is in the background. The Daily News said the photo was taken about 10:30 a.m.

Charlottesville officials say Fields crashed his car into the crowd at 1:42 p.m. The Anti-Defamation League says the group believes the U.S. is an exclusively white nation, and uses propaganda to recruit young white men online and on college campuses.

In a Twitter post, the group said it had handed out the shields "to anyone in attendance who wanted them," and denied Fields was a member. "All our members are safe an (sic) accounted for, with no arrests or charges."

In blog posts that appeared Saturday after the violence, the Daily Stormer, a leading white nationalist website that promoted the Charlottesville event, pledged to hold more events "soon."

The two sides quickly clashed, with hundreds of people throwing punches, hurling water bottles and unleashing chemical sprays. Some came prepared for a fight, with body armor and helmets. Videos that ricocheted around the world on social media showed people beating each other with sticks and shields. Amid the violence, the Dodge Challenger tore through the crowd.

The impact hurled people into the air and blew off their shoes. Heather Heyer, 32, was killed as she crossed the street.

"It was a wave of people flying at me," said Sam Becker, 24, sitting in the emergency room to be treated for leg and hand injuries.

Those left standing scattered, screaming and running for safety. Video caught the car reversing, hitting more people, its windshield splintered from the collision and bumper dragging on the pavement. Medics carried the injured, bloodied and crying, away as a police tank rolled down the street.

Virginia's governor declared a state of emergency, police in riot gear ordered people out of the streets, and helicopters circled overhead, including one that later crashed, killing two state police troopers. Officials had not provided a crowd estimate but it appeared to number well over a thousand.

Fields' mother, Samantha Bloom, told The Associated Press on Saturday night that she knew her son was attending a rally in Virginia but didn't know it was a white supremacist rally.

"I thought it had something to do with Trump. Trump's not a white supremacist," said Bloom.