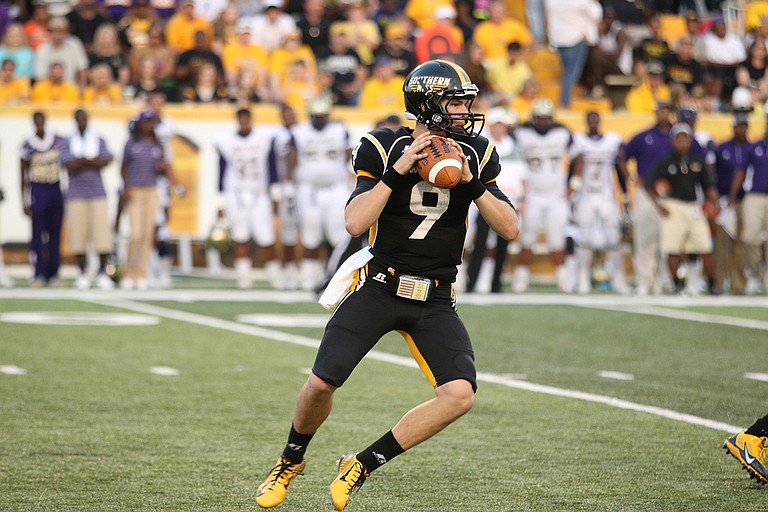 Southern Miss will have to maintain its momentum with a new quarterback. Four-year starter Nick Mullens (pictured) is now gone and there's a preseason battle under center between sophomore Keon Howard and junior Kwadra Griggs. Photo courtesy USM Athletics

Southern Mississippi rebounded from one of the most dismal periods in program history with back-to-back winning seasons in 2015 and '16.

Now second-year coach Jay Hopson is out to prove the Golden Eagles will continue their winning ways.

Southern Miss will have to maintain its momentum with a new quarterback. Four-year starter Nick Mullens is now gone and there's a preseason battle under center between sophomore Keon Howard and junior Kwadra Griggs.

Hopson expects the competition between Howard and Griggs to last all the way through training camp and possibly into the regular season. Howard was Mullens backup last season, completing 22 of 50 passes (44 percent) for one touchdown and four interceptions. Griggs is a junior college transfer who redshirted last season.

"They've been back and forth — that's the reality of it," Hopson said.

Hopson hopes that whoever wins the job will be helped by several veterans around him. Ito Smith led the Golden Eagles with 1,459 yards rushing last season and 17 touchdowns. Six of the team's top seven receivers return, including Allenzae Staggers, who caught 63 passes for 1,165 yards and seven touchdowns.

Southern Miss will be much less experienced on defense. The Golden Eagles will be replacing four of the team's top six tacklers from last season. They do have some experience in the secondary — Picasso Nelson, Cornell Armstrong and Curtis Mikell are all seniors.

"We need to stay healthy at some spots, but that's just the reality of football," Hopson said. "You cut us open and we're bigger and faster, but we're also younger."

Here are a few things to watch for the Golden Eagles this season:

WHAT A TURNAROUND: Southern Miss was one of the nation's worst programs just a few years. The Golden Eagles went 0-12 in '12, 1-11 in '13 and 3-9 in '14 before former coach Todd Monken led Southern Miss to a 9-5 season in '15. Monken left to become the offensive coordinator with the Tampa Bay Buccaneers and Hopson took over, taking the Golden Eagles to another bowl game in his first season.

POCKET ROCKET: Southern Miss RB Ito Smith isn't a big guy at 5-foot-9 and 193 pounds, but he's had a hugely productive career for the Golden Eagles, rushing for more than 3,000 yards over his first three seasons. He's got a shot to become one of the school's all-time leading rushers, though it's unlikely he'll catch Damion Fletcher — who ran for 5,302 yards from 2006 to '09 — at the No. 1 spot.

SEASON OPENER: Southern Miss gets to host a Southeastern Conference opponent in the season opener when Kentucky comes to town on Sept. 2. It's fairly rare for the Golden Eagles to host an SEC opponent, though Mississippi State came to M.M. Roberts Stadium in 2015. Southern Miss beat Kentucky 44-35 last season in Lexington.