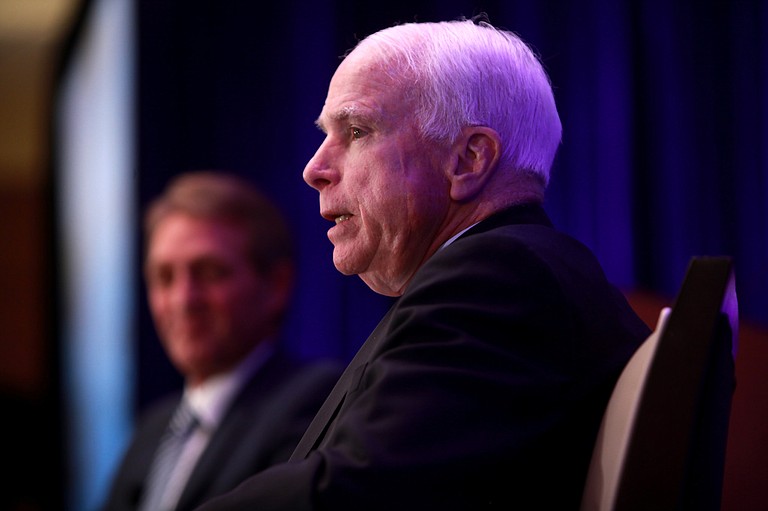 Shortly after his vote, Sen. John McCain said he opposed the GOP health care bill because it fell short of the Republican promise to repeal and replace the 2010 law with meaningful reform. Photo courtesy Flickr/Gage Skidmore

In a radio interview Tuesday with AM560 "Chicago's Morning Answer," Johnson answered questions about the collapse of the years-long Republican effort to repeal and replace Barack Obama's Affordable Care Act, his criticism of the process and McCain's dramatic vote.

McCain, who had been diagnosed with brain cancer, had returned to the Senate that week for the critical votes, lifting GOP hopes and then dashing them.

"He has a brain tumor right now. That vote occurred at 1:30 in the morning. Some of that might have factored in," Wisconsin's Johnson said.

That surprised the interviewer, who asked, "Really?" and wondered whether the senator's illness and the late night affected his judgment.

Johnson said he didn't want to speak for any other senator, "I don't know exactly what. ... I really thought John was going to vote yes."

Responding to Johnson, McCain spokeswoman Julie Tarallo said Wednesday, "It is bizarre and deeply unfortunate that Senator Johnson would question the judgment of a colleague and friend. Senator McCain has been very open and clear about the reasons for his vote."

Amid questions about his comments, Johnson issued a statement on Wednesday, saying: "I'm disappointed I didn't more eloquently express my sympathy for what Sen. McCain is going through. I have nothing but respect for him and the vote came at the end of a long day for everyone."

Shortly after his vote, McCain said he opposed the bill because it fell short of the Republican promise to repeal and replace the 2010 law with meaningful reform. McCain returned to Arizona after the vote for radiation and chemotherapy treatments for his brain cancer.

Though Johnson ended up backing Majority Leader Mitch McConnell, R-Ky., on all four key health care votes last month, he was a repeated annoyance for party leaders on the issue.

A week before debate on the bill began in late July, Johnson signaled he might vote against the measure after accusing McConnell of "a real breach of trust." Johnson said McConnell had told moderate GOP senators that Medicaid cuts imposed by the bill would "never happen."

A month earlier, Johnson was among four GOP senators who, minutes after McConnell unveiled his initial bill, said they opposed it. They said in a joint statement the measure fell short of "the most important promise that we made to Americans: to repeal Obamacare and lower their health care costs."