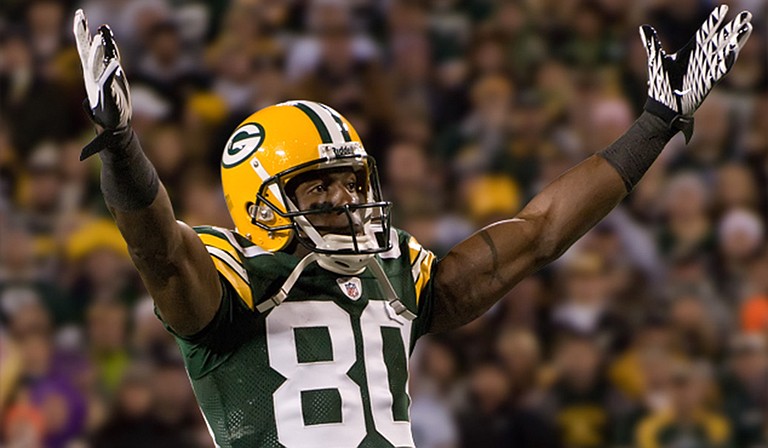 Wide receiver Donald Driver is without question one of the greatest athletes in the history of Alcorn State University. Even though he played just three season for the Braves, he still ranks in the top 10 in the school's history in receiving yards and touchdowns.

During his first season with the Braves in 1996, Driver only caught 12 passes for 249 and made one touchdown. In his second season, he improved his stats with 21 receptions for 556 yards and six touchdowns.

In his final college-football season in 1998, he gained national attention with 55 receptions for 1,128 yards and 10 touchdowns, and earned second-team All-SWAC offensive honors.

The Houston native finished his career with 1,933 receiving yards, 88 catches and 17 touchdowns. He also happened to be a standout track athlete while in college and even qualified for the 1996 Olympics in the high jump. He was a five-time Southwestern Athletic Conference Athlete of the Year recipient for football and track.

The Green Bay Packers selected Driver with the 213th pick in the seventh round of the 1999 NFL Draft. He turned out to be one of the best draft picks in the team's history and is also the last Alcorn State player that an NFL team has drafted since.

Driver's career started slowly, as he only played in six games with no starts in his rookie season. That year, he caught just three passes for 31 yards and made one touchdown.

Over the next two seasons, he played in 29 games and made four starts. He caught 34 passes for 489 yards with two touchdowns, as well as 42 yards rushing on four carries with one touchdown over those two seasons.

In his fourth season in the league, Driver exploded onto the national scene. He started all 16 games with the Packers and made 70 catches for 1,064 yards and nine touchdowns. He added 70 rushing yards on eight carries.

In quarterback Brett Favre's final two seasons with Green Bay, 2006 and 2007, Driver regained his Pro Bowl form, as he was named to the Pro Bowl for both seasons. In his early 30s, the wide receiver was having some of the best years of his career. He caught 92 passes for 1,221 yards with eight touchdowns in 2006 and caught 82 passes for 1,048 with two touchdowns in 2007.

Favre left the Packers in 2008, and Driver started catching passes from new starter Aaron Rodgers. The Green Bay receiving unit was also getting younger as the former Alcorn star was aging.

Driver still held onto a starting spot and caught 70 passes for 1,061 yards with six touchdowns, which earned him a fourth and final Pro Bowl in 2009.

The wide receiver finally reached the Super Bowl in his 12th season in the league. He and the Packers faced the Pittsburgh Steelers in Super Bowl XLV. Driver made two catches for 28 yards before leaving the game with an ankle injury. Green Bay still won the game 31-25, which gave the receiver the only Super Bowl victory of his career.

Younger receivers slowly reduced Driver's role over the next two seasons. He retired after the 2012 season after spending 14 years in the league, all of them with the Packers.

By the end of his career, he had played in 205 games, which is the second most in Packers history, behind only Favre. Driver's 753 receptions and 10,137 yards are team records, and his 62 touchdowns grabs are the fifth most in team history.

Since his football career ended, he has become a best-selling author and won season 14 of "Dancing with the Stars."

On July 22, he was inducted into the Green Bay Packers Hall of Fame along with cornerback Mark Lee.