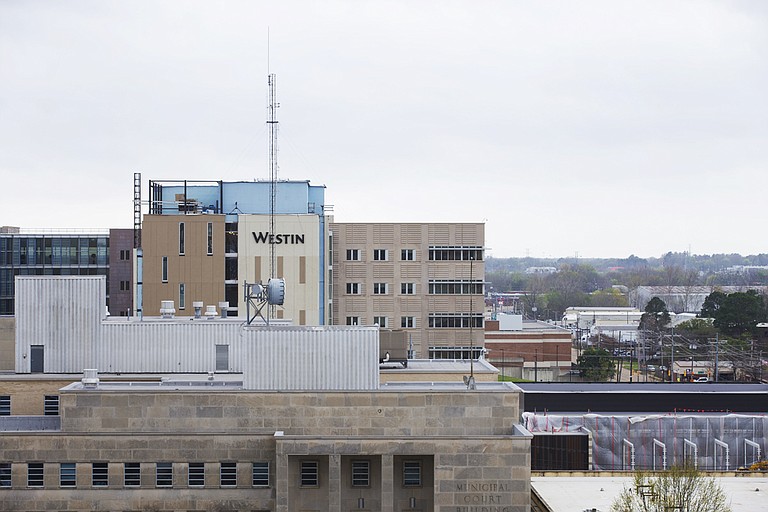 When the Westin Jackson hotel (pictured) opens in August 2017, it will be bringing a new restaurant to downtown Jackson with it: Estelle Wine Bar & Bistro. Photo by Imani Khayyam.

The Jackson Medical Mall Foundation will host the grand opening and ribbon-cutting ceremony for Woodrow Wilson Place on Wednesday, April 12, at 10 a.m.

Jackson Mayor Tony Yarber will cut the ribbon and speak at the event, which is open to the public, and will feature refreshments. The businesses on site will host open houses and tours of the facilities in addition to offering door-prize giveaways.

Thimblepress, which Kristen Ley first opened in downtown Jackson in 2011, recently began selling an exclusive collection of items at Target stores on March 19. The new Thimblepress line features 21 products, including wrapping paper, stationery, floral aprons, floral bud vases and more, and are exclusively available at nearly every Target nationwide and at target.com. The items range from $2 to $16.

When the Westin Jackson hotel (407 S. Congress St.) opens in August 2017, it will be bringing a new restaurant to downtown Jackson with it: Estelle Wine Bar & Bistro.

A release from Westin Hotel group describes Estelle as a cafe bar by day and an upbeat hotspot at night, featuring modern American dishes fused with European influences.

"Estelle is going to be open for breakfast, lunch and dinner, and will cater to people from the suburbs, downtown residents and business people alike," Mike Burton, general manager of Westin Jackson, told the Jackson Free Press. "Our dinner and lunch menu will especially appeal to the downtown business crowd. Our closeness to places like Thalia Mara Hall, the Jackson Convention Center, the Mississippi Museum of Art and plenty more places, means we're in a great position to provide a unique dining option to people going to see a play, for example, who can then come back, have a glass of wine and stay with us."

The restaurant will have a wine bar and lounge, a patio and an open kitchen. Estelle's menu will feature locally sourced produce and ingredients, appetizers and shareable plates, and entrees such as char-grilled tuna, salmon sashimi, grilled fish and steaks. The restaurant will also have a wood-fired oven for preparing flatbreads and pizzas.

"I was once a chef myself in Cape Cod, Massachusetts, and when I came down to Jackson, I was so impressed with the restaurant scene here," Burton said. "I didn't realize just how prevalent seafood is here in Jackson, for one, and I love it here for that. When we announce our head chef for Estelle in a few weeks, I think people are going to see how we've made sure to understand the kind of great establishments Jackson is known for to create a great menu of our own."

The Credit Unions of Mississippi are treating the first 2,500 guests to the Jackson Zoo on Saturday, April 15, to free admission for the third annual CU at the Zoo. The event celebrates National Credit Union Youth Month, and will include educational materials to help children learn about saving.

CU at the Zoo will offer activities and games such as an inflatable obstacle course, a bounce house, face painting and a scavenger hunt for guests to visit each credit-union booth, with the winner receiving a $250 cash prize.