A Love Tale of Two Cities 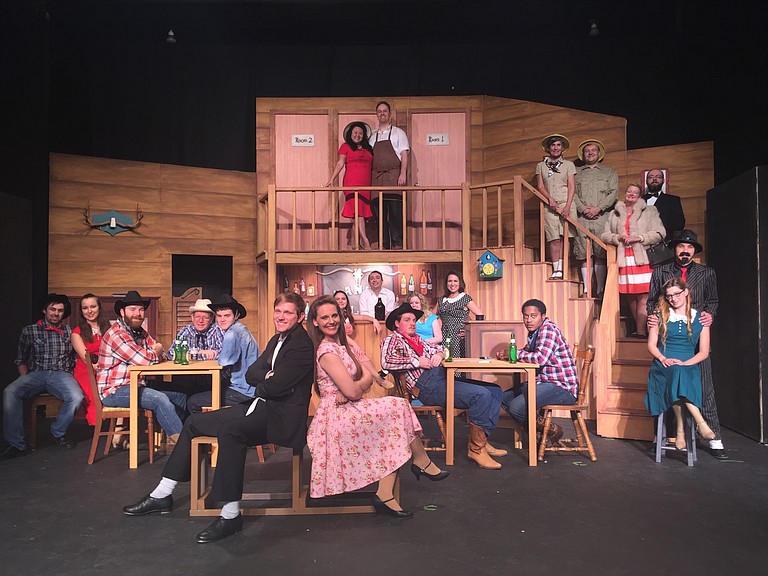 The black curtains of the stage are drawn. In their place are panels painted red, giving the illusion of another set of curtains. In this scene of "Crazy for You," it's rehearsal, and on the stage are two men who are backstage at a theater in New York City. One is the stage owner, and the other is a theater hopeful named Bobby Child. Over the next few minutes, Bobby shows his best dancing and singing skills to impress the owner. But despite his passionate attempt, his performance falls short. This is only the beginning for Bobby, who Dustin Barron plays in Black Rose Theatre's production of the romantic comedy, "Crazy for You."

"Crazy for You" is set in 1940s New York City and in the small town of Deadrock, Nev. A situation forces theater-obsessed banker Bobby to choose between his family's desires and what he wants. His mother sends him to Deadrock to foreclose on a local theater. Once there, he meets and falls in love with Polly Baker, the only woman living in the town. For the duration of the play, Bobby embarks on a mission to fight for the stage and for Baker.

Tommy Hoffman, who was the musical director for "Nunsense" at Black Rose and "Sweeney Todd: The Demon Barber of Fleet Street" at the Center Players Community Theatre in Madison, is directing Black Rose's production. He scheduled about seven weeks for rehearsals.

One of the actors in the play, which is composed of amateur actors, is veteran performer Jennifer Allyn Wilder, who plays Polly Baker and is also the assistant choreographer for the show. She commands the stage as the only woman surrounded by six cowboys who are ready to do anything to save her family's theater.

Wilder says playing Polly came naturally because, like her character, she grew up watching her mom in the theater. Still, she has thought hard about how to bring the character's persona to life and honor the time period.

"It's a lot of thought about 'What is she doing here? Why is she doing it? What would she be doing at this point to get her to that point?'" Wilder says. "It's really just piecing it all together from start to finish, so I can relate to who she is as an individual instead of just me playing her."

Along with the costumes, much of the set creates the 1940s feel. Brenda Black designed the set with her husband David Black. A collection of bi-fold flats line the stage and create the city backdrop of both New York skyline and the multiple store fronts of Deadrock. Brenda and David sought Broadway during the '40s, along with movies of that time, to find inspiration for designing the set.

Something particularly notable about the play is the music from Ira and George Gershwin. A few of the songs in "Crazy For You" are already well-known in many households. Choreographer Cheryl Abernathy says most people probably know "Someone to Watch Over Me." Abernathy relied on dance styles of jazz, tap and soft-shoe to fill in the musical numbers in a way that's true to the setting of the play. While Abernathy is responsible for a lot of the group numbers, Wilder takes on smaller numbers for Bobby and Polly and duets or small groups between characters. The dances include some ballroom numbers such as a quick-paced waltz or something Wilder calls "act dancing," which are "dance moves but not actually dancing mostly acting," she says.

The set changes, costumes, and music and dances allow the actors to bring the characters to life. The finale calls for all 21 cast members to act and dance on stage together, bowing to a medley of songs from the show.